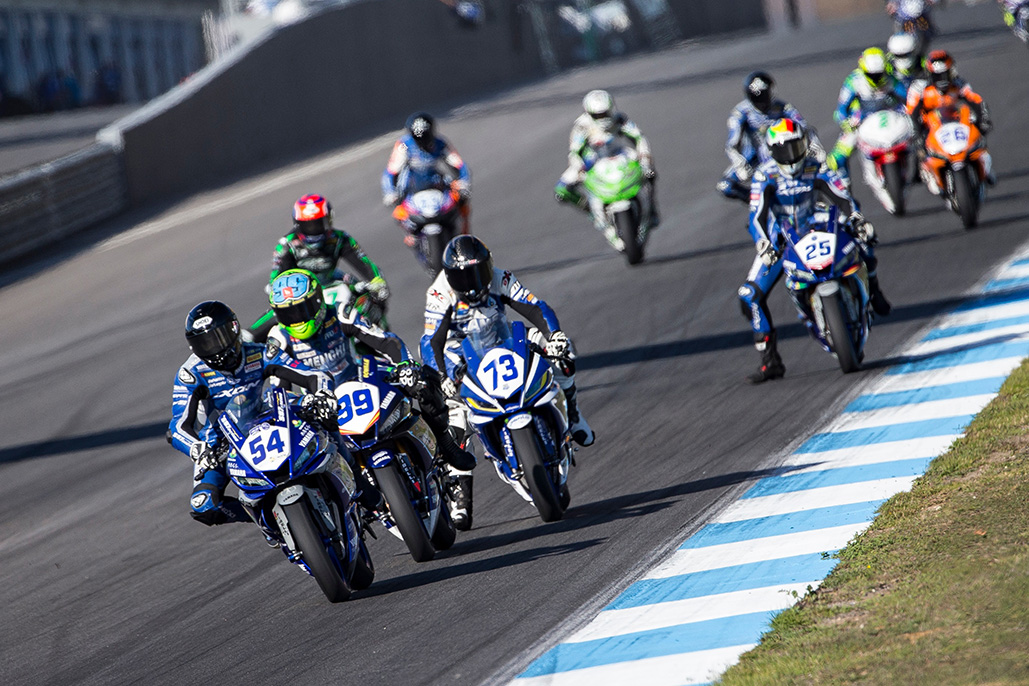 For the first time, WorldSSP300 visited Circuito Estoril for the final double-header of the coronavirus-affected season. On the new track, the bLU cRU riders found the limits of both the circuit and their R3 GYTR kitted bikes and by the end of the first day it was 2020 rookie Alvaro Diaz who was fastest of the Yamaha youngsters in fifth.

Following FP3 on Saturday morning, all five bLU cRU entrants had done enough to automatically qualify for the races, with Yamaha MS Racing’s Alan Kroh impressive in fifth, ahead of teammate Ton Kawakami, who was ninth, while Biblion Motoxracing Yamaha’s Diaz was 13th.

Sofuoğlu and Orradre, both heading into the weekend with a chance at finishing top three in the standings, struggled to piece together the perfect lap and were both outside the top 20 but would join their fellow bLU cRU riders in the qualifying session.

In the Superpole, 16-year-old Spanish rider Orradre upped his pace and qualified eighth for the race grids. Kawakami continued to show consistency in 13th, with Sofuoğlu 21st, Diaz 27th and Kroh 28th.

Saturday’s frenetic Race 1 saw Brazil’s Kawakami avoid the chaos around him to finish a respectable 10th, with Sofuoğlu climbing into the points-paying positions in 14th. Diaz and Kroh made progress through the field, just missing out on the top 15 in 18th and 19th respectively, as Orradre was caught up in an unavoidable incident, forcing him to retire while in the battle for a top five finish.

After a promising Warm Up, in which Sofuoğlu placed as the top bLU cRU rider in third, with Orradre, Kawakami and Kroh all inside the top 10, Race 2 saw the Turkish youngster produce another thrilling fightback through the field. The Jerez and Aragon race-winner climbed into the podium battle with four laps remaining and was third heading into the final corner on the last lap. However, with the long run to the line, he was defenseless to the slipstream behind and finished just 0.067s adrift of the podium in fourth.

Orradre scored his first points finish since the Teruel round after a run of bad luck in 13th, ahead of Kawakami and Kroh, who rounded out the points positions in 14th and 15th. Diaz was also making a comeback into the top 20, but could only match his result from Saturday in 18th.

That concludes the 2020 season, with all five bLU cRU riders demonstrating a great amount of potential and progress at world championship level. Sofuoğlu and Orradre were both winners, while Kawakami, Diaz and Kroh all ended the season with top 10 finishes.

Bahattin Sofuoğlu: P14 & P4
Biblion Motoxracing Yamaha WorldSSP300 Supported Team
“The weekend started like I expected for the Free Practice sessions and after my team changed the engine for the second day, it was not as good as expected. In the end, we reverted back to the old engine and changed something on the gearing for the last day of the weekend, which was much better compared to the Saturday. In Race 2, me and the team did the best we could and I finished fourth. Thanks to the team, the bLU cRU and all my supporters for everything they’ve done for me this year.”

Ton Kawakami: P10 & P14
Yamaha MS Racing WorldSSP300 Supported Team
“The final weekend was quite difficult. It was a new track, I was pushing in every corner and learnt a lot in Friday’s free practice sessions. In the race, the sprocket was a bit too small, I was getting caught in the middle of the straights. We still had two good races and finished in the top 15 to score some points. We worked a lot on the mental side and for next year I need to focus on making overtakes and moving forward in the races. Thanks to everyone for their support and I’ve felt I’ve made a step in the right direction for my career.”

Unai Orradre: DNF & P13
Yamaha MS Racing WorldSSP300 Supported Team
“I really liked the Estoril track and enjoyed the weekend a lot. In Free Practice we tried a few new things on the bike and ahead of the Superpole we made some suspension changes, which allowed me to qualify on the third row. In the race, I was fighting for the podium places, but someone fell off in front of me and I couldn’t go anywhere to avoid them. On Sunday, the bike felt really good but I couldn’t finish higher than 13th. I’m happy with the work we did this weekend and overall I’m pleased with how the season’s gone. I learnt a lot about the tyres, doing a good lap in Superpole and how to stay in the top group during the races. Thanks to Yamaha and all my sponsors, it has been a good year.”

Alan Kroh: P19 & P15
Yamaha MS Racing WorldSSP300 Supported Team
“I am very happy with the last race weekend of the season. I was in the top 10 after Friday, which was a great start for me. I didn’t qualify well but made up a lot of positions in the opening race. In Warm Up we changed the set-up and it felt even better. In the last race, I had a good start and was in the front group and eventually we scored one point in 15th, which I was really happy with. This year was too short because of the Covid situation but looking at the positives I have learnt a lot and know what I need to do to move forward. I’d like to say a massive thanks to the team, my supporters and sponsors, without them I couldn’t be here, and also to Yamaha. I hope to be back again next year.”

Alvaro Diaz: P18 & P18
Biblion Motoxracing Yamaha WorldSSP300 Supported Team
“It was a really good weekend for me at Estoril. We had some technical issues which is not the best way to end the season, but overall I’ve developed a lot as a rider. Thank you to Yamaha and the team who have given me great support this year.”

Alberto Barozzi
Yamaha Motor Europe bLU cRU Racing Manager
“First of all, it was a great overall WorldSSP300 podium for bLU cRU rider Bahattin, who did an awesome job. Considering his young age and relatively low amount of experience compared to the main championship challengers, Bahattin improved throughout each weekend and never gave up. We are really proud of the other four fantastic bLU cRU boys as well – Unai, Ton, Alvaro and Alan. They have had a really good season, all of them followed our educational programme and applied it on and off the track. Seeing them grow has been our greatest satisfaction, and we’ve been able to help shape them into more complete riders. Everyone involved in our project has done a terrific job and what makes me proud is the dedication from the bLU cRU staff, teams, supporters and riders’ parents, who all come from different backgrounds, but all carried the same passion and goals. The compressed season is over, but we’ve shared a lot of memories that continue to make everyone involved happy. Thanks again to the bLU cRU riders for what they have done, I’m really proud and honoured and can’t wait for the future. See you back on track soon.”