With an unmatched combination of cars, stars and action, Autosport International will host the launch of the 2014 motorsport season at Birmingham’s NEC this weekend.

Europe’s largest motorsport show was attended by almost 80,000 people in 2013, and the line-up for the 2014 event on 11-12 January has been boosted with the addition of former World Rally Champion Petter Solberg and FIA World Touring Car Championship race winner Tom Chilton to Saturday’s line-up.

Starting 50th anniversary celebrations of Surtees’ 1964 Formula One World Championship, the British legends’ life in motorsport will be honoured with a collection of his race cars and bikes, including his title-winning Ferrari 158.

Every Formula One team will appear on the F1 Racing Grid, Jordan’s title-winner leads a dedicated BTCC display, while the Wales Rally GB feature includes the Subarus used by Colin McRae to win the rally in 1997, and Richard Burns to secure the 2001 World Rally Championship on home soil.

“With a line-up of guests led by the legendary John Surtees, cars from every level of motorsport, the sensational Live Action Arena, the latest supercars in the Performance Car Show and a wide variety of interactive elements, there really is something for every enthusiast at the NEC.”

A four-time winner of Wales Rally GB and the 2003 WRC Champion, the popular Solberg will appear at the show on Saturday morning, ahead of the 2014 FIA World Rallycross Championship.

“I’ve always enjoyed competing in the UK, and obviously I have special memories from my victories at Wales Rally GB, so I’m looking forward to catching up with the passionate fans at Autosport International,” the Norwegian said.

An array of new cars will be in the spotlight on the eve of the new season, including F1 race winner Robert Kubica’s RK M-Sport World Rally Team Ford Fiesta RS WRC for his maiden campaign in the FIA World Rally Championship.

The BTCC presence at Autosport International will include 2014 livery launches for race winner Rob Austin and series newcomer Simon Belcher, while Honda’s new Civic Tourer will be displayed throughout the show.

Representing a unique piece of motorsport history, Classic Team Lotus has restored a Formula One championship winner to return to the public eye for the first time in decades, while television broadcaster Motors TV is running a competition to find a commentator and host for its 2014 British GT Championship coverage.

Sky Sports commentator David Croft and the Gadget Show’s Pollyanna Woodward will host proceedings in the UK’s largest indoor racetrack, the 5,000-seat Live Action Arena, and the very best of the motoring world will also be on display, through the Performance Car Show.

Alongside special collections of supercars and the latest high-performance models from the likes of Ferrari, Aston Martin, Jaguar and McLaren, and an exclusive showing of the newly-announced WhatCar? 2014 Sports Car of the Year, the Porsche Boxster 2.7. The show will host the launch of the Lotus Elise S Cup R and Sin R1, and the UK debuts of the Abarth 595 50th Anniversary Edition, Vauxhall VXR8 GTS.

Autosport International tickets can be pre-purchased online, from £31 for adults and £20 for children, or at the door, from £33 for adults or £22 for children. For more information about the show, visit www.autosportinternational.com. 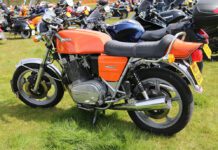