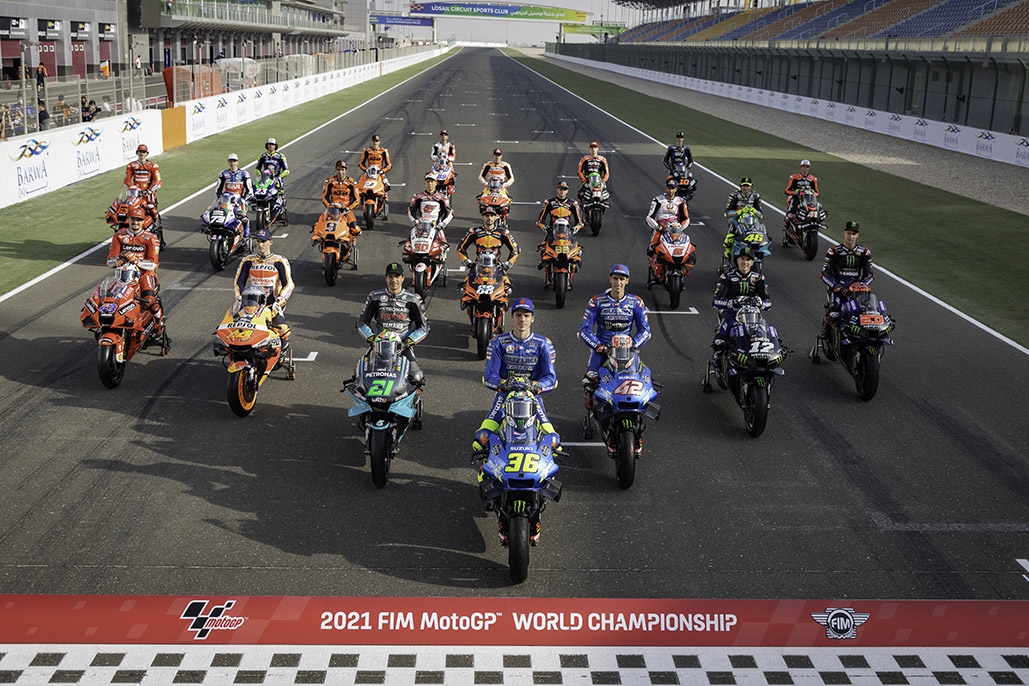 Starting from zero: the pre-event Press Conference pulls the pin on 2021.

Mir, Pol Espargaro, Miller, Quartararo, Rossi and Aleix Espargaro sit down to talk about the season ahead as the Barwa Grand Prix of Qatar begins.

Joan Mir: “So happy to be here again. Last year we did a really good season, a dream to achieve the Championship. We are here in Qatar, everyone starts from zero and it will be important to feel great here. The test was not bad but we have work to do. Looking forward to this season, we have a great challenge ahead of us defending the title and we’ll do as good as we can so let’s see.

“The engine is the same and the bike also. There’s not a big change on the bike, it will be really important to keep the consistency but improve the speed to win more races, this will be the main goal.”

The number 36 was also asked about the departure of former Suzuki Ecstar Team Manager Davide Brivio:

“I think Davide did a great job putting every piece in the correct place in this team. We showed that we are able to win. Mainly, Suzuki aren’t moving anybody and not trying to replace Davide. We don’t miss him and I hope he will have a lot of luck in F1.”

Pol Espargaro: “It was a difficult beginning to the season because we just had four days of testing. For the rookies it was even worse but also for the guys who changed bikes, it was not the best preseason. Anyways even with those four days, the final day I felt comfortable and I could do something interesting with race pace, at least to start to think about where to be on the race. On one lap we weren’t far from Jack Miller, we know he is very fast, also Fabio and Maverick but still I think we have a lot to learn and it will be a little bit difficult, but we will enjoy the first race of the season.

“In the past when I heard someone saying this bike is very difficult, I was always thinking the same thing, for me, one bike with one manufacturer can be very difficult and for one rider with a riding style better to this one it can be easier. So, for me, the Honda for sure is not the easiest but I don’t agree it is the most difficult bike on the grid. You just need to match the riding style of the bike and it feels like I did that a little in the test. I don’t know how much I matched because it is difficult to evaluate after four days how much I’m connected to the bike. I would take out this idea the bike is difficult, and I want to start to be positive, to be proactive and try to make things happen. Starting here in Qatar it is not the best place for Honda or even me, but the test was quite positive, but we are going to go for it and see what we can do in the first races even if we are still rookies with this bike.”

Jack Miller: “I feel ready as I’ll be, we didn’t get that big of a break, I went back to Australia for a bit but not as much as I’d like. The pre-season went good, I didn’t have a massive move it was just one garage over, I already knew a lot of the guys so we got on straight away. The times were good in testing but we can’t look into it too much, the conditions were perfect. We’ll start again from zero here, it will be a bit different with Dunlop rubber on the track from Moto2 and Moto3 so we’ll come in with an open mind.

“For sure I think there is a lot more hype than if I topped the times last year with Pramac. For sure there is extra pressure there, we haven’t had much time to feel it, everything has been relatively good so far, it hasn’t been difficult so we’ll see when it gets difficult how the pressure sinks in but apart from that, everything feels a step up. Having more stuff is nice to have, you don’t feel the full benefit of it coming to a test with four days at the same track. Just in the first couple of exits I noticed, with the people around me, we were able to adapt and overcome other problems that took more time in the past.”

Fabio Quartararo: “I think that last year and the end of the season was difficult, but I think I have learned many things that can bring me a lot of experience for the future and this year. It feels like it has been high and low, but I feel ready for 2021 and I think that is the most important thing.

“Your first year you think about winning but your goals are to fight for the top five, but when you are with the factory your goals cannot be to fight for the top five, it’s clear that everyone here wants to fight for the Championship. Last year I had a factory bike, but you see a little bit more people in the team and more responsibility to develop the bike, but in general I’m feeling good. The test was great, we tested many things and everything went well. More than feeling pressure now I’m just super excited to start the weekend!”

Valentino Rossi: “The atmosphere on Thursday of the first race is always the same, like the first day of school. It’s always exciting, also for the pictures together on the grid, you have the feeling that in some hours we start. I changed team after a long, long time, but I feel good. The atmosphere is good and the test was not so bad, now we have to see in a real race weekend.

“In the factory team but also in the Petronas team everyone gives the maximum, so you have the pressure. The difference is the amount of people around the bike, but for me the atmosphere was also good in the factory team, it’s not a big change. I’m very happy to have Franco as my teammate because we’re good friends, we stay a lot of time together in Tavullia for training but also free time, and he is one of the best riders in MotoGP at the moment like he demonstrated last year. So for me, it’s good, it’s great motivation to fight with him.”

Aleix Espargaro: “I hope it is like this, but you never know, a test is a test. Races are completely different, and after Moto2 and Moto3 the track will change. We will not start from zero but somewhere we will have to change some things. The test was good, the RS-GP 21 looks sincerely promising, but we have to race and compare with the others. I’m sure everyone will improve for the race. It’s not going to be easy but I’m very motivated and feel I have the chance to fight with the best and it gives me positive energy and I can’t wait for FP1.

“I’m very happy. In these last years we’re making steps to get closer to the top bikes and Aprilia have made an important step which will be very helpful for the future. And Dovizioso, apart from being a talented and a fast rider, he can be a very good test rider. He did a great job with the Ducati. The last seasons he was winning races and fighting for the title so he will be able to give us good feedback and help us a lot. I can’t wait for him to try the bike in Jerez and to see his reaction and how he likes the bike and sees the weak points, because I will be six years with this bike, and he will be fresh and new and give a new point of view.”

Qatar hosts 2021 class photos
The MotoGP™, Moto2™ and Moto3™ fields all headed to the grid at Losail to take a few class photos ahead of the first track action of the year.

Ahead of the 2021 FIM MotoGP™ World Championship getting underway on Friday in the Barwa Grand Prix of Qatar, Race Director Mike Webb explained a few changes to the way track limit infringements are judged.

A new system of sensors is now in place, increasing the accuracy of judgments and helping to create a level playing field for every infringement and/or decision.

Mike Webb: “Track limit regulations are staying the same but what we’ve been working on all last year is an updated system to detect track limits. Dorna and timekeeping have been working on this last year, we’ve got a new system that has pressure senses on the track outside the kerbs, so we can detect very accurately when a rider has gone out of track limits. It’s a much more accurate system.

“So the rule stays the same but because the system is actuated a little differently to the cameras we used before, it means for the riders that if they go out of track limits, there’s immediately a signal. In the past we had to look at a camera image and make a judgement. Now it’s just in or out; it’s very accurate. The difference for the riders or protocol is that now, one wheel out means out. In the past it was two wheels in the green, and is this two or one, how far out… no more of that judgment. Out is out and it doesn’t matter if it’s one wheel or two. It’s more accurate and it means it’s more fair for every rider, with a very clear view of who is in or who is out. The rule is the same, but the judgment is much more precise.”

MXGP Set for Another Thrilling Grand Prix in Pietramurata