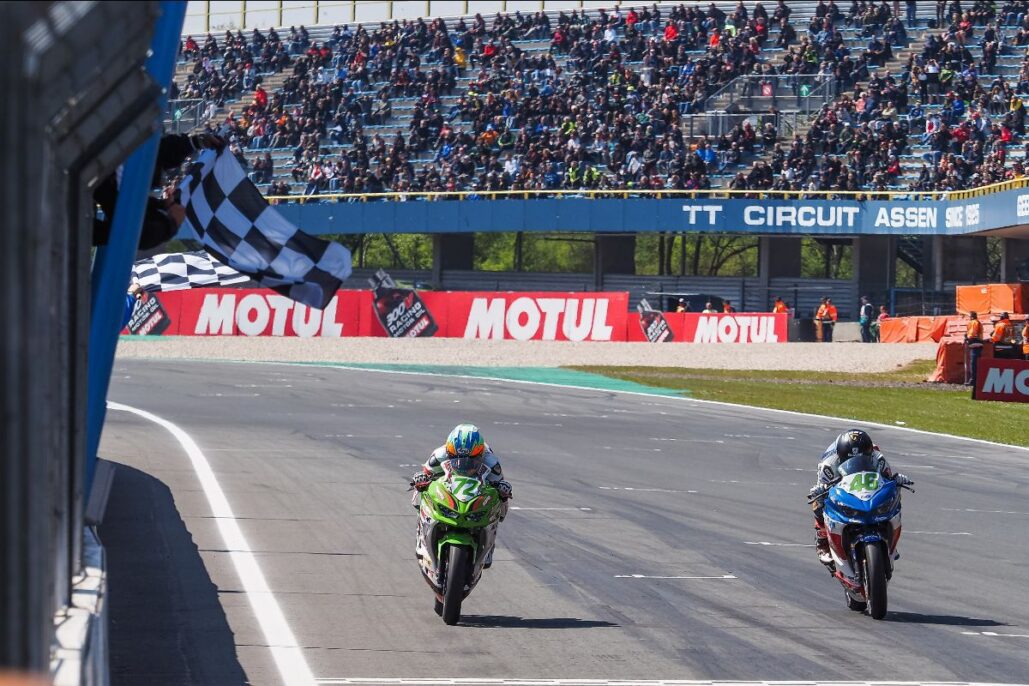 Steeman secured the victory on the last lap after a 14-lap battle with Di Sora.

Starting from pole position, Victor Steeman (MTM Kawasaki) claimed his second win in WorldSSP300, the first one at his home round, with Samuel Di Sora (Leader Team Flembbo) in second. The pair managed to escape at the front, as they battled throughout the 14-lap race. Only 0.038s separated the two on the finish line with Steeman taking the advantage when the Frenchman ran wide at Turn 9 of the last lap.

Steeman commented his race: “The race was good. I tried to go away but Di Sora stayed behind me. I had the feeling that I had a little bit more pace, especially first three sectors, maybe in the last one Di Sora was a bit better. I tried to always be in front, so the gap was getting bigger and bigger. In the last laps, I saw he made some mistakes in some corner where I had different lines. My strategy was to pass him in the last left corner, the fast now, because I am normally very strong there. In the end I didn’t need to, and it feels amazing to take the win in Assen.”

Di Sora explained: “It was a very fast race with Victor. He was leading for most of the race, and we were helping each other to escape at the front. The strategy was to let him pass before the final sector, but I went a bit too wide. I lost too much time. He closed the door very well at the last chicane. P2 is great in the end. Aragon was very tough for us so being on the front row on the grid and finishing in second fighting for the win with such a gap, we’re very happy about it.”

8.8s behind the leading group, it was Mirko Gennai (BrCorse Team) in third after an amazing battle between eight riders. The Italian rider claimed his first ever WorldSSP300 podium and said: “It was a difficult race. I had a lot of riders in front of me. I tried to overtake many of them and in the last lap, I overtook the last rider of my group to get third place. It’s my first podium in WorldSSP300 and I’m very excited. Tomorrow, I want to fight for another podium to get more points for the Championship.”