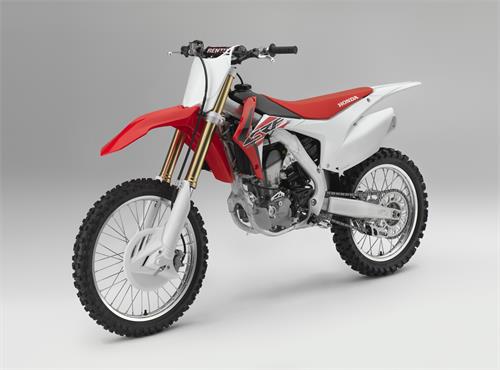 In just five weeks time, the 2015 edition of Europe’s largest dedicated off-road exhibition will be open to the public and the latest news is that one lucky Show fan will win a stunning Honda CRF250R worth over £6,600.

This is a serious bit of kit for the MX2 competitor, as the uprated 2016 model enjoys a substantial top-end power boost from a newly-developed HRC cylinder head, piston and con-rod, with stronger bottom-end torque without sacrificing mid-range performance. The new crosser is also equipped with Showa SFF-TAC-Air forks, which have been further improved to reduce friction, plus Honda’s programmable engine mapping system which allows the rider to select one of three pre-set configurations to suit differing track conditions.

The CRF will be situated on the Classic Dirt Bike magazine stand in hall three, on display throughout the four-day duration of the International Dirt Bike Show. Visitors can enter the competition at the Show itself or online at www.dirtbikeshow.co.uk

Money-saving advance tickets are now on sale offering adult admission from just £8 for the opening day, Thursday the 29th of October, or £13 for Friday through to Sunday. Those aged over 60, or between 11 and 15 can visit the Show on any day for just £8 with an advance ticket, and children aged 10 and under go free. For every ten adult tickets bought together, the 11th is free, so why not get a group of friends, family and club members together and save even more? There are no booking fees and parking is free and plentiful.

To buy advance tickets and find out more about what’s going on at the Show, visit www.dirtbikeshow.co.uk where the Show App can also be downloaded, Facebook liked and Twitter followed.