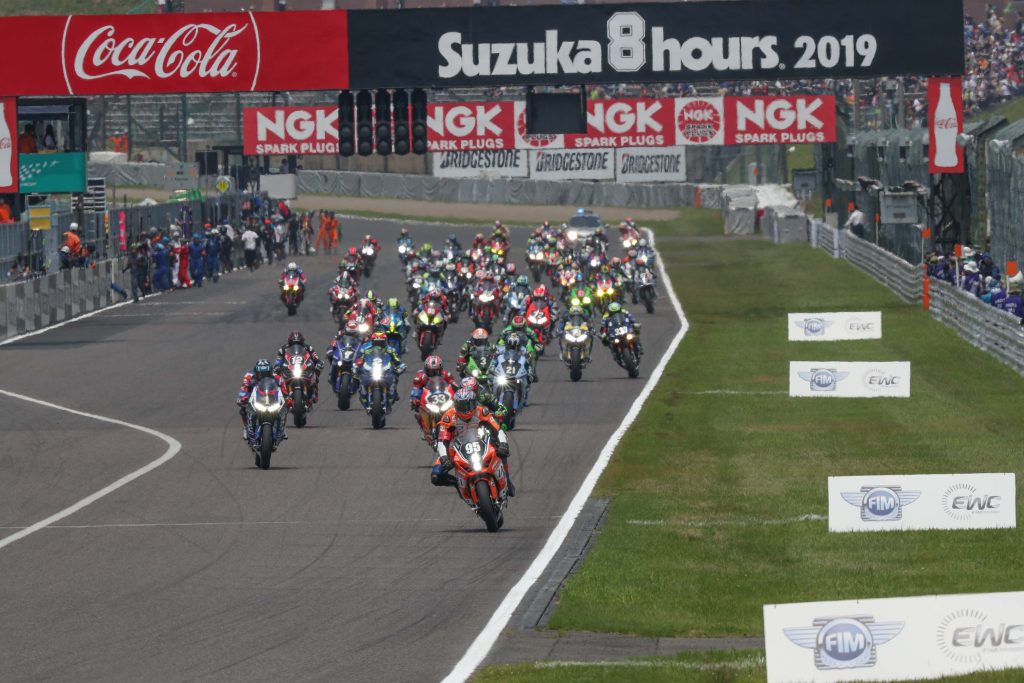 The all-action FIM Endurance World Championship is back on track next week with the long-awaited return of a truly iconic event, the 43rd Coca-Cola Suzuka 8 Hours Endurance Race.

Signalling the start of part two of the 2022 EWC season, the Suzuka 8 Hours has been absent from the calendar since it last took place in 2019 due to the global health pandemic. Its return from 4-7 August, therefore, has been eagerly anticipated by fans and competitors alike, with a number of EWC regulars – plus some of Japan’s best riders and their teams – preparing to take on the challenge of the ultra-exciting Suzuka Circuit layout.

As well as the unique figure-of-eight track design and blend of fast-, medium- and low-speed corners, ambient temperatures could top 35 degrees centigrade with humidity at 40 per cent, making for a demanding week of EWC competition.

Japan’s EWC round is the only race on this year’s calendar not run for 24 hours. While the twice-around-the-clock races run in 2022 have delivered non-stop action with riders pushing from start to finish in their pursuit of glory, the Suzuka 8 Hours will be even more intense.

Taking the Le Mans-style running start at 11h30 local time (04h30 CET) on Sunday 7 August, riders race through the heat of the day, through sunset and into early evening with the chequered flag scheduled to be waved to the winner of this prestigious race at 19h30.

Several riders and teams yet to showcase their respective skills and capabilities in this season’s EWC will join the chase for Suzuka success, while there has also been a change to the Yoshimura SERT Motul line-up.


The Suzuki-powered squad is the defending EWC champion and also heads the provisional standings after two rounds. However, for its home event it has handed Gregg Black the non-participating role of Team Captain and entered top Japanese rider Kazuki Watanabe alongside Sylvain Guintoli and Xavier Siméon.

Kawasaki Racing Team Suzuka 8H has retained Jonathan Rea and Leon Haslam, part of line-up that won the last Suzuka 8 Hours to take place on 28 July 2019, and added three-time Suzuka winner Alex Lowes, who finished second three years ago, for an all-British attack. Haslam has also won the event three times, while Rea has two Suzuka victories to his name.

Spaniard Iker Lecuona, who rides for Honda in the FIM Superbike World Championship and previously raced in MotoGP, will represent Team HRC, which also counts on the riding strengths of Tetsuta Nagashima and Takumi Takahashi, who took the first of his three Suzuka 8 Hours victories in 2010.

Honda’s regular EWC team, F.C.C. TSR Honda France, has finished on the podium twice this season thanks to the efforts of riders Mike De Meglio, Josh Hook and Gino Rea.

YART – Yamaha Official Team EWC counts on additional support from Yamalube for Suzuka but its trio of Niccolò Canepa, Marvin Fritz and Karel Hanika are unchanged as the Austrian outfit bids for its first EWC win of the season with Hanika aiming to extend his pole position sequence to three events.

BMW Motorrad World Endurance Team starts the Suzuka 8 Hours on the back of winning the 24H SPA EWC Motos last month with Jérémy Guarnoni, Illya Mykhalchyk and Markus Reiterberger. While Guarnoni and Reiterberger have Suzuka experience, Ukrainian rider Mykhalchyk has yet to sample the challenging track after the Belgium team skipped the first event test earlier this month.

SUZUKA 8 HOURS: A RACE AND FORMAT WITH A DIFFERENCE

As with all EWC events, two qualifying sessions are run in addition to testing, free practice and night practice. However, the Suzuka 8 Hours also features the Top 10 Trial shootout to decide the first 10 places on the starting grid.

Following Second Qualifying on Friday, the leading 10 teams go forward into the Top 10 Trial on Saturday afternoon. Two riders per team take part with each rider getting one lap to set their time. The lap times of each rider are then combined to complete the final starting grid for Sunday. The 5-4-3-2-1 qualifying points are awarded after the Top 10 trial rather than after the completion of Second Qualifying, which is the case at other EWC events.

Suzuka Circuit in 100 words: Operated by Honda-owned Mobilityland, Suzuka features a unique figure-of-eight layout and presents a considerable challenge for riders thanks to its wide variety of corners. Opened initially as a test track for the Japanese motor giant in 1962, the venue hosted the first edition of the famous Suzuka 8 Hours motorbike race in 1978, nine years before staging its first Japanese Formula One Grand Prix. The Suzuka 8 Hours has been a popular feature on the FIM EWC calendar and a key fixture on the international calendar since with leading grand prix motorcycle racers taking part – and winning – over the years.

SUZUKA 8 HOURS FAST FACTS
*The Suzuka 8 Hours is back on the FIM EWC calendar in 2022 having not taken place since 2019 due to the global health crisis.
*Americans Mike Baldwin and Wes Cooley won the inaugural Suzuka 8 Hours on 30 July 1978 on a Yoshimura Racing Suzuki.
*Japanese fans had to wait until 1982 for the first home victory when Shigeo Iijima and Shinji Hagiwara won for Honda.
*Although it was billed as an eight-hour race, the onset of a typhoon that year meant there were only six hours of racing.
*Other winners of the Suzuka 8 Hours include Wayne Rainey (1988), Eddie Lawson (1990) Mick Doohan (1991) and Valentino Rossi (2001).

WHAT’S NEW FOR EWC IN 2022?
A summary of some of the 2022 FIM Endurance World Championship changes appears below:

*Addition of 24H SPA EWC Motos to the calendar means there will be three 24-hour races in the same FIM Endurance World Championship season
*Dunlop Superstock Trophy recognises and rewards Superstock category competitors in the three 24-hour races as part of Dunlop’s single-supplier agreement
*Qualifying results are based on the average time of the fastest two riders (the results of the fourth rider are not taken into account)
*All riders per team must qualify within 108 per cent of the fastest team in each category
*Stäubli is the single supplier of the FIM homologated fuel quick-fill system for the FIM Endurance World Championship and World Cup from 2022 (transition year) to 2031. Although its use is not mandatory in 2022, the system is available for sale or rent to all the teams wishing to equip themselves and prepare for the mandatory use of the FIM homologated fuel quick-fill system from 2023

THE BIG NUMBER: 1106
When the 43rd Coca-Cola Suzuka 8 Hours Endurance Race gets underway on 7 August, it will have been 1106 days since the event last took place, such has been the impact caused by the global health pandemic.

Karel Hanika, Czech Republic (YART Yamaha Official Team EWC, Yamaha YZF-R1)
“It was nice to ride again at Suzuka [in the test] after four years. I had to re-learn the track as it was the first time I had ridden the Yamaha R1 at the circuit, so it was important to work with my team-mates. Our main focus was searching for the best tyres for different parts of the race and qualifying. This went well, and we found some good solutions. We still have some work to do with the electronics, but the suspension was excellent. The team did a great job, and we improved session by session. We are ready to fight with the other factories and give it our all.”

Josh Hook, Australia (F.C.C. TSR Honda France, Honda CBR 1000RR-R)
“This is one of my favourite countries and tracks on the calendar of the EWC and it’s very good to be back. We’ve missed riding at Suzuka a lot, it’s an amazing layout and to be here this year is great. The test was average, so to speak, we were expecting to be a lot more competitive than we were so we have a lot of work to do but we are getting there slowly and that’s the main thing. We used the two test days wisely to try to develop the bike as much as possible to give ourselves a good package for the race. Working on race set-up has been our target, to be fast but also consistent on the tyres in the hot conditions. Overall, we’re feeling good and the bike seems good. We just need to keep working.”

Jonathan Rea, United Kingdom (Kawasaki Racing Team Suzuka 8H, Kawasaki ZX-10R)
“It is always nice to be back in Japan and ride the Ninja ZX-10RR in endurance format. It is very different from the WorldSBK bike, especially in electronics, fuel mapping strategy and tyres. The first day [of testing] was a bit of a learning process to get back up to speed. Step-by-step I felt better and better. Every run we were able to do I was going faster, so we will keep the link towards [the] race weekend. I am looking forward to see all the fans and really absorb the race atmosphere. It is one of the biggest challenges of the season. I am excited about it, especially after this positive test.”

Markus Reiterberger, Germany (BMW Motorrad World Endurance Team, BMW M1000RR)
“I’ve already been to Suzuka twice with the Penz13 team, once for the test and once for the race. The track is breathtaking but very difficult to learn. Jérémy [Guarnoni] knows it already, Illya [Mykhalchyk] still has to learn it. And I certainly will need some time, too, to get in swing there again. I am pretty confident. First, we need to find a good set-up for the bike and then it is about understanding how the overall package of bike, tyres and conditions works best. The heat will for sure be a challenge. According to the forecast, we can expect 32 degrees Celsius and a humidity between 20 and 40 per cent. That sounds like that what we are used to. But if we get the typical Suzuka weather with 40 degrees and very high humidity, then it will be of course very difficult. It will be a challenge.”

Kazuki Watanabe, Japan (Yoshimura SERT Motul, Suzuki GSX-R1000R)
“Before the two days of testing [in early July] the weather forecast said it would be impossible to ride because the rain would be too strong but finally the first day dried up and the second day was dry completely, the temperature also went up like [it does for] the Suzuka 8 Hours. For me it was a very good test and every rider had important information for the team. I am looking forward to the race week because there will be a lot of fans, [but] here is still work to do to improve the bike to win.”