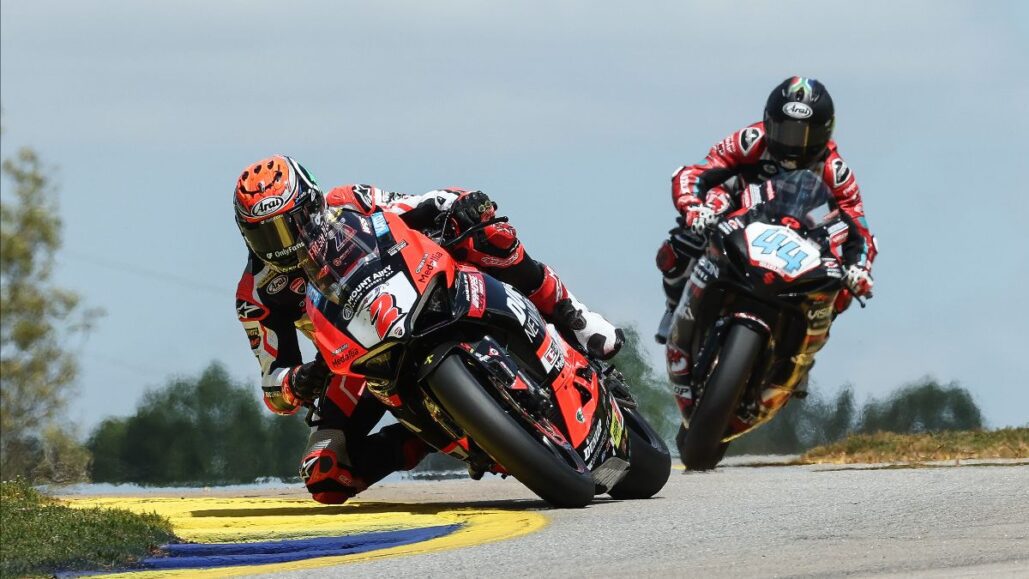 Eight years ago, Josh Hayes drove out of VIRginia International Raceway with two MotoAmerica Superbike wins in his pocket, the 51st and 52nd AMA Superbike wins in a career in which he amassed 61 victories in the class. It was also MotoAmerica’s debut weekend at VIR in 2015 and Hayes was a fitting winner. This weekend, Hayes rolls back into VIR hopeful of turning back the clock and taking victory again, this time in the MotoAmerica Supersport class.

Although we can’t call this a comeback because Hayes has yet to actually retire (his last race was in the Daytona 200 in March of this year where he finished fourth), it’s a comeback of sorts in that Hayes win record at VIR across all classes is 13, with four of those coming in the class he will compete in this coming weekend – Supersport.

And to put a nice little bow on the Hayes/VIR story, the 3.27-mile racetrack located on the Virginia/North Carolina border is also the site of Hayes last career Superbike win – May 12, 2017.

Ironically, the man who stands tallest in Hayes quest for win number 14 at VIR is his former Yamaha Superbike teammate Josh Herrin, the Warhorse HSBK Racing Ducati NYC rider who won the first two rounds of the Supersport Championship at Road Atlanta a few weeks ago.

Supersport – All Herrin
With two rounds of the MotoAmerica Supersport Championship in the books (the Daytona 200 was a non-points-paying race), Herrin is perfect with two wins on his Ducati Panigale V2 and a 10-point lead in the championship over Vision Wheel M4 ECSTAR Suzuki’s Sam Lochoff.

Lochoff finished second both times out at Road Atlanta, an impressive start considering he was on an all-new bike – a Suzuki GSX-R750 – without much testing time. The team has, however, been on the bike since Road Atlanta and that could end up paying dividends at VIR. After all, Lochoff was within striking distance for the majority of the two races, finishing 3.2 and 4.9 seconds behind in the two races, respectively.

Landers Racing’s Rocco Landers comes to VIR third in the championship with fourth- and third-place finishes at Road Atlanta. Landers is 11 points behind Lochoff, and six points clear of N2 Racing/BobbleHeadMoto’s Kevin Olmedo and Max Angles Racing’s Max Angles with those two tied for fifth in the title chase.

So, Herrin is perfect thus far in 2022, but he has plenty of hungry youngsters nipping at his heels. Oh, and you may want to keep at least one eye on Hayes and his Squid Hunter Yamaha YZF-R6.

With the Yuasa Stock 1000 class only racing once at Road Atlanta, the championship point standings are the same as the finishing positions. At VIR, however, the 44 entrants will grid up twice over the course of the weekend.

Twins Cup – Barry Leads ‘Em In
After three rounds of the MotoAmerica Twins Cup Series the top two in the championship are separated by just three points. Those two are Veloce Racing’s Jody Barry and Robem Engineering’s Teagg Hobbs. The difference between the duo comes down to the fact that Barry has won a race and Hobbs has not. And that race was the lone Twins Cup race at Road Atlanta with Barry beating Hobbs by a miniscule .073 of a second.

In the championship chase, Daytona race one winner Blake Davis is third going into the VIR round, 17 points behind Hobbs and 20 behind Barry. Davis and his N2 Racing/BobbleHeadMoto Yamaha YZF-R7 finished fifth at Road Atlanta.

Rodio Racing/Warhorse HSBK Racing’s Anthony Mazziotto and North East Cycle Outlet Racing/Trackday Winner’s Jackson Blackmon round out the top five in the championship as the series heads to VIR for a pair of Twins Cup races.

Van and his SportbikeTrackGear.com Kawasaki Ninja 400 were the most consistent in Georgia. The youngster from Michigan was second in race one on Saturday and came back on Sunday to win his first-ever MotoAmerica race. Wyman, meanwhile, and his Alpha Omega Ninja won Saturday’s race but slipped to fifth on Sunday.

Altus Motorsports’ Kayla Yaakov is third in the championship, 16 points behind Van, after her fourth- and third-place finishes at Road Atlanta. Yaakov was stripped of her first career MotoAmerica win on Sunday at Road Atlanta and demoted to third after passing under a caution flag on the final lap.

Last year, CJ Lukas won all three of the BTR races in the debut of the series, but Lukas isn’t returning and that makes this year a wide-open affair.

Minnesota’s Trisha Dahl, however, is returning for 2022 and she was the runner-up in last year’s points chase. Dahl was ultra-consistent with three third-place finishes on the year.

Last year’s third-highest point scorer, Becky Goebel is also a non-returner, but both Kayla Theisler and Alyssa Bridges are coming back for more. Those two finished fourth and fifth, respectively, in the title chase.

The Royal Enfield Build. Train. Race. series will consist of one race at VIR on Sunday at 12:45 p.m.

Sean Dylan Kelly and Richie Escalate also did a little win splitting last year in the Supersport class. Kelly won race one and finished second in race two while Escalante finished fourth in race one and won race two.

In Twins Cup action it was Teagg Hobbs winning race one with Jody Barry taking victory in race two. Jackson Blackmon was third in both races.

Benjamin Gloddy and Cody Wyman were the big winners in the SportbikeTrackGear.com Junior Cup. Tyler Scott, who would go on to win the championship, had an off day and was third and fourth in the two races.