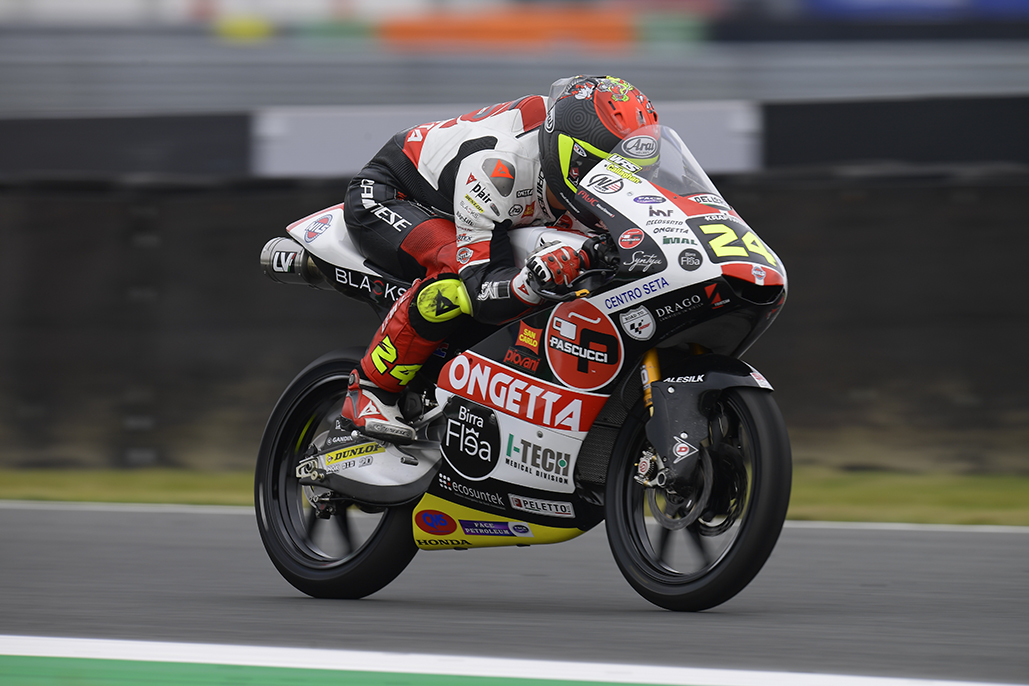 The Japanese rider and the South African head the timesheets on Day 1, with Foggia completing the top three

Tatsuki Suzuki (SIC58 Squadra Corse) begins the Motul TT Assen as the fastest man in Moto3™, the Japanese rider taking over at the top in FP2 after an impressive lap just three and a bit tenths outside the all-time lap record. Rain then put paid to the chance to improve, with Darryn Binder (Petronas Sprinta Racing) ending the day just 0.089 off Suzuki and Dennis Foggia’s (Leopard Racing) FP1 best putting him in third overall.

FP1
Foggia struck late and held off an even later charge from Binder to go fastest in the morning, with just 0.070 splitting the two and then a little clear air back to Andrea Migno (Rivacold Snipers Team) in third, the latter despite an off. Romano Fenati (Sterilgarda Max Racing Team) was fourth quickest, with Gabriel Rodrigo (Indonesian Racing Gresini Moto3) locking out the top five despite an early crash for the Argentinean.

Lorenzo Fellon (SIC58 Squadra Corse) and Stefano Nepa (BOE Owlride) also crashed, before Jaume Masia (Red Bull KTM Ajo) had the final fall of the session. The Spaniard was flicked skywards and headed to the Medical Centre; but rider ok and declared fit.

FP2
Suzuki was inside Foggia’s FP1 best early on, and the Japanese rider was still on a roll before suddenly highsiding out, rider ok. The promised up and down weather of Assen had struck, and no one was then able to improve – leaving Suzuki top and Binder once again incredibly close to it in the afternoon.

Foggia was third but slower than his FP1 best, with Migno slotting into fourth after a day of two good halves from the Italian. Jaume Masia dug deep to bounce back from his huge crash in FP1 to complete the top five.

Championship leader Pedro Acosta (Red Bull KTM Ajo) slid out at Turn 1 with little drama, rider ok, and the number 37 also had some extremely close company from Deniz Öncü (Red Bull KTM Tech3) as the Turk got close to some contact when following him but no harm done.

Combined Timesheets
Suzuki and Binder lead the way thanks to their FP2 bests, with Foggia in third from FP1. The Leopard Racing rider had some breathing space on the timesheets but heads a group of riders who all went faster in the morning: Migno, Fenati, Rodrigo, Niccolo Antonelli (Avintia Esponsorama Moto3) and Acosta. Masia slots into ninth, the number 5 going faster in the afternoon, with John McPhee (Petronas Sprinta Racing) completing the top ten thanks to his FP1 best.