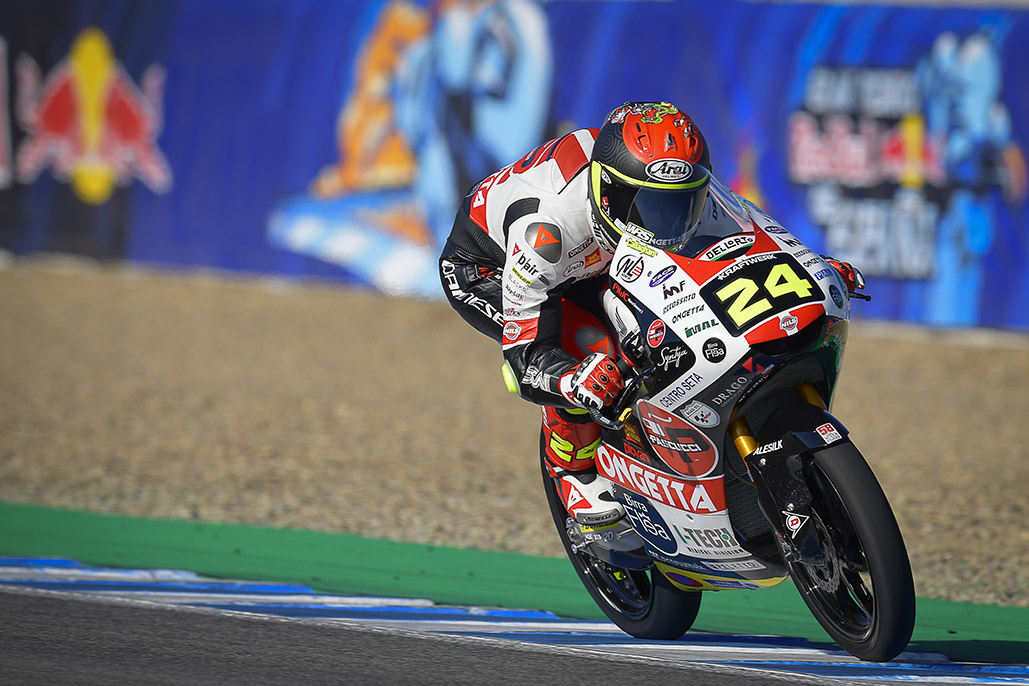 Three’s a magic number for the Japanese rider as he makes it three poles in a row at the venue, ahead of Alcoba and Migno.

On a sunny but cool day at Jerez, Q1 got qualifying going and the first big question since his pitlane start in Doha was asked of Championship leader Pedro Acosta (Red Bull KTM Ajo) as the Spaniard found himself looking to move through. Seemingly immune to the pressure, however, the number 37 topped the session with his last flying lap and headed for Q2 ahead of fellow rookie Izan Guevara (Solunion GASGAS Aspar Team), Carlos Tatay (Avintia Esponsorama Moto3) and eventual front row starter Alcoba to fight for the top 18 positions on the grid.

Once Q2 was underway, it was 2020 Spanish and Andalucia GP polesitter Suzuki on top with exactly two tenths in hand over Migno after the first runs for most, but there was one bit of drama not long coming for Darryn Binder (Petronas Sprinta Racing). The South African had a mammoth highside at Turn 7 – rider perfectly ok – but lost his chance to improve further, stuck watching the timesheets to see how far his 1:46.288 for a provisional P4 would get shuffled down the order.

As it turned out, it wouldn’t be by that much. The field headed back out with only a couple of minutes remaining on the clock but only a handful of riders were able to make it count, with many missing the cut once again. The first improvers were Ayumu Sasaki (Red Bull KTM Tech3) and teammate Deniz Öncu as they moved into the top ten, but as the clock ticked down there was a dearth of red sectors and only a few more riders to cross the line. Gabriel Rodrigo (Indonesian Racing Gresini Moto3) was one of the few improvers as he shot up into third for a provisional front row, with Romano Fenati (Sterilgarda Max Racing Team) and Alcoba looking like the only two remaining threats on the top – in that order on the road. Could they make an assault for pole?

Fenati was first over the line and he did enough to shoot up into fourth at least, but it was short-lived as Alcoba blasted over the line just behind him. From Q1, the Spaniard took second and with that just pushes teammate Rodrigo onto Row 2, to start just ahead of Fenati.

And so Suzuki remained unthreatened at the front and the Japanese rider takes a third straight pole at the Circuito de Jerez-Angel Nieto, ahead of Alcoba in second and another impressive Saturday from Migno as the veteran Italian completes the front row. Rodrigo is shuffled down to head Row 2, which is completed by Fenati and Petronas Sprinta Racing’s John McPhee.

Binder, despite his earlier crash, was seventh quickest and only lost a few places to his forced exile on the sidelines, and he’s joined on Row 3 by Sasaki and 2019 Jerez winner Niccolo Antonelli (Avintia Esponsorama Moto3). Öncü completes the top ten ahead of the last of the late lunges from Q1 graduate Izan Guevara, who pipped Filip Salaç (Rivacold Snipers Team).

That means that Acosta is forced to settle for P13 for his first Moto3™ race on home turf, with veteran teammate Jaume Masia (Red Bull KTM Ajo) also facing a fight back from 15th. Will that be a hurdle on race day or does the freight train forgive more easily once the fight’s underway? Find out on Sunday as the lights go out for the Moto3™ race at 11:00 (GMT +2).

Tatsuki Suzuki: “During the winter I got Covid just one week before the winter test in Qatar so I missed the three days of testing, and that’s why I wasn’t quite competitive form the beginning of the season. I was struggling at the end of races on a used tyre, so this weekend me and the team worked a lot on the used tyre, normally we use two or three new tyres in FP1 and 2 but we used only two. As you see on Day 1 I wasn’t fastest but we knew with a new tyre we were quite competitive, so this afternoon in Q2 I really focused for the first flying lap, cause you know it can be a big mess In Moto3, especially in the last moments, so we decided to do good a lap as soon as possible. Unfortunately I took the flag and couldn’t improve on the last lap but let’s say I was a bit lucky and it’s nice to be here on pole position again this year.”