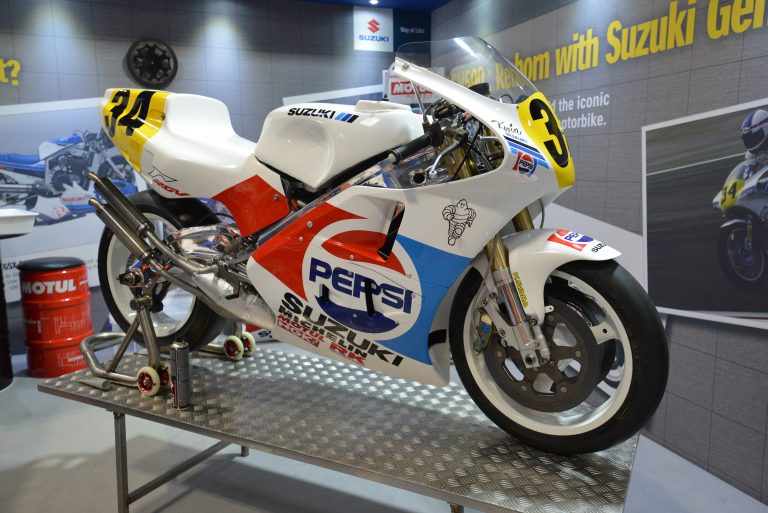 The iconic Grand Prix machine was completely stripped, before being carefully and meticulously restored by Team Classic Suzuki chief mechanic Nathan Colombi on the Suzuki stand during the course of the show.

The restoration was supported by Suzuki’s Vintage Parts Programme, which has provided some of the show’s headline entertainment in recent years, with the build of a brand new TL1000S from genuine parts, the restoration of an original GSX-R750F, and the build of Team Classic Suzuki’s Katana, which competed in the European Classic Endurance series in 2017.

The award was handed out based solely on visitor feedback.

Suzuki GB’s aftersales marketing co-ordinator, Tim Davies, said, “When we’re thinking of ideas for each show, we just do what we know we’d like to see. We’re enthusiasts, ultimately, the same as everyone that visits Motorcycle Live, and last year we were just as excited to see the full restoration of such an iconic race bike as everyone else. However, there are lots of great features at Motorcycle Live each year, so it is really special to know that what we did was appreciated, and we’re very grateful for the title.”

Suzuki’s new SV650X was on display in the UK for the first time at the event, where the Japanese brand displayed its full 2018 model range, as well as Michael Dunlop’s Isle of Man, Senior TT-winning GSX-R1000.

Motorcycle Live is biggest motorcycle show in the UK, and takes place for nine days annually in November.

For information on Suzuki’s Vintage Parts Programme or to view its 2018 model lineup, visit bikes.suzuki.co.uk