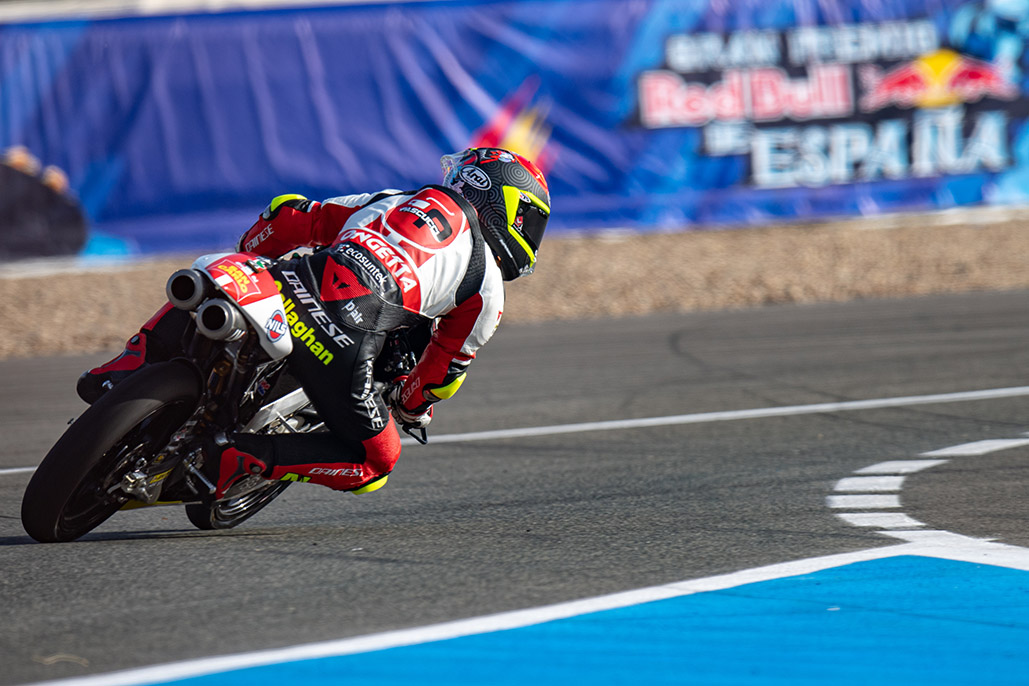 Four months later, the Japanese rider once again gears up to begin the Moto3™ race from pole.

SIC58 Squadra Corse’s Tatsuki Suzuki secured back-to-back pole positions in the Moto3™ class after obliterating the outright lap record at the Gran Premio Red Bull de España on Saturday. With a minute remaining and with clear track ahead, the Japanese star put his head down and grabbed his second pole of 2020, four months after his first at the Grand Prix of Qatar. Andrea Migno (Sky Racing Team VR46) put in a last minute dash to take second, with John McPhee (Petronas Sprinta Racing) taking third after he tagged on to Suzuki on the polesitter’s last lap. The Scot has had pace all weekend, however.

The scorching sun in Jerez didn’t deter the Moto3™ field from lighting up the timesheets, and in Q1 it was Romano Fenati (Sterilgarda Max Racing Team) heading the field for Husqvarna, the Italian moving through to Q2 alongside Niccolo Antonelli (SIC58 Squadra Corse), Tony Arbolino (Rivacold Snipers Team) and Ai Ogura (Honda Team Asia). Then it was time to reset again and get ready to fight it out for the first pole since March. Ultimately that would see Suzuki break the lap record, but the timesheets tight behind the Japanese rider – just as we like it.

Fronting Row 2 of the grid is Red Bull KTM Ajo’s Raul Fernandez who, despite seemingly complaining of front-end feel halfway through Q2, found some pace to go fourth and back up his impressive form in the weekend so far. He’ll be joined on the second row by Migno’s Sky Racing Team VR46 teammate Celestino Vietti and Kömmerling Gresini Moto3 rookie Jeremy Alcoba, who put in a sensational performance to turn the tables on experienced teammate Gabriel Rodrigo, who topped the timesheets on Friday.

Moto3™ World Championship leader Albert Arenas (Gaviota Aspar Team Moto3) will try to defend his five point lead from seventh on the grid, with veteran Romano Fenati making good on his Q1 promise and taking P8. Free Practice pacesetter Gabriel Rodrigo will start ninth but could be one to watch after his speed on Friday, with Tony Arbolino completing the top ten after an improved session for the Italian after he had been forced to head through Q1.

Valencia 2019 winner Sergio Garcia (Estrella Galicia 0,0), meanwhile, could be one to watch. He starts last after a difficult session and having mis-timed his second run, and he’ll be trying to slice through the pack. No one has won from pole in Moto3™ at Jerez, but someone has won from the back as Brad Binder destroyed the field in 2016!

All that remains now is to race, with Moto3™ sure to put on an incredible show at the Circuito de Jerez-Angel Nieto. Tune in from 11:00 (GMT +2) for their return to competition.

Tatsuki Suzuki: “I was struggling a little bit from FP1 because after the crash in the test I lost a bit of confidence on my bike and I was struggling a bit with my riding. But after, I started to work hard with my team and this morning we made a small step on the bike and I got a good feeling. So in Q2, from the first lap I did a 45.7 and I was quite happy about that. But I wasn’t t sure if it was enough for pole. So I tried to improve more at the end, and I went three tenths faster so I was quite happy!”