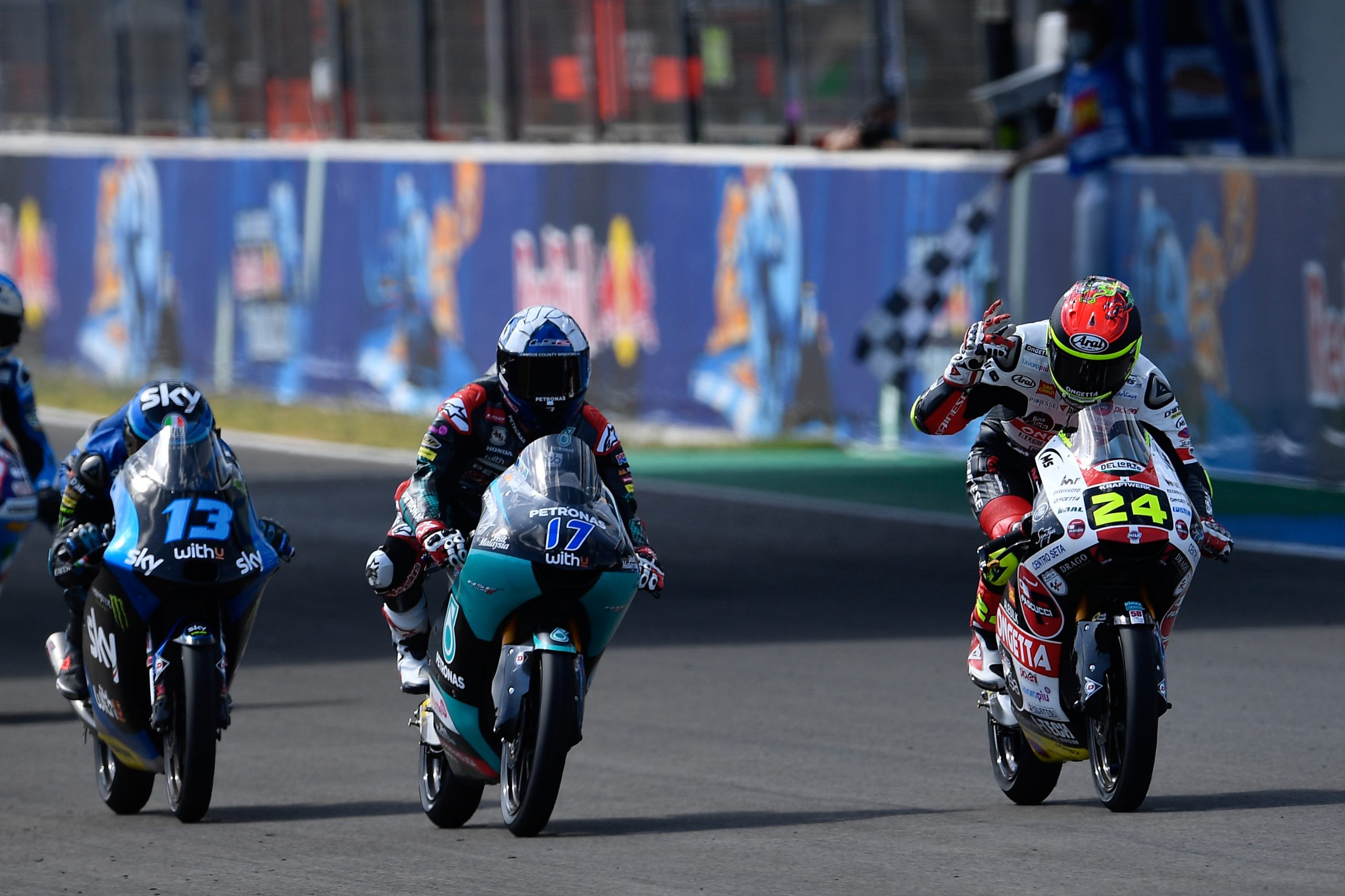 Japanese rider takes his first win of the year and becomes the first rider to win at Jerez in Moto3™ from pole.

Suzuki got the launch he would have been looking for from pole position as the Japanese rider grabbed the holeshot into Turn 1, with Gabriel Rodrigo (Kömmerling Gresini Moto3) and Ogura exchanging P2 and P3 at Turn 1 and Turn 2 as the riders safely negotiated Lap 1 in Andalucia. A rider who was negotiating the pack efficiently was Darryn Binder on the CIP Green Power KTM, too, as the South African was up to the point-scoring positions on Lap 2 – from 25th on the grid and setting two fastest laps in a row to boot…

Suzuki was eager to stay at the forefront of the fight, and the Japanese rider kept himself in or near the lead throughout. Rodrigo and Raul Fernandez (Red Bull KTM Ajo) had a look at the 24 on a few occasions and despite getting by, Suzuki would then simply bite straight back at the first opportunity. The came the first Championship contender drama as Jaume Masia (Leopard Racing) took out Ogura at Turn 9, tucking the front.

At the front of the race though, it remained a lead group of 10 with 10 laps left. Suzuki remained at the head of the train, with Rodrigo having another pop, but the Japanese rider was again back at the front a few corners later. McPhee had slowly picked off his rivals too and was up to third and then second at Turn 5 with nine laps to go, but it seemed it was set to be another classic scrap for the win and podium places between the top 10.

The second big bout of drama for the Championship then hit. With eight laps to go, Arenas had been looking comfortable in the lead group but the Spaniard was suddenly down at the fast Turn 11 right-hander, taking a heavy tumble and heading to the medical centre for a check-up – rider ok. With the previous top two riders in the title race out, it was suddenly a big opportunity for the likes of McPhee and Suzuki to capitalise…

Ultimately, it would end up as a six-way scrap for victory in the latter laps as Tony Arbolino (Rivacold Snipers Team) dropped off the pace, as did Fernandez, with birthday boy Deniz Öncü (Red Bull KTM Tech3) also then crashing from the group at Turn 5.

Could anyone get the better of Suzuki? Ultimately not, with the shuffle at the final corner free of drama this time around and the Japanese rider able to keep ahead to the line. McPhee avoided the bad luck of his Spanish GP and was only half a tenth off in the end, with Vietti a similarly tiny gap back in third.

Binder completed the fairytale comeback this weekend as he took an amazing fourth place – up 21 positions from where he started – with Rodrigo completing the top five. Fernandez took sixth, ahead of a P7 for Jeremy Alcoba (Kömmerling Gresini Moto3) after the rookie was awarded a three-second penalty for not complying with a Long Lap penalty. He crossed the line fourth.

That’s it until Brno, with Arenas still leading the way but Suzuki now up into second… and McPhee lurking not far off. What will Moto3™ serve up in Czechia? Find out soon!

Tatsuki Suzuki: “I’m very happy, more than let’s say Misano, because in this race I was always in front, leading the group, and I didn’t care when I got pushed behind, I was aggressive and tried to stay at the front. This makes a huge difference! Last weekend I was very disappointed with my race, but today I’m the happiest!”