Suzuki has given its V-Strom range the GT treatment, with new versions of the Suzuki V-Strom 650 and Suzuki V-Strom 1000 now available from authorised dealerships.

Available for £1,000 more than their comparative standard models, the GT variants of Suzuki’s popular adventure machines come with three piece luggage as standard; the top box and panniers boasting a combined capacity of 64L. For those looking at the more off-road orientated models in the V-Strom range, the GT kit is also available on the XT versions of the V-Strom 650 and V-Strom 1000.

For 2017 the new V-Strom 650 gets a two-stage traction control system, which can also be switched off, low RPM assist, and Suzuki’s new easy-start system. An updated version of Suzuki’s proven 645cc V-twin produces more power and torque, helped by a new exhaust system.

Performance is also further improved thanks to a 1kg weight reduction, while practicality is also increased with a 12V DC outlet as standard; the whole package wrapped in new bodywork inspired by the firm’s iconic DR-Z and DR-Big machines. There’s also new luggage and new heated grips available as part of Suzuki’s genuine accessory range.

The newest V-Strom 1000 is also updated for 2017, and became the first Japanese adventure machine to feature corning ABS. The larger sibling of the V-Strom family also boasts a three-mode traction control system, as well as the same easy-start system and low RPM assist as the 650. A redesigned screen improves weather protection, as part of the the bike’s newly-fitted bodywork. 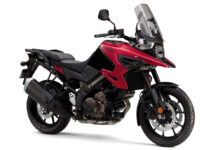