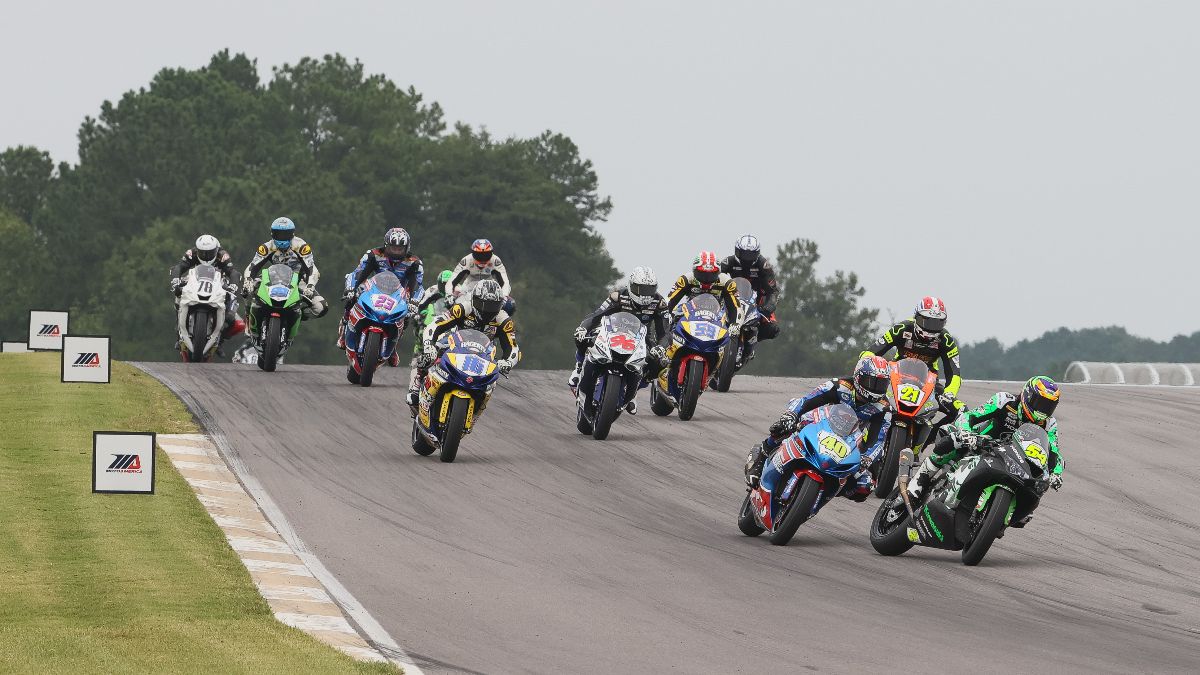 The three riders who have dominated the four support classes of late – Cam Petersen, Rocco Landers (Liqui Moly Junior Cup and Twins Cup) and Richie Escalante – did so again on an overcast day at Barber Motorsports Park on Saturday with those three winning the Stock 1000, Liqui Moly Junior Cup, Twins Cup and Supersport classes, respectively.

In Saturday’s Stock 1000 race, championship leader Cam Petersen won his sixth race of the season and fifth in a row in dominating fashion. Starting from the pole aboard his Altus Motorsports Suzuki, Petersen got a good jump and led the 13-lap event from start to finish, taking the checkers by just over seven seconds.

The battle for second place was in contention throughout the race, and it wasn’t decided until Stefano Mesa and Corey Alexander crossed the finish line. The pair of Kawasaki riders swapped positions several times as the laps wound down, and MESA37 Racing’s Mesa put himself in position to accelerate just past Ride HVMC Racing’s Alexander at the stripe. The margin between Mesa and Alexander was just .012 of a second.

“I don’t know what it is, but I’ve got a good relationship with this track,” Petersen said. “I just love it. It’s just one of those tracks that I absolutely love. Every time I come around, I’ve just got a big smile on my face. I think that has a lot to do with it. Again, the team gave me a great bike. I’ve got a pretty solid base under me now. It’s just fine little tweaks here and there. It seems like the bike was working pretty good. Looking at the lap times today, I was able to go pretty quick. So, tomorrow is probably going to be a little bit hotter, but we got to go back to the drawing board. Like I said, we’re going to make some changes in-between this race and the Superbike race and see. I want to get into the 24‘s so bad. If I can do a 24.9 either today or tomorrow, I’ll walk away from this place extremely happy. Big shout out to my team. I can’t thank them enough. And shout out to these guys for pushing me to go all the way.”

Saturday’s Supersport race featured another close battle among the three frontrunners—at least in the beginning. HONOS Kawasaki’s Richie Escalante, M4 ECSTAR Suzuki’s Sean Dylan Kelly, and Celtic HSBK Racing Yamaha’s Brandon Paasch raced each other hard, and Escalante and Kelly even made contact at least once in the early going of the 20-lap event as they swapped the lead.

Escalante, however, took the lead for good on lap four and began to build his lead. Kelly and Paasch were in second and third until lap seven, when RiderzLaw Aguilar Racing Yamaha’s Jason Aguilar passed Paasch for third.

At the checkered flag, Escalante notched his 10th win of the season by more than 13 seconds over Kelly, with Aguilar crossing the finish line in third.

“For sure, it’s very fun,” Escalante said. “It’s better to compare the last races so I’m happy about that. Then the last laps, for sure, is very fun. I think Sean (Dylan Kelly) is a great rider. Sometimes, we touch, but it’s part of the racing. I’m really happy with the first laps. I tried to look in first position. I started to run very quick laps and then really consistent. So, I’m really happy. I’m working a lot with my team to improve a little bit this weekend. This week, I try to change my mentality, more enjoying the weekend, race by race. I’m really happy. Today, my bike is working amazing. I think my riding, too, for the tires is a little bit more consistent. It’s why we have a very good pace this weekend. Maybe we try another thing in the morning. For sure, always Sunday’s race is more difficult the race. I’m very happy. Thanks to my team. We keep working tomorrow.”

Last year’s Liqui Moly Junior Cup Champion Rocco Landers is on the verge of repeating his 2019 feat, and it’s been a steamroller-like campaign for him during this 2020 season. In Saturday’s race one, the 15-year-old Oregonian started from the pole, and led every lap to take his 10th victory in a row. It was another dominant performance for Landers aboard his Norton Motorsports/Ninja400R/Dr.Farr/WonderCBD Kawasaki as he crossed the finish line with a gap of nearly 12 seconds over second-place finisher Sam Lochoff.

Meanwhile Lochoff, who was aboard his Celtic HSBK Racing Kawasaki, raced neck and neck with Benjamin Gloddy, with each rider taking turns in second place. At the checkered flag, it was Lochoff, who clinched the second step on the podium with Gloddy bringing his Quarterley Racing/On Track Development Kawasaki across the finish line in a very close third.

“I showed up, and I had that feeling again, ready to go,” Landers said. “I felt like I was just in the zone, going good. I was feeling great the entire race. The whole race, (my lap times were) within a half a second, even when I started to lose the tire at the end. Just kept pushing, kept hammering away to build up a lead at the finish.”

Junior Cup race one winner Rocco Landers competed in back-to-back races on Saturday, the youngster also lining up for the afternoon’s Twins Cup race one. Landers, who is the points leader in both race classes, rode his SportbikeTrackGear.com RoadracingWorld.com Suzuki to victory, and at one point, Landers was being caught by Kaleb De Keyrel until De Keyrel crashed out of the race, unhurt.

That handed the battle for second place to Hayden Schultz Racing’s Hayden Shultz, who barely nipped Robem Engineering Suzuki’s Jackson Blackmon at the line in a near-photo-finish for the pair, with Blackmon settling for third.

When Landers was asked about the fact that De Keyrel was catching him, he said, “I knew I was going slower, for sure. I started to lose the tire in the race. My pace started to fall off. I went from 1.9 to 1.4. I looked back, and he was right there. I looked back on the last corner and he wasn’t there. So, I’m sorry that (crash) happened to him. It would have been way close. I don’t know if I would have been able to beat him after that. I’m happy with the results. Super happy with the points.”