The FIM is pleased to announce the return of the FIM Historic events, namely Charade Heroes on 26/27th September to be held in Charade, France. The event will go ahead whilst fully respecting all the restrictions and guidelines associated with the COVID-19 pandemic and taking all the necessary precautions to ensure the safety of all involved.

This will mark the second edition of this event, the return coming two years after Charade Heroes celebrated its sixtieth anniversary. Once again, the Charade Circuit close to Clermont-Ferrand, will welcome an exceptional array of motorcycles and

Around one hundred and twenty bikes are expected and will include classic motorcycles and sidecars from 1959 to 1974. This FIM Historic Event organised by the Spirit of Speed association covers over fifty years of motorcycling in total with exhibits ranging from 1950 to 2006. Visitors will be able to enjoy a selection of Grand Prix machines from all classes, plus Endurance, Superbike, amongst them the Yamaha 750 TZ; the Moto-Guzzi 500 Dondolino from 1950 – this being one of the first real competition machines sold to private riders and capable of reaching 170 kph with its 33hp and 4-speed gearbox. The line up will also boast the 1974 Suzuki 500 G-54, developed by Suzuki to enter into the 500cc Grands Prix and tested by Barry Sheene in particular. Jack Findlay also rode the Suzuki 500 G-54 in the famous film “Continental Circus”.

During the two-day event a tribute will be paid to the outstanding career of the two Sarron brothers, with 2020 marking the occasion of the sixty-fifth birthday of Christian Sarron and sixty-five years of Yamaha for whom the rider from Auvergne is an ambassador. 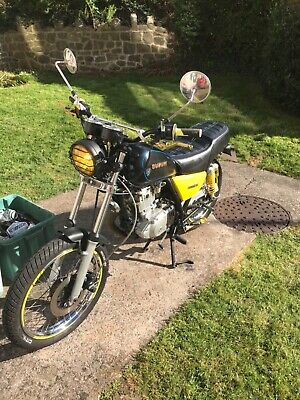