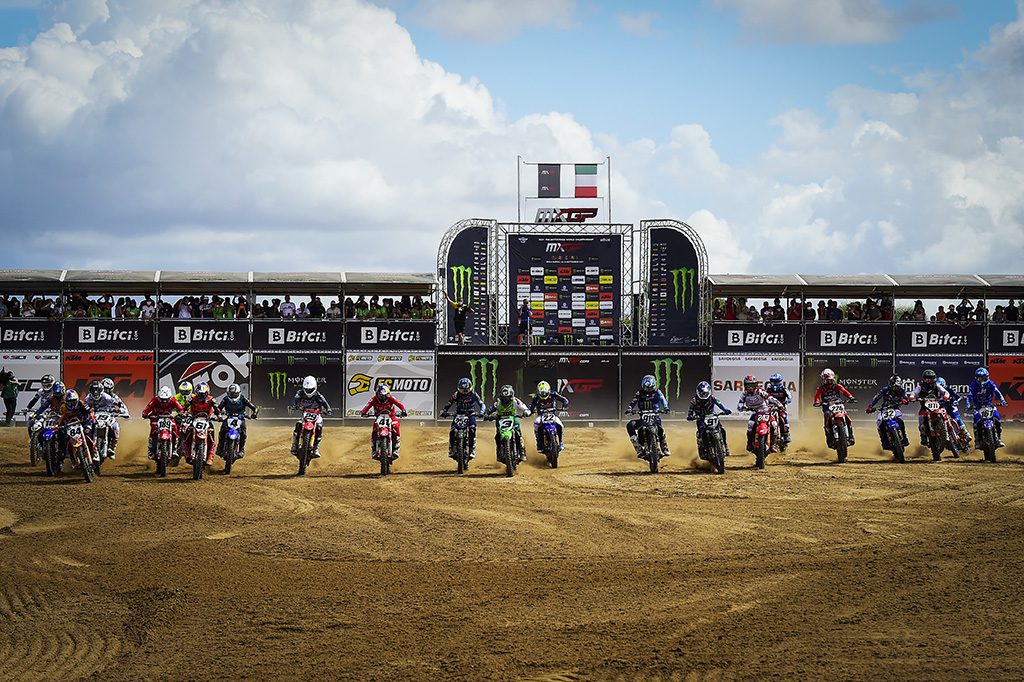 The FIM Motocross World Championship continues this weekend with a back-to-back Grand Prix which will head to the ‘Island of Sport’ as Riola Sardo will host the second edition of the MXGP of Sardegna.

Riola Sardo is a well-known circuit among the riders in the paddock, as it is a regular stop of the famous Internazionali d’Italia and now part of the MXGP calendar for the second year in a row.

The circuit itself is a typical sand track, though very particular, as despite any rain or water the ground dries very quickly. In comparison to other sand tracks on the calendar, such as Lommel, Riola Sardo is not as deep but still presents a big challenge to the riders.

Last year there was plenty to celebrate at the MXGP of Sardegna as it made its debut to the FIM Motocross World Championship. Not only did it host one of the most intense racing weekends on the calendar that saw the MXGP title chase take a huge turn, but it also hosted the finals of the EMX65 and EMX85 Championships.

In MXGP, all eyes will be on the championship leader Tim Gajser of Team HRC who will enter the MXGP of Sardegna as the man to beat. Last year, Gajser arrived in Riola Sardo with a fresh shoulder injury and that weekend he also lost to championship lead to Red Bull KTM Factory Racing’s Jeffrey Herlings. But this time around things will be different, as currently Gajser is 81 points ahead and has an incredible track record so far, with six out of seven GP victories this season so far and having gone 1-1 at the last three Grand Prix’s consecutively.

Both riders looked strong in Maggiora, but it will be interesting if they can take their success from the hardpack track to the sandy Riola Sardo and repeat their success once again. Last season in MX2, Renaux had some nice battles with Red Bull KTM Factory Racing’s Tom Vialle and ended up on the box, so there is no reason he cannot do that again this time around in MXGP.

Gebben Van Venrooy Yamaha Racing’s Calvin Vlaanderen was impressive during the MXGP of Maggiora as he got his first top four overall result of the season. In the opening heat of the MXGP class, Vlaanderen took his first Fox Holeshot of 2022 and led six laps of the race. The Dutchman eventually drifted back to fourth for his best result of the year so far. And following such a positive weekend, it would be nice to see Vlaanderen build upon that in Riola Sardo, where he actually finished fourth overall too last season with a consistent 4-4 result.

Another rider to watch this weekend is Kawasaki Racing Team MXGP’s Ben Watson who also had his best weekend of the season in Maggiora. The Brit was the second recipient of the Fox Holeshot in the second MXGP race and briefly led too. In the end the Brit was able to bring it home in fourth for sixth overall, which will no doubt be a huge confidence boost. Watson has struggled in the beginning of the season, but hopefully the result last weekend in Italy will be just a stepping-stone for the factory Kawasaki rider onto better things for the rest of the championship.

Home rider, Alberto Forato of SM Action Racing Team YUASA Battery was the top scoring Italian at the MXGP of Italy in Maggiora last weekend, finishing 15th overall which was probably not his best result this season. But Forato has been consistent this year and often battling at the sharp end, week in week out, therefore a solid result can be expected from him.

In Maggiora we also saw the comeback of Beta SDM Corse Racing Team’s Alessandro Lupino who had several surgeries to clear the infection from appendicitis. In race one Lupino managed 14th which was his best result but still a very good effort as he rides himself back to strength. This weekend will be tough for the Italian but no doubt a challenge that he will take on with both hands.

Though possibly the biggest news of the weekend is that Red Bull GasGas Factory Racing’s Mattia Guadagnini will step-up to the MXGP class from this weekend as he tests his abilities on the biggest 450cc bike to see if he will be better suited to the more powerful engine. While Riola Sardo is not the easiest track to make an MXGP debut, there is no doubt that Guadagnini will be more motivated than ever to use this weekend as a great learning race. 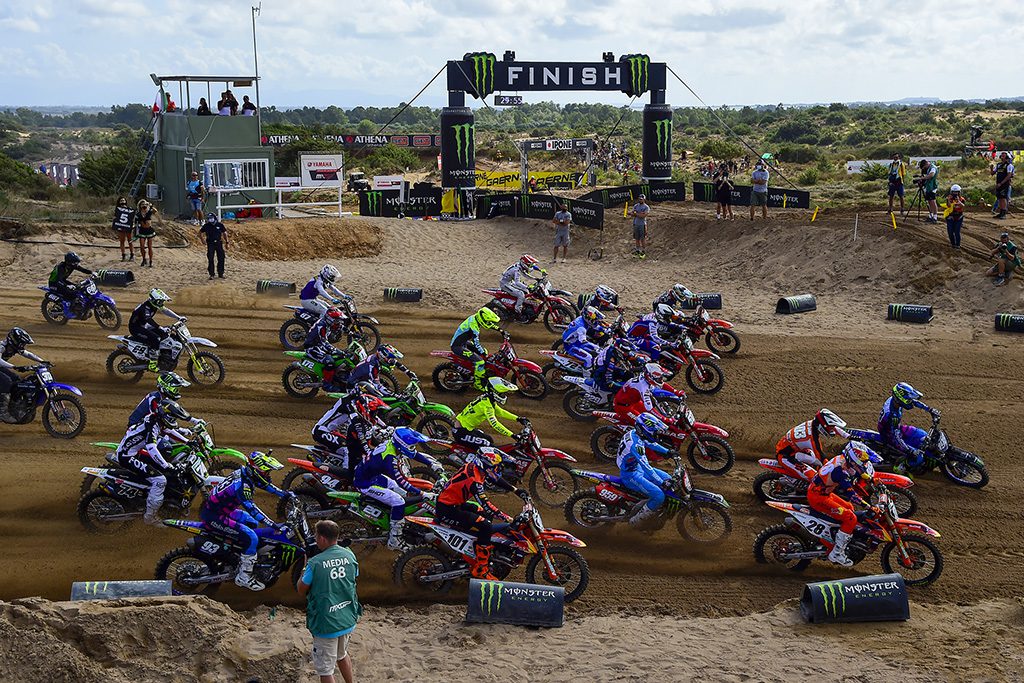 Geerts is among the favourites for the top step this weekend as he enters the race with two back-to-back GP victories from Latvia and Italy and is also back on a sand-based circuit, which we all know is one of his strong points.

But Vialle is also a serious contender having gone 1-1 last year in Riola Sardo after some nice battles with Renaux and Geerts too. While the last two weekends have not been the best for Vialle, this doesn’t mean he is not capable of bouncing back with a victory in Sardinia.

Unfortunately Nestaan Husqvarna Factory Racing’s Kay de Wolf who is typically another strong sand rider, is forced to miss the MXGP of Sardegna due to a hand injury.

During the last race in Italy, a few rides stood out which should be interesting to keep an eye on for this weekend, one of those riders being Stephen Rubini from Ship to Cycle Honda SR Motoblouz. The Frenchman looked impressive in the opening race as he challenged Geerts for the race win and ended his weekend with his first ever MX2 podium, which means he will enter this race full of confidence. Of course the biggest thing will be whether he can deliver the same performance on the sand as he did on the hard pack.

It will also be interesting to see what Hitachi KTM Fuelled by Milwaukee’s Isak Gifting and Kay Karssemakers can show this weekend after some strong results in Maggiora. Gifting finished race one in third last weekend which was one of his best rides this season, but if we also look back on his results last year, where he finished fifth overall, we could see another nice ride from the Swedish rider this weekend.

There’s also Diga Procross KTM Racing Team’s Liam Everts who turned heads at the Italian Grand Prix, finishing in fourth, after battling at the sharp end for the entire race, but then unfortunately failed to match the result in race two. This weekend it would be nice to see Everts deliver two solid results for a strong overall scorecard, especially coming back to a track that he lined-up for one of his first races in MX2 just last season.

Red Bull GasGas Factory Racing’s Simon Längenfelder had a positive weekend in Maggiora with a fourth overall. In the last few has struggled, but last week it looked like Längenfelder made a step in the right direction.

This weekend, F&H Kawasaki Racing’s Kevin Horgmo could be another rider challenging at the sharp end as he proved in Latvia that his sand riding is rather strong, which is no doubt thanks to the hard work put in by the Norwegian and the team coach Marc De Reuver. In Kegums Horgmo scored his first ever MX2 podium and led some laps too. 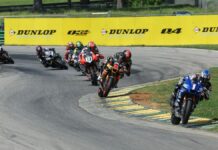 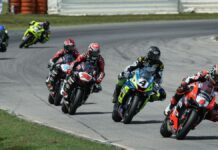 Close Racing Is The MotoAmerica Order Of The Day At VIR