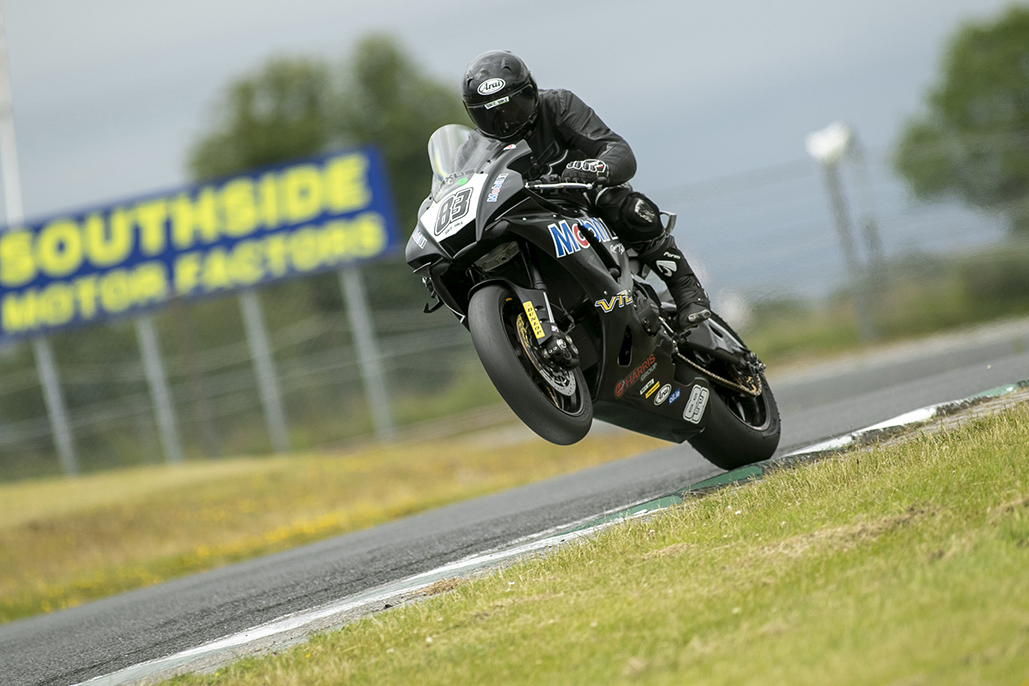 The 2021 Dunlop Masters Superbike Championship got off to a flying start on the Mondello Park International Track on Saturday and Sunday (June 26th & 27th) with full grids and highly competitive races. The headline Superbike championship produced a rare outcome, with three different riders taking wins, while Supersport had two different winners as five riders shared the podium positions.

The first Masters Championship races for nine months attracted the biggest grids the championship has ever seen with the Superbike, Supersport and Twins entries oversubscribed. The Superbike class saw a record forty two riders contest qualifying to see who would take the thirty three spaces on the championship race grid and it was triple champion Richie Ryan who grabbed pole position from long time rival Luke Johnston and the returning Derek Sheils.

Saturday’s race one was a battle between the front row starters with Sheils leading initially from Johnston and Ryan. Feeling the pressure from Ryan, on lap two Johnston moved to take the lead and then held on for the remainder of the race to take a narrow win from Sheils and Ryan. The Superbike Cup class saw Evan O’Grady take his first class win from James Rowe and Dean O’Grady.

Race two for Superbike was a Richie Ryan benefit as he broke away right from the start and was never challenged. Sheils, Johnston and Michael Sweeney chased hard but could not close the gap. Sheils retired at half distance leaving Ryan to win by eight seconds from Johnston and Sweeney, who grabbed his first Masters Superbike podium. Declan Madden was a first time winner in the Cup class from O’Grady and Rowe.

The final Superbike race was interrupted by a crash and was restarted as a four lap dash. Sheils led all the way in the re-run to make it three different Superbike winners for the first time at a Masters event. Ryan and Johnston followed Sheils until the race one winner crashed out leaving Ryan second and Sweeney third. Ryan now leads the championship by a healthy margin from Sheils and Johnston, in joint second, while Sweeney sits fourth. In the Cup class a second win gave Evan O’Grady the championship lead with Madden second and Dean O’Grady third.

With yet another jam packed grid the Supersport races provided as much action as the Superbikes. Pole Sitter Kevin Keyes was beaten away from the lights by series debutante Adam McLean, with the two riders with extensive British Championship experience pulling away from the pack. The lead battle raged for the full race distance with McLean getting the verdict by less than a tenth of a second. The Burrows Racing duo of Paul Jordan and Mike Browne were next up, just over six seconds back.

Race two followed the same pattern but this time Keyes pulled off a fantastic last corner move to take his first outright win at the Masters. Mike Browne improved by one place to finish fourth well clear of Andrew Murphy. McLean did not take the start of race three leaving Keyes to cruise to his second win ahead of Browne and Murphy, which gave him a healthy twenty one point championship lead over Browne and McLean. The Supersport Cup class proved to be the more competitive of the two divisions with teenager Scott McCrory taking two impressive wins and Kevin Dempsey securing the other. McCrory leads the championship from Dempsey with the other two riders to make the podium, Robert O’Connell and Eoin O’Siochru, sitting third and fourth.

The Principal Insurance Pre-Injection class saw Newcomer Noel Dunne take an impressive win in Race One from Ian Prendergast and former champion Darryl Sharkey. Sharkey bounced back to win the next two races from Prendergast, with Dunne retiring from race two and returning to the podium with third in race three. Slane Maguire was the only other rider to make the podium, taking third in race two. Following the opening three rounds Sharkey leads the way with a six point margin over Prendergast.

The newly named DM Groundworks and FJS Plant Junior Championship, saw Scott McCrory take the opening win in the Junior Supersport division with Reece Coyne then taking over to win the next two. McCrory and Jack Ferris shared the podium behind Coyne who now leads the championship. In Moto1, Jeff Quilter, Lee Hara and Josh O’Brien all took wins but it is O’Brien who heads the points courtesy of his win and two second places.

The Dunlop Masters Superbike Championship returns to Mondello Park on July 24th and 25th for three more rounds on the National Track layout.