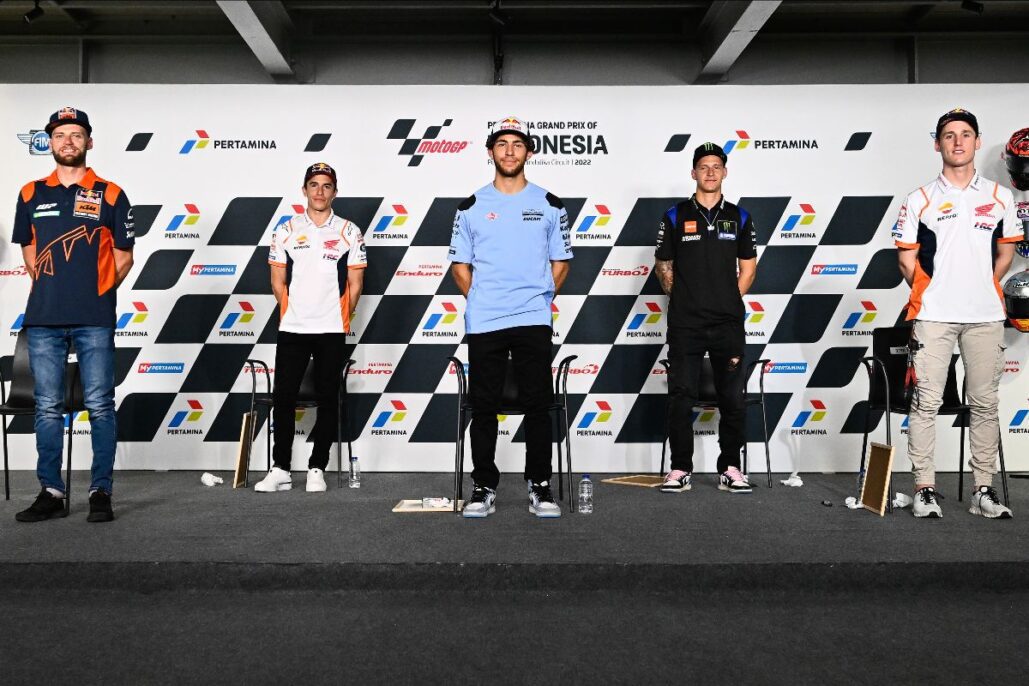 Riders ready to head out into the Indonesian heat as the paddock returns to Lombok.

QUOTES
How important was it for you to win that first MotoGP race, to show you can do it, and what’s your thoughts on this weekend?
Enea Bastianini: “It was fantastic for me to win the first race in Qatar because it was unexpected for me and my team. We did a very good job during the tests but the races are another world. We have started with a good foot, especially in qualifying because I started on the front row for the first time and the race was easier for me to do.

Do you get the feeling you can be in the fight for the title?
EB23: This I don’t know because the title is very difficult to win. I won the title in 2020 in Moto2, and I’m here to win the title in MotoGP, but for the moment I don’t have a lot of experience. In Qatar I managed the race well and we’re here in Mandalika, a new track, we only did the test here, and we will see during the Championship. My target remains the top five and this remains a good target in 2022.”

What does it feel like for MotoGP to be racing here for the first time in 25 years?
EB23: “In Indonesia the fans are incredible. When we arrived there were a lot of people outside the airport, in the road, everywhere. It’s incredible to see the President for the first time, I’ve never said hello to any President, and this is very emotional for me.”

Is the main focus to build on the Qatar podium?
Brad Binder: “Qatar is a track that’s really difficult for us, we’ve had tons of struggles there in the past. Somehow with our new package things clicked from the beginning and were relatively quick there. Yeah, I’m really happy with the progress we’ve made. Definitely amazing to start the year off with a podium but we have work to do, a bit of exploring to do with our new package, to really try and find the best in every area. In general, the team and I are very happy and let’s see what we can do this weekend.”

How do you rate your chances here?
BB33: “The Test was pretty good for us a few weeks ago. From the first few laps we had a pretty good feeling and as the weekend went on we tried a few different things; some good, some not so good. In general, our pace wasn’t bad at all and when I went to do a time attack, I was able to do quite a good lap time. I feel strong and good coming into this weekend and want to take it one day at a time, one session at a time, and Sunday give my all and see where we end up.”

How much confidence and belief have you taken from your performance?
Pol Espargaro: “Overall I’m very happy how the pre-season has gone but you know, it’s difficult to expect something from pre-season. There’s a lot of nerves going on in the first race of the season, you didn’t feel that for a long time since Valencia so I was pretty nervous. When you set up a high target in pre-season, you can’t do something less. You want the maximum. I start the race in a very good mood, I set a good rhythm, I could start to do very good lap times, the race was super fast, much more than last year, this shows the performance of the bike that Honda have been working on so much during pre-season. Thanks to that I was able to fight for the victory until the last five laps, then I put the turbo on and my tyres said ‘enough’, and I couldn’t handle it. Anyway I enjoyed that race and it was a good way to start the year.

Is this your best chance to win in MotoGP?
PE44: “It was good in pre-season here, I enjoy this place. It was not easy to handle three days of testing here but I was not the only fast guy here: Enea was very fast, Marc was very fast, Fabio was very fast. Ducatis were not super fast, the factory guys, but sure they’re going to be there after solving the problems in Qatar. I expect a tight race, everyone is going to be there and hopefully we can be there as well, the same as Qatar, and fight for something great.”

What does it feel like for MotoGP to be racing here for the first time in 25 years, and treated like rockstars almost?
PE44: “Yeah as you said it’s like feeling like a rockstar, we felt what it’s like. Honestly it’s amazing to go to places like this and to show what you love, which is motorcycles, to the people that also love your sport and you’re at the highest level. It’s something crazy, difficult to explain. Going on the Jakarta roads full of people surrounding us, a lot of motorbikes behind and fans following us on bikes. As Enea said the President is a big fan with his own bike. Its like going back in time in Spain when I remember I went to the races with my father to see Criville, sleeping at the track, full of passion, and it’s so beautiful. People really love it!”

What are the main positives from Qatar?
Marc Marquez: “In Qatar it was a solid weekend. Nothing really special but we were there, not too far from the top positions, that was my target. Of course, I tried, I tried to be on the podium and to follow Enea when he overtook me but it was not the day, not the time. Let’s see, our target this weekend is to improve the result from Qatar, and then in Argentina, improve the result from here. Step by step, I’m feeling good. 22 laps in a row, it was the best feeling I had during the last two years. Let’s see how we can approach this weekend. As you say, Pol was one of the fastest ones in the Test so he will be one of the guys this weekend. Enea, Fabio and Brad are also there. Many new faces, but they are riding fast.

Does the test on the new bike give you more confidence here?
MM93: “In the Qatar race I really understood what I needed, in terms of the direction of my riding style. In Tests always it is difficult, in a practice it is difficult because you do five laps and stop, five more and stop. In 22 laps in a row, you can understand the points you are losing. We understand a little bit more and here we will start to find a way but if it is not possible then we know our base set up is working well.”

What does it feel like for MotoGP to be racing here for the first time in 25 years?
MM93: “Since I came the first time in 2014, I already felt like Indonesian fans are different. I’ve had a good relationship with them from the very first time. It is this kind of country you feel well. Yesterday was a different day and important event for MotoGP and all the riders. It’s an important country for our manufacturers and yeah, looking forward to racing here in front of all of them!”

What conclusions did you draw from the season opener?
Fabio Quartararo: “It was tough. I was expecting much more from Qatar but it’s true we didn’t have those three days testing and we were missing grip. In the race we tried something and the front pressure from the beginning was wrong so it was quite a difficult race. You always learn about your tough moments. I feel here, we were fast in the test but testing is totally different to racing so let’s see what we can achieve.

Will the Yamaha package be more competitive here?
FQ20: “I think what suits better is to have shorter straights, then testing. I made my time attack in the last minutes of the third day, Pol was already in the box and in the morning it was much more difficult I felt. Let’s see. We have all of Friday and Saturday to understand. Let’s see how the forecast is, but what is sure I will do my best to be there and fight where we feel we can fight.”