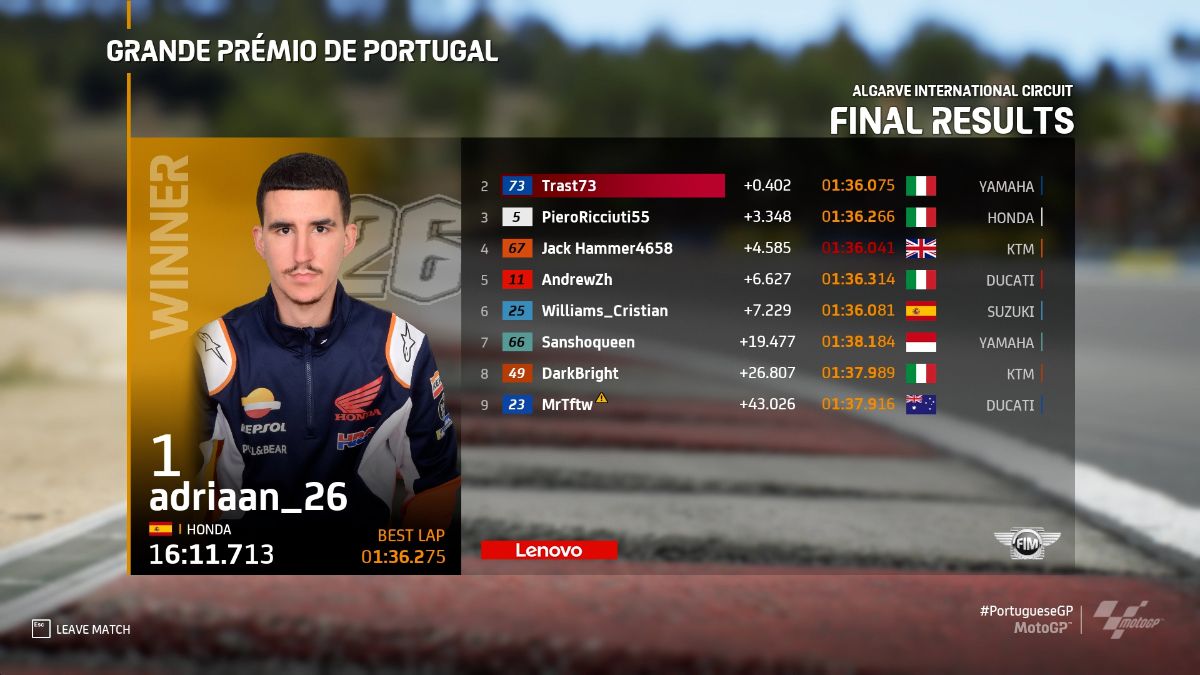 A classic battle between two of MotoGP™ eSport’s racing elite was on display during the first round of the 2021 Global Series.

There was excitement and action in equal measure in the first round of the 2021 MotoGP™ eSport Global Series with two experienced names emerging with a shared championship points lead!

In June, eleven gamers from around the world were chosen to represent one of the eleven current MotoGP™ teams for the four-round Global Series, an eight-race event that will determine the winner of the 2021 MotoGP™ eSport Championship.

MotoGP™’s Jack Appleyard and Jack Gorst combined their presentation duties with exciting commentary. The current COVID-19 pandemic restricted the eleven finalists to their homes, where they competed against one another while communicating via a communal video call.

But the action was still as intense as ever. The first race was held around the fabulous Algarve International Circuit – a first for the MotoGP™ eSport Championship – and the second one on the stunning Autodromo Internazionale del Mugello.

2019 eSport champ and Ducati Lenovo eSport Team’s AndrewZh set pole position for both races, signalling his intentions to get back to the front after a tough 2020. And it was all action from the start of race one, as early contact between Monster Energy Yamaha’s Trast73 and Suzuki ECSTAR’s Williams_Cristian when disputing the lead allowed a host of other names through.

The drama didn’t end there, as there was further contact when AndrewZh and Red Bull KTM Factory Racing’s Jack Hammer4658 came together at turn one at the start of the second lap. That allowed Adriaan_26, the reigning MotoGP™ Champion, and Trast73 through. From there, it was a classic cat-and-mouse contest, with Trast73 shadowing his rival.

The pair have history. They both contested the 2020 MotoGP™ eSport Global Series until the very last race, and this contest showed 2021 is poised to follow suit. Adriaan_26 showed he is an expert at dealing with relentless pressure, with the Spaniard resisting Trast73’s attention and winning by just 0.402s.

While two established names were battling up front, a Global Series rookie turned heads with a stunning performance to complete the podium. LCR Honda Castrol eSport Team’s PieroRicciuti55 was a brilliant third, ahead of fellow Global Series newcomer Jack Hammer4658, who recovered well from a crash on the second lap to finish fourth, with AndrewZh fifth.

Race two was more of the same. And this time it was Trast73 who got the jump and led from turn one. From there, it was an exhibition in concentration, as the Italian headed off race-long pressure from Adriaan_26 and AndrewZh. The three were never more than 1.5s apart on track, but the Yamaha man was faultless, as he came home 0.713s ahead of Adriaan_26, with AndrewZh 1.3s back in third.

The real drama came just behind as PieroRicciuti55 enjoyed a fierce battle with Williams_Cristian. The Suzuki Ecstar competitor looked to have wrapped up fourth place with a fine overtake at the final corner on the final lap. But the LCR Honda Castrol eSport Team man out-dragged him to the line for the two extra points that come for fourth place.

The results leave Trast73 and Adriaan_26 tied on 45 points at the top of the Global Series standings, with PieroRicciuti55 (29 points) and AndrewZh (27 points) 16 and 18 points behind respectively.