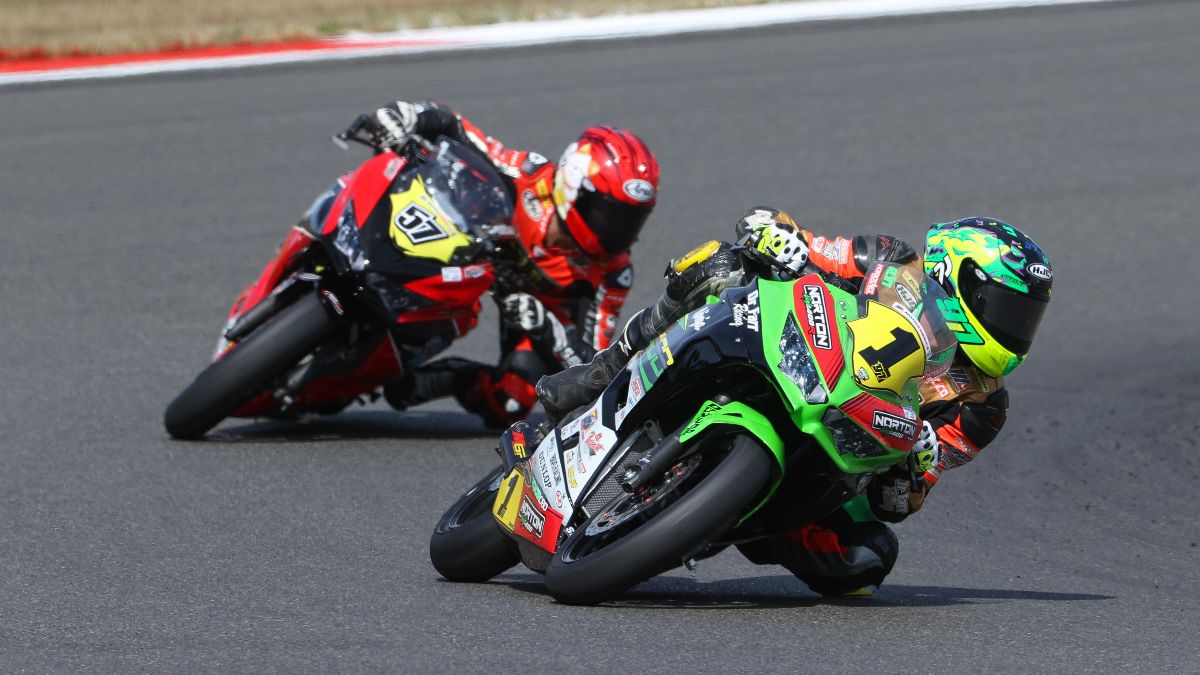 HONOS Kawasaki’s Richie Escalante met the first stumbling block in his 2020 MotoAmerica Supersport season at the Ridge Motorsports Park two weeks ago, though his reason for tripping up was through no fault of his own. Now we get to see how Escalante responds to his first crash of the MotoAmerica season and his first non-finish after the most dominating rider in the series thus far was taken out of the second race at the Ridge in the first corner.

Bring on New Jersey Motorsports Park and round six of the series.

Picking up the pieces after Escalante was knocked off his Kawasaki ZX6R in the first corner was M4 ECSTAR Suzuki’s Sean Dylan Kelly, the Floridian riding away to an easy victory – his second of the season. The win combined with Escalante’s misfortune also gives us a championship fight again as the pair are now separated by 30 points instead of 55, which was the margin going into Sunday’s race two at the Ridge.

Celtic HSBK Racing’s Brandon Paasch also looked set to take advantage of Escalante’s crash as he was battling for the lead with Kelly in race two. Unfortunately, Paasch crashed out of the battle and thus failed to gain any ground in the championship. Paasch is now 88 points behind Escalante and 58 points behind Kelly. However, Paasch will be racing on his home track this coming weekend at NJMP.

If all that isn’t interesting enough for you, let’s not forget the on-going war of words as it relates to Escalante and the Kawasaki ZX6R vs. Kelly and the Suzuki GSX-R600 and the much quieter Paasch and the Yamaha YZF-R6.

If Superbike Championship points leader Cameron Beaubier and Escalante are the hottest riders in the MotoAmerica paddock right now, then Rocco Landers is a fast-gaining third in that battle.

Landers has won seven Liqui Moly Junior Cup races in a row and three of the last four Twins Cup races as the 15-year-old does double duty in a spirited effort to walk away from 2020 with two MotoAmerica titles.

In the Liqui Moly Junior Cup Series battle, Landers and his Norton Motorsports/Ninja400R/Dr. Farr/Wonder CBD-backed Kawasaki Ninja 400 are doing their best to not make it one. He is now 48 points clear of Dominic Doyle, the BARTCON Racing-backed South African fighting to hold back the spirited efforts of late by fellow countryman Samuel Lochoff on the Celtic HSBK Ninja 400. Those two are now separated by 25 points in the fight for second in the title chase.

In Twins Cup, Landers finds himself firmly in the fight for the title with 1-833-CJKNOWS Accident & Injury Law’s Kaleb De Keyrel just eight points clear of Landers, 135-127. Both riders have won all six of the races (three races apiece) as the championship has quickly turned into a two-man race.

Jason Madama is third in the championship heading to NJMP, the Syndicate Racing/Apex Assassins-backed racer from Colorado is locked in a battle royale for that spot with Robem Engineering teammates Jackson Blackmon and Toby Khamsouk and Hayden Schultz Racing’s Hayden Schultz. Those four are separated by just eight points in the fight for third.

The Stock 1000 Championship also looks like it will go the distance with Altus Motorsports Cameron Petersen leading Ride HVMC Racing’s Corey Alexander by 12 points. Petersen has the hot hand heading to NJMP, however, with the South African winning the last three races.

Third in the title chase is held by M4 ECSTAR Suzuki’s rising star Alex Dumas, though the French Canadian suffered a broken elbow in a crash at the Ridge and he will be fighting that injury if he indeed lines up in New Jersey. Dumas is 11 points ahead of Michael Gilbert Racing’s Michael Gilbert, the Californian finishing second to Petersen at the Ridge for his best result of the season thus far. Stefano Mesa and Travis Wyman Racing’s Travis Wyman are tied and just a point behind Gilbert heading to NJMP even though Mesa didn’t travel to Washington State to race at the Ridge. Wyman, meanwhile, finished fourth at the Ridge.

Both Liqui Moly Junior Cup races at NJMP last year were won by Rocco Landers. In race one, Landers beat Jackson Blackmon and Eziah Davis. In race two, it was Damian Jigalov and Kevin Olmedo chasing Landers to the finish line.

Alex Dumas, who would go on to win the Twins Cup Championship in his debut season, took the victory in the Twins Cup race at NJMP last year. Dumas beat Blackmon and Curtis Murray with Blackmon just .354 of a second behind Dumas.