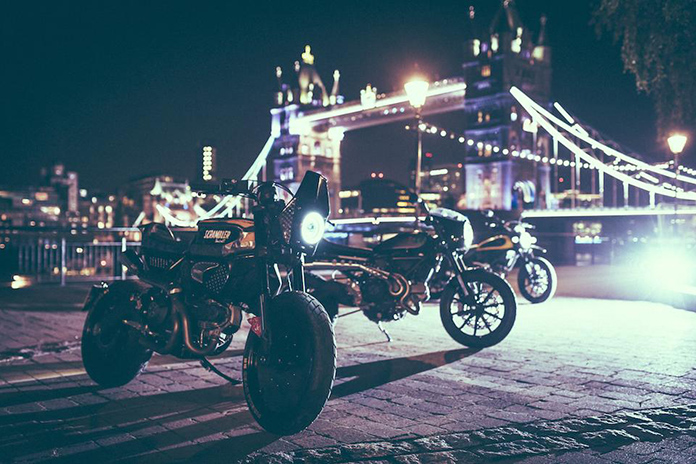 The Ducati Scrambler is heading for Wheels and Waves 2015 with its Land of Joy. This well-known French event, to be held from 11 to 14 June in Biarritz, attracts enthusiasts from all over the world, year after year, all eager to experience a weekend of two-wheeled fun and surfing. Wheels and Waves, launched four years ago by six French motorcyclists with an unbridled passion for bikes, waves and art, is nothing less than a true festival that’s all about getting together and sharing, a festival that draws more and more people with every new edition.

Wheels and Waves is the last stage of a tour which saw the SC-Rumble (a special Ducati Scrambler-based custom bike built by Vibrazioni® Art Design in collaboration with Pirelli) leave London on 7 June. The SC-Rumble was presented on 22 May at the Bike Shed fair in London: the guys from Vibrazioni® Art Design later set out for Biarritz from the Tobacco Dock, the building near Tower Bridge where the event was held. The SC-Rumble, after leaving the United Kingdom by ferry, reached Calais and continued heading southward via Mont Saint-Michel and on toward Nantes and Arcachon ahead of its arrival at the world-famous surfing resort of Biarritz.

Plenty of Ducati Scrambler fans and friends joined them on the way, including Mr. Martini, who also set out from London on his own S. C. R. Scrambler-based special, presented on 23 January at the Motor Bike Expo in Verona. Moreover, another Ducati Scrambler custom bike has also arrived in Biarritz: the ‘Magione’, prepared by renowned Belgian customizer Fred Krugger, winner of the Custom Bike Building World Championship in 2010 and 2014.

Fred Krugger’s Scrambler has undergone changes to the tank and frame. It also has an original single-seater metal tail fairing and a new tubular steel swing arm. The exhaust has also been overhauled and there is now a high-mounted dual silencer on the right.

At the Ducati Scrambler stand in Biarritz (which, in typical Wheels and Waves fashion, is underneath a military-type tarpaulin), numerous Scrambler-based specials will be on display until 14 June. These will include the ‘Hondo Grattan’ by Deus Ex Machina and the ‘Scratch’, built by Officine Mermaid, presented on 23 January at the Motor Bike Expo in Verona. Another ‘special guest’ in the Scrambler area will be the Hero1, an independent build by Holographic Hammer and Moto Heroes.

Lastly, the Wheels and Waves art gallery will display the excellent work dedicated to the Ducati Scrambler by Japanese artist Gao Nishikawa.