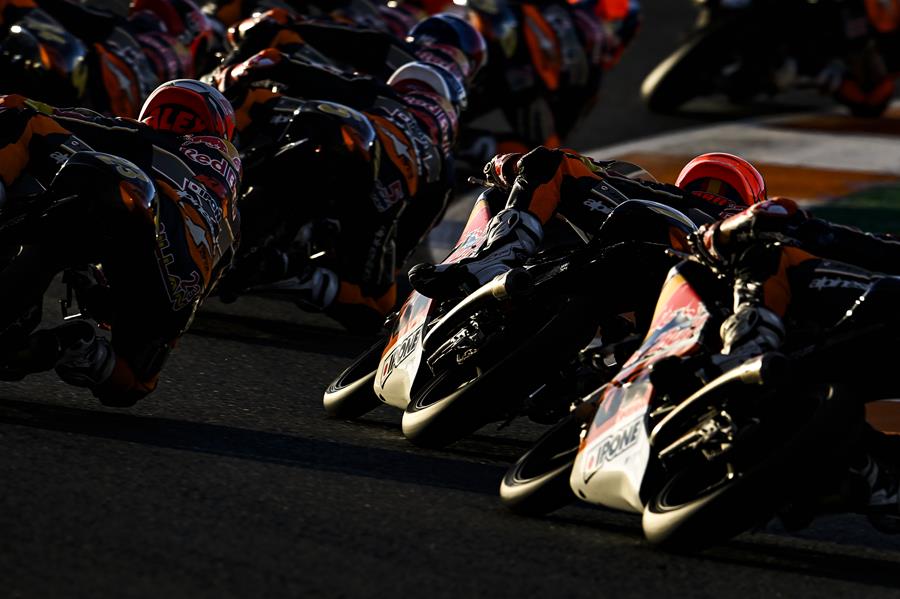 As we head into our second weekend in Valencia both the Red Bull MotoGP Rookies Cup and the three Grand Prix World Championship classes have two races remaining in the 2020 season.

Our champion has been decided, Pedro Acosta has won and already has plans to step directly into the Moto3 World Championship in 2021.

He is inspired by Rookies that have gone before him, Raul Fernandez who won last weekend’s Moto3 Grand Prix, Enea Bastianini who leads the Moto2 World Championship and Joan Mir who heads the MotoGP title chase.

It is not just Rookies Cup champions who move on to great things, neither Bastianini or Mir won the Cup but they were race winners as were Brad Binder and Miguel Oliveira.

The fight for 2nd and 3rd in our Cup, the desire to win those last races of the season, is extremely important, the world is watching. The GP teams have their eyes open too and often snatch the Rookies before their 2nd or 3rd seasons.

So who will star on the stage this weekend in the last two acts? There are 6 riders fighting over the 2nd and 3rd in the points table headed by Colombian 14-year-old David Alonso.

After that it is all Spain with 16-year-old Iván Ortolá currently holding 3rd ahead of Sunday’s victor Daniel Holgado. Saturday’s winner, 16-year-old David Salvador, is 5th. With Alonso and Ortolá having won at Motorland Aragón we are looking to 14-year-olds David Muñoz and Daniel Muñoz, who are not related, for likely first time winners.

They have both been on the podium, Daniel more frequently that David but of course they want that first win. Don’t count out the rest of the field of course. Zonta van den Goorbergh stands 8th in the points table and wants that first podium, the Dutch 14-year-old just missed out last Saturday.

It ain’t over until…

4th is also the best so far achieved by Spanish 16-year-old Izan Guevara but he has the form to get things done in the last two races. For Australian 18-year-old Billy van Eerde it has been a tough year but he is capable of ending his third Cup season in a big way.

These last two races are likely to make a nonsense of any form and predictions though. Acosta scored 150 points from the first 6 races, a Rookies record. He has only netted 46 from the last 4.