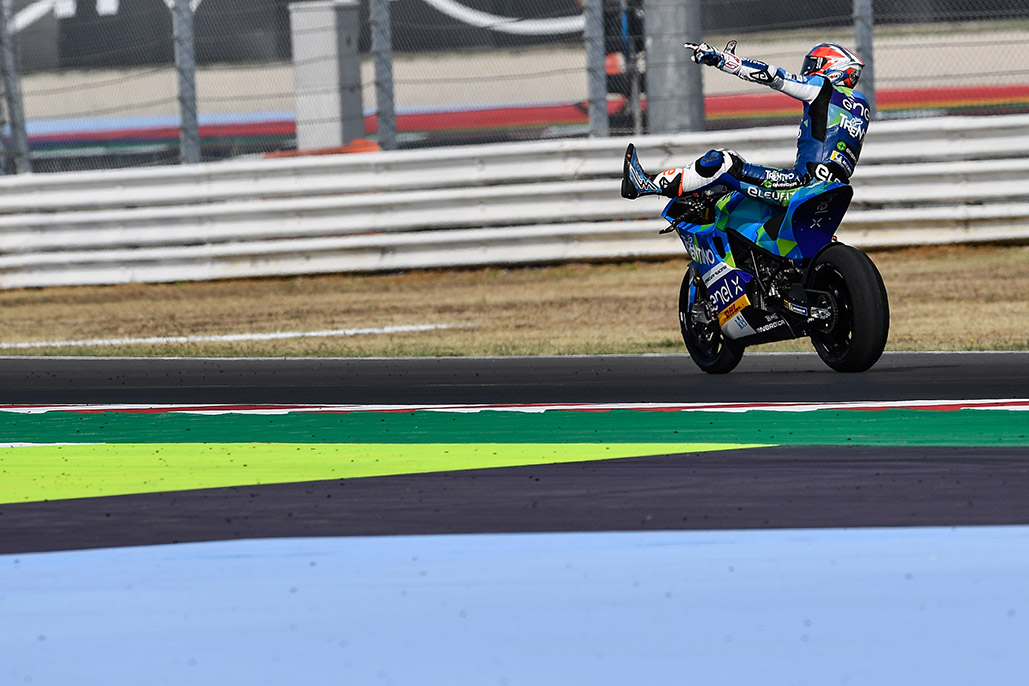 The Trentino Gresini MotoE rider makes it four from five on the Riviera di Rimini as Aegerter crashes out.

Matteo Ferrari (Trentino Gresini MotoE) is back on top! After Race 1 at Misano World Circuit Marco Simoncelli saw the Italian’s winning streak come to an end, Sunday flipped the fortunes as the number 11 won his fourth race in five at the venue, ahead of a close battle for the podium between Mattia Casadei (Ongetta SIC58 Squadra Corse) and Jordi Torres (Pons Racing 40) ultimately won by the Italian. Big drama erupted at the front too, with former points leader Dominique Aegerter (Dynavolt Intact GP) getting taken out by Tommaso Marcon (Tech 3 E-Racing) and failing to score despite remounting.

Polesitter Aegerter got the holeshot into Turn 1, tussling past Ferrari, but the the Italian made a move into the lead on the opening lap down into Turn 8 – and led over the line. Tommaso Marcon (Tech3 E-Racing) had made a good start and sat third, but Casadei dived up the inside at Turn 1 on Lap 2. That set the scene for the key drama in the race: trying not to lose the final podium position, Marcon broke late into Turn 2 but it was too late, and Aegerter was in the firing line. Marcon hit the number 77’s rear tyre as both riders went down at Turn 2. Both ok and Aegerter managing to remount but out of the fight for points.

The incident left Ferrari with a comfortable eight tenths advantage up front, with Casadei and Torres chasing the Italian. The gap between Ferrari and the Casadei-Torres battle got down to about half a second initially, but there it stayed as Torres was unable to make a pass stick. The Italian and Spaniard swapped positions at Turn 4 as Casadei ran wide, but Torres was then really wide at Turn 10 and the duo switched again. For Ferrari, it was just more breathing space at the front…

Heading onto the last lap, Ferrari had the win in the bag, but second and third were yet to be decided. Torres was hounding Casadei but the latter was supreme on the brakes into all the passing opportunities. Having a good run down the back straight through the fast Turns 11 and 12, Torres got his rear tyre smoking through Turn 13 and looked like he was going to make a late lunge into Turn 14. However, again, Casadei was simply brilliant on the brakes and Torres held station, taking the podiu and some valuable points. Meanwhile, 1.3 seconds up the road, Ferrari took the chequered flag in P1 to stand on the top step of the podium for the fourth time in five at Misano, taking the points lead.

Casadei rode an awesome race to keep Torres behind him to the line, the duo both happy with podiums at Misano and right in the hunt near the front, with just 15 points covering Ferrari, Aegerter, Torres and Casadei heading into the final round at Le Mans.

Fourth place went the way of Niccolo Canepa (LCR E-Team) who picks up his best result of the season, and the same is true for rookie Alessandro Zaccone (Trentino Gresini MotoE) in P5 in Race 2. After his Race 1 crash at Turn 16, Mike Di Meglio (EG 0,0 Marc VDS) was able to pick up a solid P6, just 0.051 ahead of Eric Granado (Avintia Esponsorama Racing) as both fought through after starting from the back of the grid due to their Race 1 crashes and the new Race 2 grid format.

Alex de Angelis (Octo Pramac MotoE) also crashed in Race 1, and the Sammarinese rider was happy to claim a P8 finish at his home race, with Alejandro Medina (Openbank Aspar Team) being forced to drop one position to P9 after exceeding track limits on the last lap. P10 went the way of Xavi Cardelus (Avintia Esponsorama Racing).

Maria Herrera (Openbank Aspar Team) finished P11, with 12th place Niki Tuuli (Avant Ajo MotoE) given a time penalty for exceeding track limits. Rookie Jakub Kornfeil (WithU Motorsport) was able to finish P13 and take some points, ahead of an unfortunate Xavier Simeon (LCR E-Team). The Belgian’s title hopes took a huge dent as he was forced to start from pitlane due to a technical issue before the race start.

After his huge crash in Race 1, Lukas Tulovic (Tech3 E-Racing) somehow managed to finish Race 2 in P15, with Aegerter taking the flag in P16 after his unfortunate crash.

Another dramatic MotoE™ race ends with Ferrari now sitting at the top of the standings heading into the final round and another double-header. Ferrari, Aegerter, Torres and Casadei are split by just 15 points heading to France… so bring on Le Mans as we get set to crown the second-ever MotoE™ World Cup winner!