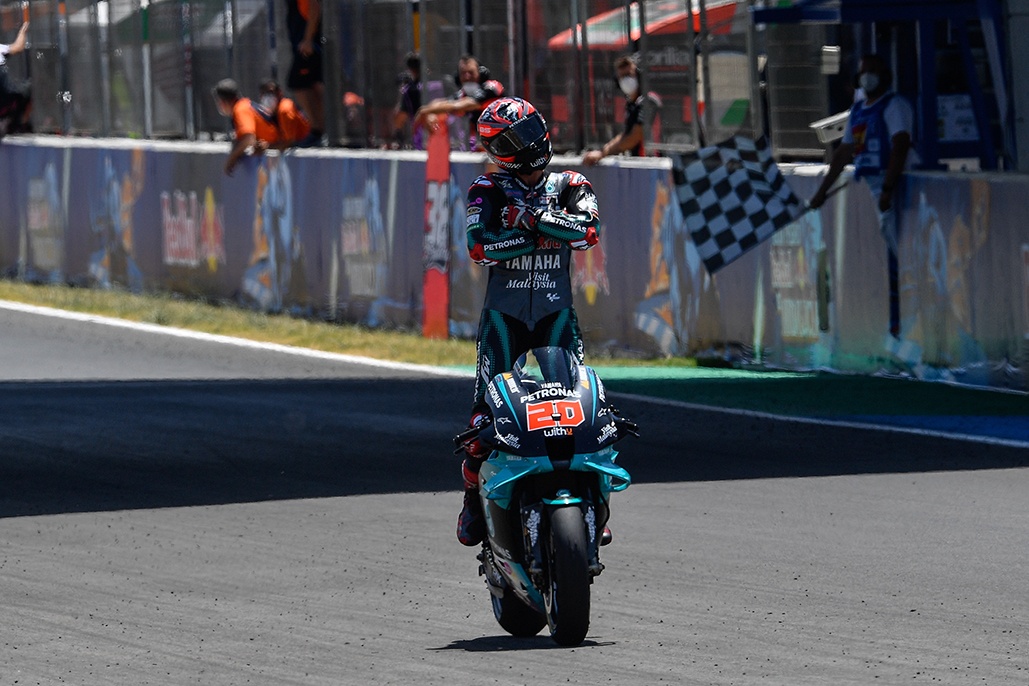 How do you solve a ‘problem’ like Quartararo? No one was quite sure in Jerez but add a new track, a dash of Marquez and stir…

It’s been quite the start to the 2020 premier class season and a clean sweep for Fabio Quartararo (Petronas Yamaha SRT) so far, with the Frenchman on a maximum of 50/50 as we return to race in the Monster Energy Grand Prix České republiky. His two races in Jerez were pitch perfect and within tenths of each other, his gap at the front comfortable – at least in terms of margin – and he’s most definitely the man to beat as we arrive at Brno. The man who held that moniker on the way into Jerez, however, will now be back.

A broken humerus in a dramatic Spanish GP put paid to Marc Marquez’ (Repsol Honda Team) first two chances to score points in 2020, despite a superhuman effort in a couple of sessions in the Andalucia GP to come back and fight for some. But two weeks on, Marquez’ impressive ability to even ride the bike at a competitive level just days after surgery say the reigning Champion may well be managing more than that in Czechia. What can he do now? And what will he be aiming to do?

It’s likely unrealistic – although many have been wrong before – to expect Marquez to fight for the win just yet, but it’s most definitely realistic to start looking at the long game. The season remains extensive despite the delays and cancellations obliged by the Covid-19 pandemic and there’s definitely time. The question just remains as to whose side it’s on.

Looking at the last few Czech GPs, the man third overall – Dovizioso – should allow himself a spring in his step on the return to Brno. A win in 2018 and second place last year speak well of his chances, and something that may well be crucial to the likes of ‘Undaunted Dovi’ is the familiar territory we’re returning to. Although everyone knows Jerez, no one knew Jerez in the 40 degree heat of July. Everyone knows Brno in August.

For Marquez on the comeback, this is good news too – as is the fact that Dovizioso leads the pencilled in expectations, because it was Yamaha who bit first in Jerez. Them fighting each other only buys the reigning Champion time, and Yamaha’s last win at the track came in 2015 as now-test rider Jorge Lorenzo put in a lights-to-flag special. On the one hand, five years seems a long time but on the other, it was four in Jerez since Valentino Rossi (Monster Energy Yamaha MotoGP) took Yamaha’s last win there… and Quartararo felled that with something that looked like ease, twice in a succession that was most definitely quick. Add that to the fact that five of the six places on the podiums in Jerez were filled by Iwata marque machinery, and Yamaha were 1-2-3 in the Brno test last year, which is the last time we were on track at the venue. Marquez had also expected them to threaten on race day in 2019, that’s why he said he pushed from the off. But then what about their engines used so far? And top speed deficit to some?

But enough about the top three and the number 93, as there are a good few more names in the hat in an astonishingly competitive 2020: Jack Miller (Pramac Racing) has serious speed and will want to unleash that after a crash last time out, and his teammate Francesco Bagnaia looked set for a first podium in the Andalucia GP too before seeing it snatched away by a technical problem. Franco Morbidelli (Petronas Yamaha SRT) suffered a similar story. Rossi was back on the box and knows a fair few things about Brno… and Takaaki Nakagami (LCR Honda Idemitsu) had a barnstormer of an Andalucia GP to keep the ‘Doctor’ honest, ending the race fourth overall in the standings to boot.

And what about KTM? The Austrian factory showed awesome speed in Jerez over both race weekends, and although there was some bad luck and trouble for them on Sunday, Pol Espargaro (Red Bull KTM Factory Racing) is fifth overall. And his rookie teammate, Brad Binder, had stunning pace. Miguel Oliveira (Red Bull KTM Tech 3) too. So what can they do in Brno? On the lead up to two home GPs back-to-back at the Red Bull Ring right after this one, they’ll want a few more points in Czechia – and to confirm their speed.

As Marquez returns, there are also two more riders suffering through the pain barrier, although both managed to finish the Andalucia GP. 2016 Czech GP winner Cal Crutchlow (LCR Honda Castrol), with more recovery time for his scaphoid, will want to be able to go the distance a little better, and Team Suzuki Ecstar’s Alex Rins, with a dislocated shoulder compounded by a small fracture, will be aiming to take a step forward too. The Spaniard took a hard-grafted tenth place last time out, but after Suzuki’s incredible preseason showing he’ll want to recover more ground and score as quickly as possible. The good news for the Hamamatsu Factory in the second race in Jerez though was Joan Mir, with the number 36 putting a crash in the season opener behind him to take fifth and get some reward for his speed. He’ll be even more keen to conquer Brno too, as the Czech track was the scene of his huge crash in testing last season that sidelined him for two races.

Finally, there’s also the fight for Rookie of the Year to keep an eye on. Quartararo has Independent Team rider standings sewn up so far, but the Rookie fight is closer than the points would have us believe. Alex Marquez (Repsol Honda Team) put in an impressive ride to eighth in the Andalucia GP and has avoided mistakes on race day, but Brad Binder – he of the aforementioned stunning pace – will be looking to fight back after losing out on a bigger points haul, and Iker Lecuona (Red Bull KTM Tech 3) will want in. Brno is a good track for Alex Marquez though, so the Spaniard will be keen to keep that nice nine-point cushion accrued on home turf…

Fast, undulating corners cut through the forested hillsides the Automotodrom Brno calls home, and they are ready to host the FIM MotoGP™ World Championship. Tune in for the first of a triple-header blockbuster of race weekends as we head east from Jerez to the hills of Moravia. Can Marquez start to play catch up? Or have the likes of Quartararo already bolted?

And remember… there are now 12 premier class races left in 2020, with another Grand Prix in Europe just added.