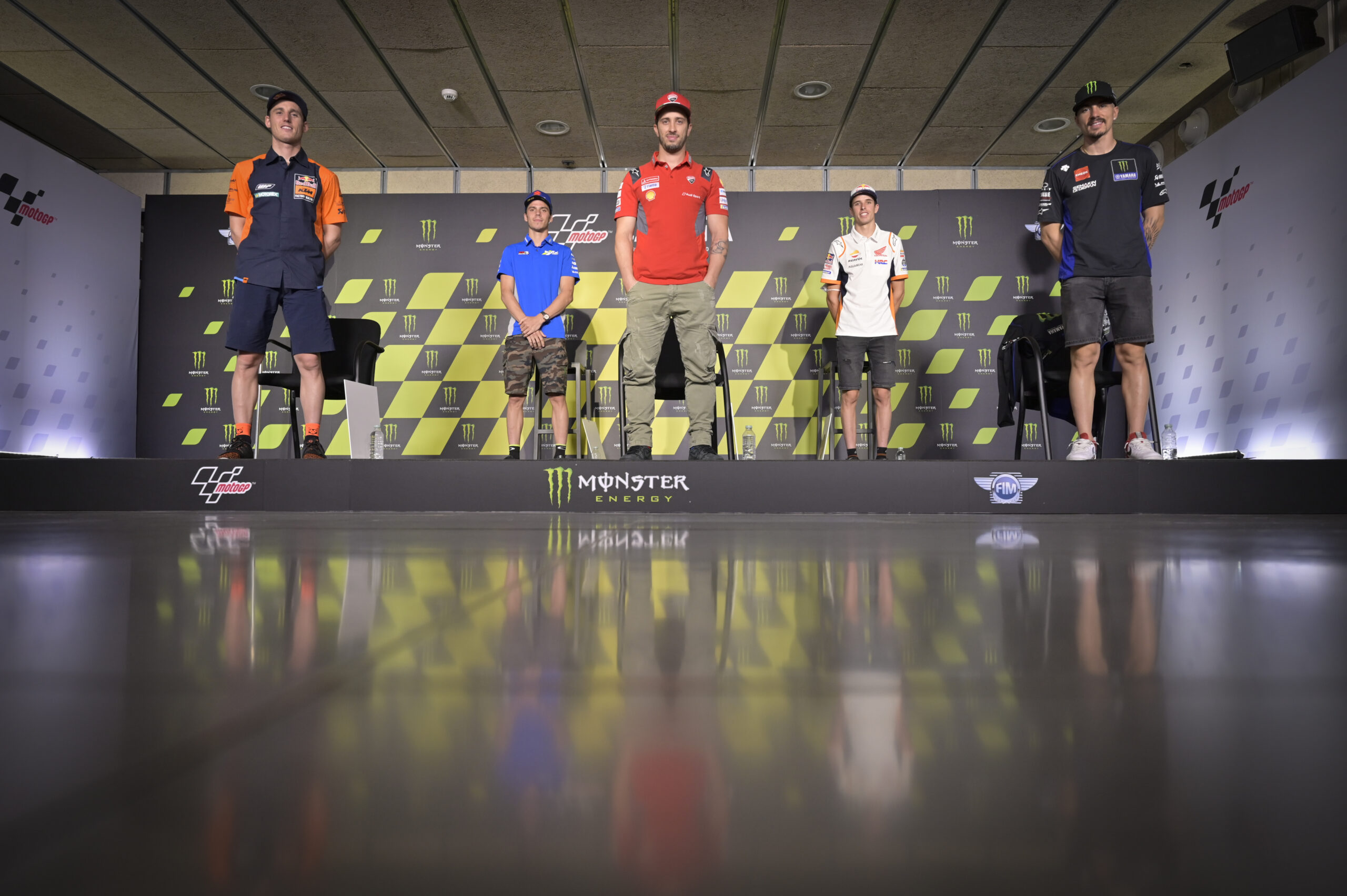 With a Championship so close there’s barely anything in it, there were a good few talking points ahead of the Gran Premi Monster Energy de Catalunya. Championship leader Andrea Dovizioso (Ducati Team) was joined by winner last time out Maverick Viñales (Monster Energy Yamaha MotoGP), fourth overall Joan Mir (Team Suzuki Ecstar), local hero Pol Espargaro (Red Bull KTM Factory Racing) and rookie Alex Marquez (Repsol Honda Team) to talk a little about the weekend gone and the weekend coming, with a lot to play for in Barcelona.

Here are the key quotes from those present, with Dovizioso up first on leading the way…

ANDREA DOVIZIOSO: “I’m very surprised but like everybody is, I think. Apart from Austria and Jerez 1, I’ve never been strong and fast like in the past. I’m surprised I’m leading the championship but it’s been a crazy championship because everybody is struggling. Every race, somebody struggles. This is the reason why the average score is very low. Nobody is very consistent or strong in every race. It looks like the season starts now, more or less. We are very close and unfortunately my feeling with the bike is not the best but I think what we have to change is clear from a few races but it’s very difficult for me to change that at the moment. I think its small things and small things can affect the final race result a lot. I don’t know if we can be competitive in Barcelona because the grip will be very different compared to Misano. I love this track so I think we can be competitive but on paper everybody looks really fast so I don’t know.

“In the way I brake in my career and especially in the last three seasons – it doesn’t work anymore. I’m not able to brake hard or brake in the way I want. I have to change that and I’m trying to change that but it’s not very instinctive, so it’s very difficult to make the perfect move and approach of the bike. But that effects everything. Still I’m not that good at that point and it’s clear that’s the point where I have to be better.”

MAVERICK VIÑALES: “I think that the Championship is still open until the last two races, we will try to be smart and try to be conscious. We will keep building and growing as we are doing. For us it is important the consistency. We will try to build up another good weekend and then we will jump to tracks I love like Le Mans, Aragon and Valencia. Montmelo is a track where we need to take out the maximum, it is a track I love to go so we will try to push very hard.

“I think our main priority is to start in the front row. The sooner you take the lead the better, because sometimes you struggle. For example the last race I was able to close the gap to Pecco but I don’t know if I was able to overtake. It’s always very hard with our bike to overtake, especially on the tracks where you don’t have two or three corners in a row to get a chance to overtake. We understand (the bike) very well, now we are focusing on the good points of the bike, in the last race I used it to overtake Jack Miller on the first lap, so I understand the bike well and think I’m riding on the point with the 2020 bike. It remains the same question, if you have a bad qualifying it is hard to gain room or pass the riders. We need to concentrate here in Montmelo in sector two or three to see where we can overtake and be sure we are strong.”

JOAN MIR: “This season it’s super important to be 100% focused on the consistency, it’s so important. I think that every one of us already knew that at the start of the season, but for some reason, we weren’t able to do it – I don’t know. Now it’s true we’ve found this consistency and I’m really happy for that. But you know, we found the consistency in the last four races, there are still a lot of races in front of us and it will be important to continue to be as competitive as we are now, here in Barcelona can be a good chance to continue doing that.

“In the last race I was able to study a little bit the Yamaha of Fabio, also Pol and a couple of bikes because every one of us were really close talking about race pace. In that situation you can see what areas you are better and where you’re not. I could see at the end of the race the lines to what Fabio was doing were really, really similar to mine. Looks like the Yamaha and Suzuki are quite similar. Then I was able to see also the KTM – completely different lines, going in with brakes, braking a bit harder probably and well, more like the Ducati. In Misano I was able to see those bikes a bit more. I think we have a great package, ok we have some point where the bike doesn’t work well, like everyone for sure has problems that the bike struggles in some areas. We have a bike that is really balanced at the moment.”

POL ESPARGARO: “We are not too many points off the leader. Now is the moment when you are angry when the points are gone because of some stupid crashes in the past! Already we need to look forward, we are just at the beginning of this new championship, that is going to be the second part of the season. This race in Barcelona for sure is not one of our best, it is one of the tracks on the calendar where KTM have struggled in the past few years a lot. But you know everything has changed this year, the performance of the bike is much better, the tyres fit better than in the past and the bike performs better, so why not, we can perform similar to the Czech Republic, a track where we struggled in the past but had a great result.

“From the beginning we got some good strong points like braking into the corner. We brake very deep and still we are powering that part of the bike, every year it’s a little bit better which is nice. We just got this year some more stability and traction from the bottom which allows us to brake even later and stop the bike inside and make this big corner, which I really love to ride like that. I’ve been riding with Fabio and Joan the last race for sure, the last laps of the race with the soft tyre was completely used, it was destroyed, so I couldn’t really do a lot but even with that I was able to defend the position from Fabio. I knew that if I could kill their corner speed they are in a bad situation, I was just braking deep and using the strong points of the KTM and then using the power to go out of the corners, which we also improved the revs this year, so the bike is super powerful. You need to know your advantages, what you can use against the others and if you know who is behind you just be clever to block them.”

ALEX MARQUEZ: “The season has been a little bit hard for us that’s for sure. The Misano test was really good for us, it’s the first test since the Qatar Test in preseason so for a rookie it’s always important to be on the bike, to get a lot of kilometers, to get the pace because in a normal GP it’s always difficult to try new things on the bike and make good progress. Like everyone said, the championship is a little bit crazy, so we need to take profit in some races. At the moment we need a lot of hunger to do it, especially on qualifying because on pace we aren’t bad in many races. Apart from that we need to make progress, first of all make top 10s in more tracks and from that, we need to keep going and keep improving day by day.

“In the end for sure we are working and we trying to improve, but the Honda has the potential that only you need to know. Where you take that potential, how to manage that potential and it’s a bike where it’s really difficult to take all the profit from the bike. So for sure all bikes have weak points, Honda has a weak point like all manufacturers but I think in the end this year, with small changes, small details make the difference because all the bikes are working really good in a different way, in different points of the tracks but all the bikes are so competitive. The Honda has the potential, the only thing we need is to understand a bit more, to profit from the potential and I’m sure we can be fast from now until the end of the season.”