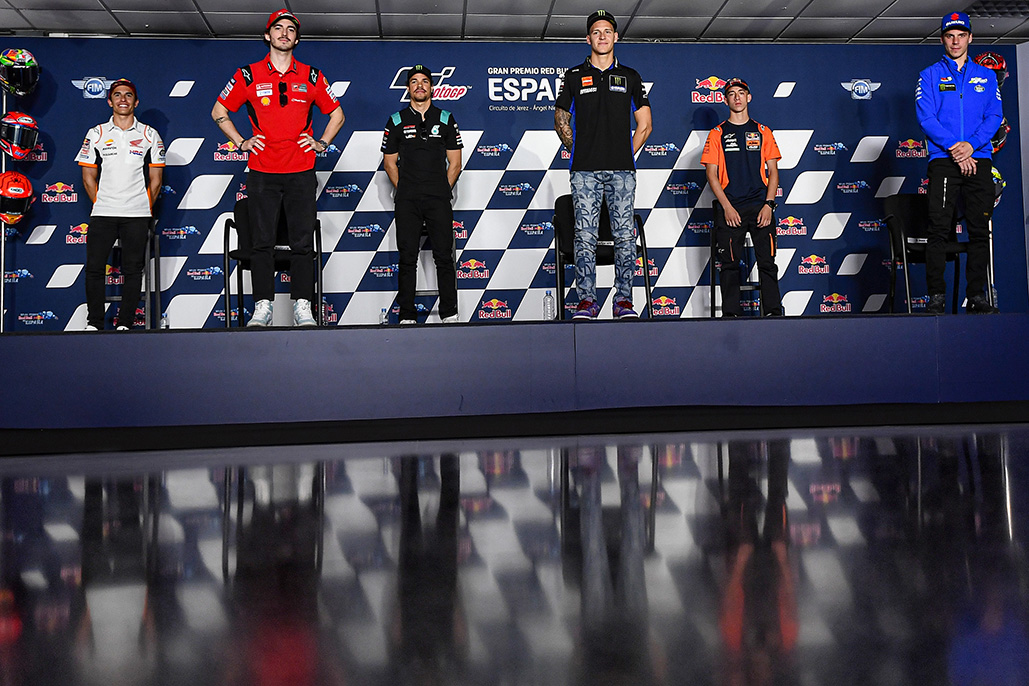 Fabio Quartararo: “I’m feeling pretty excited, first of all because I love this track but also because I’m feeling great on the bike and great with the team. I’m just thinking about, you know, working the same way as we did in Qatar and not thinking that last year I won both races here because I we saw Miguel win in Portimão last year and then have some struggles this year, so I just want to focus in working in the same way and be ready for Sunday. It means nothing that we won both races last year.

“I feel like the 2020 season helped me a lot because a lot of things happened. In 2019, everything was perfect and I enjoyed it a lot with seven podiums and six pole positions. 2020 was more up and down though. We started well but then we had some engine problems, some electronic problems and I lost my mind a little bit. Then we got it back but the end of the season was a total disaster and I feel like I’ve learned a lot. Staying calm is the most important for me because when I get little bit angry on the bike, my comments to the team are not clear. Being much calmer on the bike is working much better for me and the results at the first races show that, so I want to keep working like this. I know it’s not easy but I’m feeling great and I feel like we are going into the right direction so I’m happy.”

Francesco Bagnaia: “I’m really confident because at the moment I feel good with everything; my bike, my team. Last year I was competitive here, most of all in the second race, and I had just back luck for having the engine failure but we were strong. I think it can be a positive weekend for us and I think we can try to stay in the top three again.”

Has Pecco seen he has a big fan in former MotoGP™ rider Ben Spies, who says his riding style is something that gets the best out of the Ducati?
“I’ve seen the tweet from Ben, it’s always nice to see past riders say something about us and I really appreciate it. Already last year I started to try to ride the Ducati in a different way, and I understand better now how to do it. Last year in the second part of the season I was struggling a lot and it was difficult to accept it and understand what was happening. But then in preseason testing, I started to have the same feeling again and maybe all the work we’ve done this winter with training and in the gym with the others from the Academy has given me extra motivation and confidence. In the first race in Qatar I was trying to manage the tyres but I learned from that race I had to use the tyre in a different way. In the second race I was faster than the first but made mistakes and lost the opportunity to win. In Portimão I was very confident with the bike and felt great on everything, we know our potential is great in acceleration and braking and I tried to concentrate more on that area, and the bike, if you push, is turning well. It’s strange but something that with our bike is working well.”

Joan Mir: “Last year was a difficult start to the season here. It’s true that the heat of last year made it pretty difficult for everyone and it looks like this year it will be colder. This is something that can be good for us. Everyone knows this track really well and it’s always really difficult to make a difference but well we will try to do our best with the package that we have. Our goal is to finish on the podium, to fight for the podium and then we will see. It’s true that last year here was not really good but also Portimão was not too good and I was able to make a good result, so I will try to do my best.”

Franco Morbidelli: “Portimão felt great, I felt amazing getting back to some top spots and positions, and it felt just great to do the race I did. I had a good fight in the beginning and then tried to maintain the most consistent pace I could throughout the whole race so it was nice. Here, we have good trust in this track. Last year I was close to the podium in both races, and unfortunately for two different reasons I didn’t manage to get it in either but we’ll see. I’ll try to do my best this weekend, try to keep the momentum that I hope started in Portimão, and we’ll see.”

Is his mental, more philosophical approach key to overcoming tougher times?
“It’s the story of my life trying to overcome difficult times. It’s happened in the past and it will happen in the future, and I hope to be hard enough and ready enough to overcome the difficult moments I will face.”

Marc Marquez: “Portimão was a special weekend but here I feel like everything is a bit quieter and this is important, it feels like a normal weekend. It’s not like my physical condition are completely different, they are very similar, but I hope to ride in a better way from FP1 and my target is to hopefully be more stable with my physical condition during all the weekend.

“I have good and bad memories here, of course, but better memories than worse memories, so this will be important. There’s no target, no clear target, just ride the bike, have more kilometres, try to feel better the position of the bike. We know where our limit is now and it’s not with the bike or the tyres, it’s more about me. We know where the limit is and we know where we need to improve but we need time, days and kilometres on the bike.”

Pedro Acosta: “I feel incredible, after a good preseason, we knew we could do good results but nothing like this finally when you come to the world championship, you don’t think about winning races in the first part of the year or something like this. We have to keep working.

“A few minutes ago I was nervous, but if I am here it’s because we’re working well.”

Mir and Marquez were also asked about the rookie’s incredible performances so far:

Mir on Acosta: “I imagine how he feels, I remember the first time I was in a Press Conference I was really nervous I think he’s the same! Pedro is doing a really good job, during the last year in the Rookies Cup I went there to see him and wish him good luck in a couple of races because one of my mechanics Fernando is a neighbour of Pedro and Fernando spoke a couple of times about him and that he’s fast. He was right! I think he’s doing a great job, I think he has a bright future in front of him. He rides in a really good way and he’s showing that even if he’s a rookie, he’s the main contender this year.”

Marquez on Acosta: “I already spoke with him before and his riding style is good, his talent is good, he’s fast and this is obvious from the results! Being here in the Press Conference between MotoGP riders at 16 years old… I think it’s difficult to deal with because it’s maybe too much pressure but as I said to him: forget about everything, enjoy it now, you’re a young talented kid. If he wins on Sunday it will be ok, if he finishes top five or top ten, it will be ok. It’s his first year! Now is the time to enjoy it is my advice to him, he’ll have time to put pressure on himself and apart from that, also congrats because he’s riding amazingly and he will arrive soon! I’ll try to be there but he’ll arrive soon competing with us!”