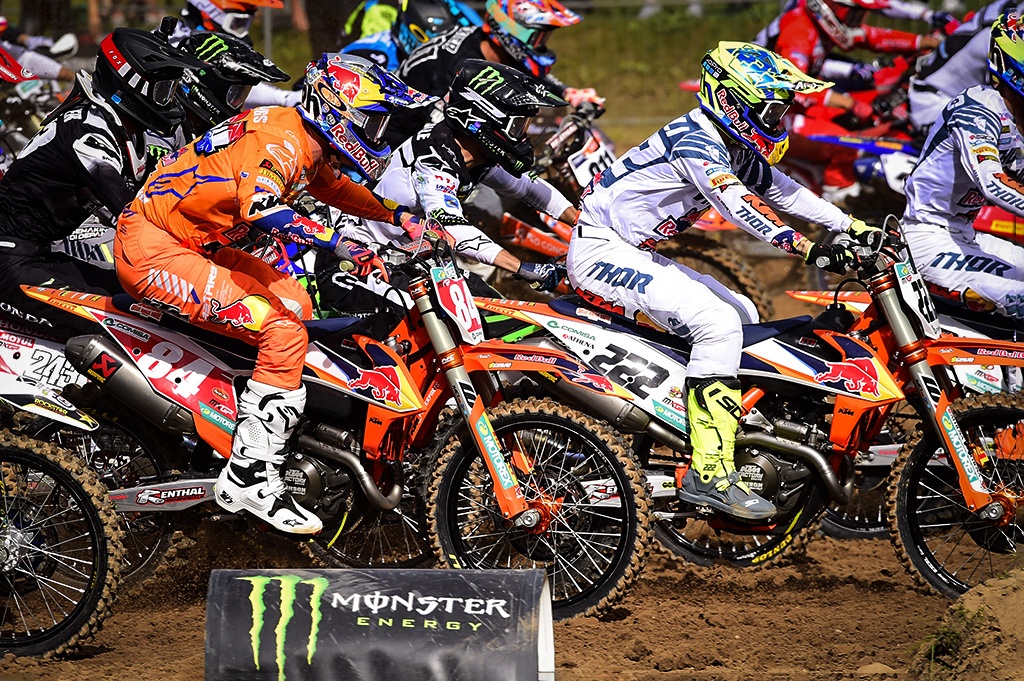 Final preparations are going down in Latvia as the FIM Motocross World Championship prepares for its third and final Latvian race, the MXGP of Kegums!

The previous two events in Kegums have been nothing short of exceptional, with fans being treated to a front-row seat to some amazing showdown’s across both the MXGP and MX2 classes, which has really gone to show how strong the FIM Motocross World Championship is this season.

With two epic races already in the books, now it’s time to look forward to the final one, and without a doubt the MXGP of Kegums will deliver nothing less.

The EMX250 riders will take to the track first on Saturday for their races and the series leader Thibault Benistant of Hutten Metaal Yamaha will be looking to repeat his perfect score from the previous round, as he chases another podium. Meanwhile Isak Gifting will be looking to put a serious challenge for race wins and the podium, having finished three times on the podium this season so far.

In EMX Open, Karel Kutsar will be looking to carry his momentum from the previous round and to keep hold of the championship lead, while Toms Macuks of Rodeo Racing Team will be hoping to make a strong comeback after an unlucky race on Wednesday.

With his 90th career Grand Prix victory sealed at the MXGP of Riga, Antonio Cairoli of Red Bull KTM Factory Racing will come into the weekend with a confident outlook, knowing that even with his knee injury still giving bother he is able to run up front and fend off the other top guys in the class.

Though as Cairoli continues his comeback after a tough 2019 season, fellow Red Bull KTM Factory Racing rider Jeffrey Herlings is without a doubt more hungry than ever to get himself back on the top step of the podium. After a tough GP at the first Latvian event, things started to look up for the Dutchman on Wednesday, though with a silly mistake in the second MXGP race, once again Herlings didn’t get the end he would have wanted.

Though knowing that he is more than capable of running out front, this next GP will only be a case of whether he can stay out of trouble and keep it on two wheels and if things go his way, then this weekend could see the bullet back on top for real.

Though it won’t be as easy as it sounds. The MXGP class is truly stacked this season with serious contenders that are all hungry for race wins and podiums. One of those being the Monster Energy Yamaha Factory MXGP rider Jeremy Seewer.

Seewer has had a good run so far in Latvia and has been pushing hard. He has come close to a race win during the last two GP’s, take for example as he challenged Glenn Coldenhoff from Standing Construct GasGas MXGP for the win in race two at the MXGP of Latvia, and then when he chased down Rockstar Energy Husqvarna Factory Racing’s Arminas Jasikonis in MXGP race two on Wednesday. It seems like for Seewer it’s a case of getting out of the gate in front, if he can do that, he clearly has the speed and ability to win a race in Latvia, it’s only a matter of time.

Having won his first career GP race this week, Arminas Jasikonis will without a doubt be hungry for racing, and even more keen for a podium. Jasikonis has showed serious speed around the Kegums circuit, having clocked the fastest lap time in time practice on Wednesday, he was also flying in race one as he made a comeback from last to eight position. And then of course race two, that saw him battle with multi-time world champions, Cairoli and Herlings. The only thing Jasikonis needs is a good clean start and he’ll be away.

Team HRC’s Tim Gajser has not had the best of times here in Latvia so far. He won the opening race at the MXGP of Latvia, but since then things haven’t been going too well for the defending world champion. He’s been caught up in plenty of drama, including some big crashes of his own, which just could be a case of him wanting the win too much, thus pushing too hard.

Gajser is now 28 points down on Herlings and having scored no points in the first race at the MXGP of Riga, picking up a decent amount of points this weekend for the MXGP of Kegums will be important if he wants to avoid letting Herlings run away with it.

Romain Febvre and Clement Desalle of Monster Energy Kawasaki Racing are another two riders who have been looking good in Kegums so far. Febvre claimed his first podium of the year last weekend, and during the week finished in P2 in the opening MXGP race. With the competition so high this season, like for any of the riders, all he needs is a good start to challenge for the win and a podium spot.

Looking for a much better weekend will be the MXGP of Latvia winner, Glenn Coldenhoff of Standing Construct GasGas MXGP, who had an unfortunate race on Wednesday. He was however strong in the previous round, going 2-1 and claiming the first GP win for GasGas, so this weekend he could go after his second. Meanwhile his team-mate Ivo Monticelli had a good two races on Wednesday with a 11-7 result and went on to claim his first FOX Holeshot of the season. If he can get out of the gate again like he did in race 2, he could aim for higher positions in the top 5.

In MX2, predicting a winner is also no easy task. There is no doubt that after a successful previous GP, Monster Energy Yamaha Factory MX2 rider Jago Geerts will be back for more this weekend. He didn’t have the best of luck at the MXGP of Latvia, but really managed to turn thing around for the MXGP of Riga as he walked away with 2 race wins, a FOX Holeshot and an overall victory.

He is still 8 points down on Red Bull KTM Factory Racing’s Tom Vialle, so it will be interesting to see what the weekend has in store, and whether or not he will be able to repeat his luck from Wednesday, this Sunday.

Meanwhile, Vialle didn’t end his race day on Wednesday where he may have expected. Having struggled with his suspension set-up throughout the day, he still managed to get out of the gate well, though as the races progressed the struggle was evident as he dropped off a few positions.

With a couple of days between the races, there is time for him to make some changes and hopefully come back strong for the final GP in Latvia.

A real threat this weekend are the two F&H Kawasaki Racing talents Roan Van de Moosdijk and Mathys Boisrame who will be going for their podium on the bounce! Both riders have been looking incredible on track and have really taken well to the hard sand of Kegums. Both riders have been pushing hard and have come close to the lead, so could this weekend be when one of the two finally gets a win?

Maxime Renaux of SM Action MC Migliori – J1 Racing is another rider who could do great at the final Latvian GP. He’s been having some good battles in the mid-field and is edging close to the top 3. So is Ruben Fernandez of SDM Corse Race Team who last weekend was the fastest MX2 rider of the day, plus had a strong ride in race 1 to finish 3rd. He was also only 4 points off the podium as well, so we could see him run in the top 5 again this weekend.

Ben Watson of Monster Energy Yamaha Factory Racing who has shown a glimpse of what he can do on the hard sand here in Kegums. At the MXGP of Latvia he had a solid result of 5-6, though on Wednesday things didn’t go so great. The first race he was forced to DNF due to a technical issue and then in the second race managed a 9th. Despite that, he will be looking to finish the triple-header strong, as he aims for better results this weekend.