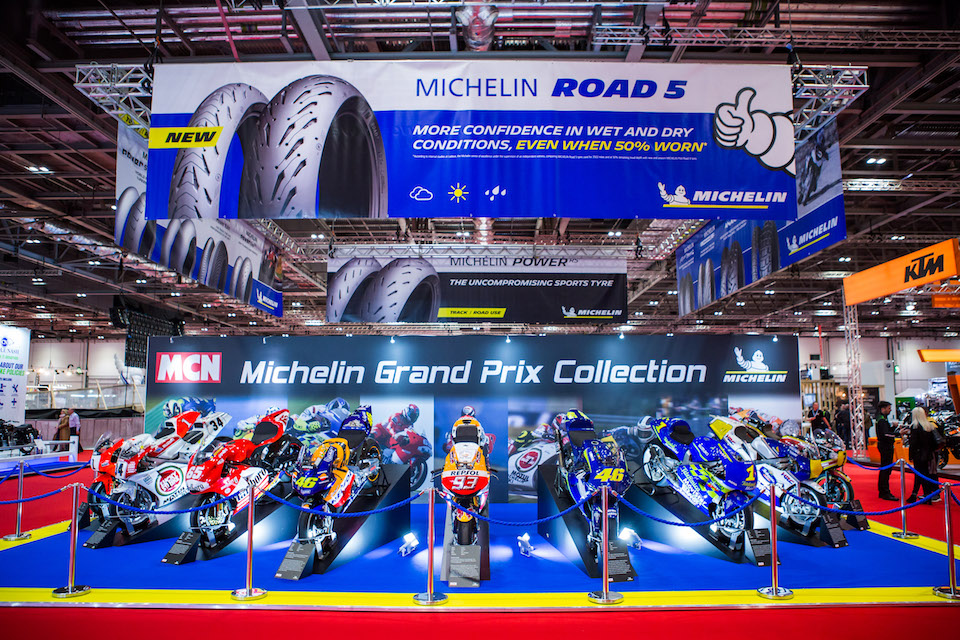 Thousands of motorcycle fans flocked to the ExCeL centre in London’s Dockland area today as the 2018 Carole Nash MCN London Motorcycle Show got underway. Greeting fans immediately as they passed through the entrance was the Michelin Grand Prix Icons Paddock, featuring nine of the most iconic machines in MotoGP history, including title-winning bikes from the likes of Valentino Rossi, Marc Marquez and Kevin Schwantz.

Commenting on the event, Rebecca Donohue, Head of Marketing at Carole Nash, said: “What a great opening day! The turnout was brilliant and all of the stands, including our own, were packed full of visitors, which is always good to see – particularly as show sponsors. As ever, it’s great to get the opportunity to talk to our customers face-to-face.”

23-time Isle of Man TT winner John McGuinness gave fans a place away from the hustle and bustle with his own pub, where the Road Racing legend kept them entertained by pulling pints and telling tales from his incredible career.

Taking over the centre of the show, the all-new Michelin Thunderdrome proved a huge success as visitors made the most of the free display and see the likes of Carl Fogarty, Neil Hodgson, Chris Walker and James Whitham go head-to-head with the young guns of Richard Cooper, Lee Jackson and Tom and Tim Neave around the special boardtrack inspired course. Race fans had plenty to keep them entertained elsewhere as six teams from the British Superbike Championship used the event to unveil their 2018 liveries. Buildbase Suzuki kicked off the day, followed by OMG Suzuki, FS-3 Racing Kawasaki, McAMS Yamaha, Tyco BMW and JG Speedfit Kawasaki.

The Adventure Village was also a hive of activity, with famous faces such as Nick Sanders and Elspeth Beard, the first UK woman to ride around the world, taking to the stage. To celebrate the 100th anniversary of the Royal Air Force, a team of motorcyclists launched Round the Outside – a 4,200 mile, 3 week ride around the coastline of Great Britain to raise money for the RAF Benevolent Fund.
Jimmy Aird, Owner of Scott Leathers “It’s been an excellent opening day, probably the best we’ve ever experienced at the show. We may be the only ‘made to measure’ leather brands here so obviously people are looking for something different. There’s been a big crowd in for a Friday for sure, it’s been unbelievable really.”

Visitors to the show were also able to take advantage of a range of ‘biking bargains’ with over 180 exhibitors showcasing their latest products.

Royal Enfield writes a new chapter to their 120 year history

Quantum leap in sound for Sena