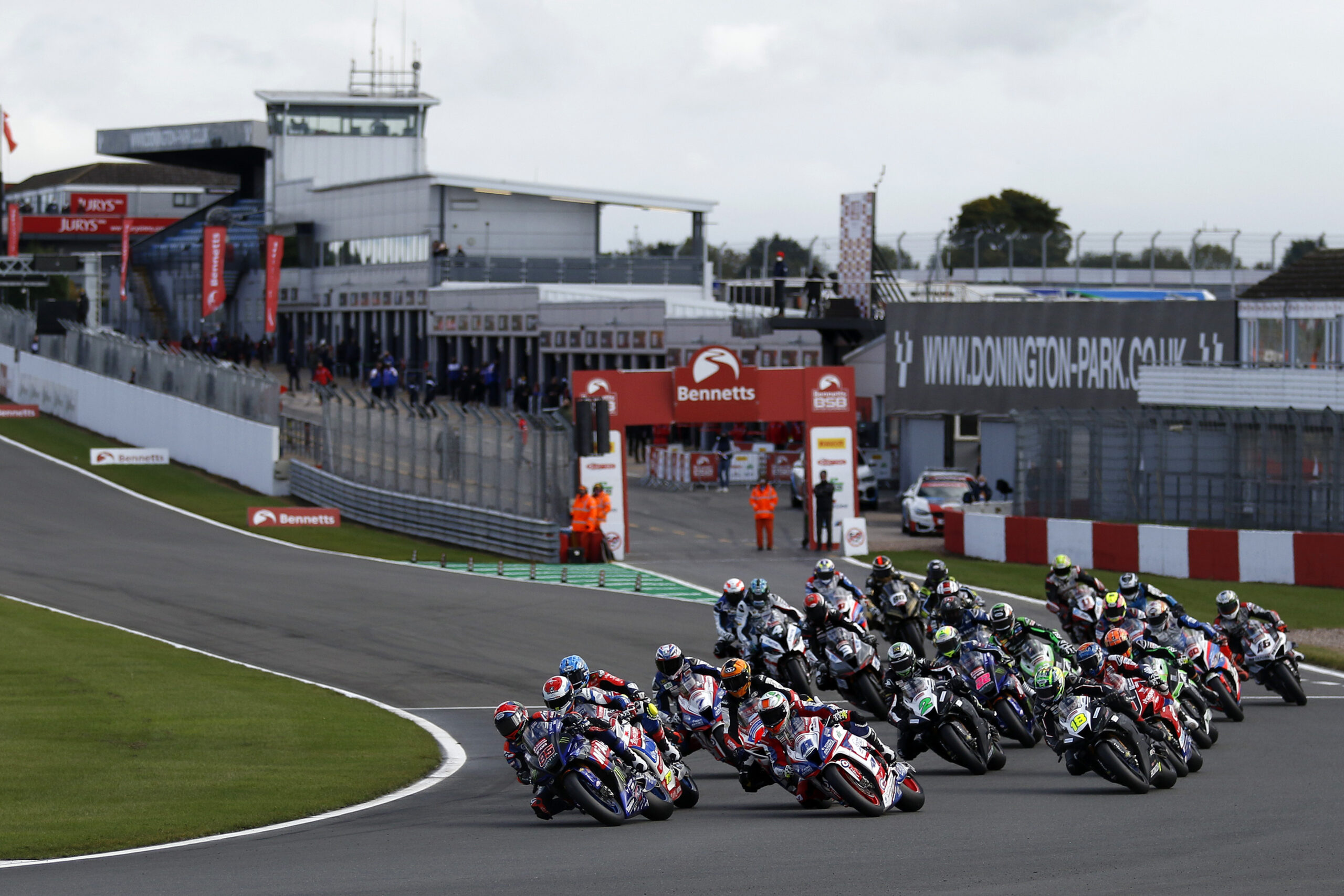 Three different riders and three different teams celebrated victory at Donington Park in the penultimate event in the 2020 Bennetts British Superbike Championship battle, with five riders mathematically in with a fight for the title at the Brands Hatch season finale (October 16/17/18).

Josh Brookes leads the standings by 16-points ahead of the triple-header decider at Brands Hatch, but despite being crowned the Monster Energy King of Donington today (Sunday), the Australian claimed one race victory with growing competition from his opposition.

In the opening race of the weekend, Andrew Irwin returned to the form that saw him claim a double victory at the circuit’s season opener, and the Honda Racing rider delivered a perfect race to score his first podium since the last visit to Donington Park.

Andrew Irwin’s victory was all the more important for Honda Racing after championship leader Glenn Irwin crashed out unhurt on the opening lap, and then had to regroup and rebound strongly in the next two rounds to avoid losing ground before the season finale.

The VisionTrack Ducati teammates completed the podium line up in the opening race, with Christian Iddon holding off Brookes to have another strong podium-finishing performance ahead of Tarran Mackenzie and Ryan Vickers, who celebrated his best finish for RAF Regular & Reserve Kawasaki.

It wasn’t to be another Donington Park double for Andrew Irwin though; when he crashed out with Ryan Vickers on the opening lap of the second race. At the front, Kyle Ryde had initially held the advantage, but a technical problem forced him out of the action.

Brookes had gathered pace and the VisionTrack Ducati rider edged out a lead, however it did begin to get closed down by O’Halloran in the closing stages but not enough to deny him the victory.

The McAMS Yamaha team celebrated a double podium finish in the second race as Mackenzie snatched third place from Gino Rea, who was another rider to claim his best result of the season today at Donington Park.

The final race of the weekend began with Brookes getting the jump off the line, but the VisionTrack Ducati rider had to settle for third place after Mackenzie stole the show in the closing laps, making McAMS Yamaha the third different winning team of the day.

Mackenzie had been able to hold off the challenges from Glenn Irwin, who had an impressive performance to end his weekend with a podium finish, and the Honda Racing rider now holds third place in the standings and an 18-point deficit to Brookes.

Andrew Irwin (Honda Racing)
Bennetts BSB Round 13 race winner
“This weekend has been a little up and down, but we won another race again – it was something I needed to lift my spirits. In the second race unfortunately I got hit on the first lap and took out. It’s one of those things, I have been on both ends of it before, it’s racing and we will just move on from it.

“In race three it took me far too long to get going, I got a good start but kind of got beat up in the first turn, which upset my rhythm a bit. It then took me about four or five laps to get into it again but once I did we had quite good pace.

“I feel we should have been fighting for the podium, but we didn’t and I came seventh. However the Fireblade felt good and I’ve built some confidence going into Brands, I think we can do a good job, I’m looking forward it.”

Josh Brookes (VisionTrack Ducati)
Bennetts BSB Round 14 race winner
Championship leader
“I am kind of winning after today, even if it was a third place in the final race, as I am leading the championship and that is a nice way to leave Donington Park.

“The final race was tough, I was trying to control the race and I was pushing to try and get a gap, but it just stayed the same. I started to drop off from Taz and Glenn Irwin and then had a couple of moments with the front end.

“I didn’t give up on having another chance but in my mind I knew it was an important race to finish and that I couldn’t have any DNFs so they rode well and deserve their places. I have to be happy with that and to go into the final round with a lead is a great improvement on previous years so we need to work hard and what will be, will be.”

Tarran Mackenzie (McAMS Yamaha)
Bennetts BSB Round 14 race winner
“The first race was really nice today, coming through from 19th. It was a calculated gamble to go with the harder wet tyre as I knew the track would dry out and that would leave me with some tyre at the end of the race. The aim was to get a good lap for race two, which I did.

“I did not expect to get third in race two, I went in having only done five dry laps all weekend, so we bolted in the setting from Silverstone and I had the first few laps of the race to adapt to it! It was a tough race, I got knocked back to seventh or eighth and had to come back through so to get third I was really happy.

“I knew if I could get a better start in the last race I could maybe have something to show at the end, and that was the case. I didn’t get a good start but I made my way back through, when I got to Glenn I was quite comfortable sat behind him so I knew I could maybe put some time into him if I got past in the last few laps, which I did so I was really happy with that. I’ve always wanted to win in the superbike class so it was an epic feeling.

“It’s been a good day for the whole team, so we’re looking forward to getting to Brands Hatch in a couple of weeks.”