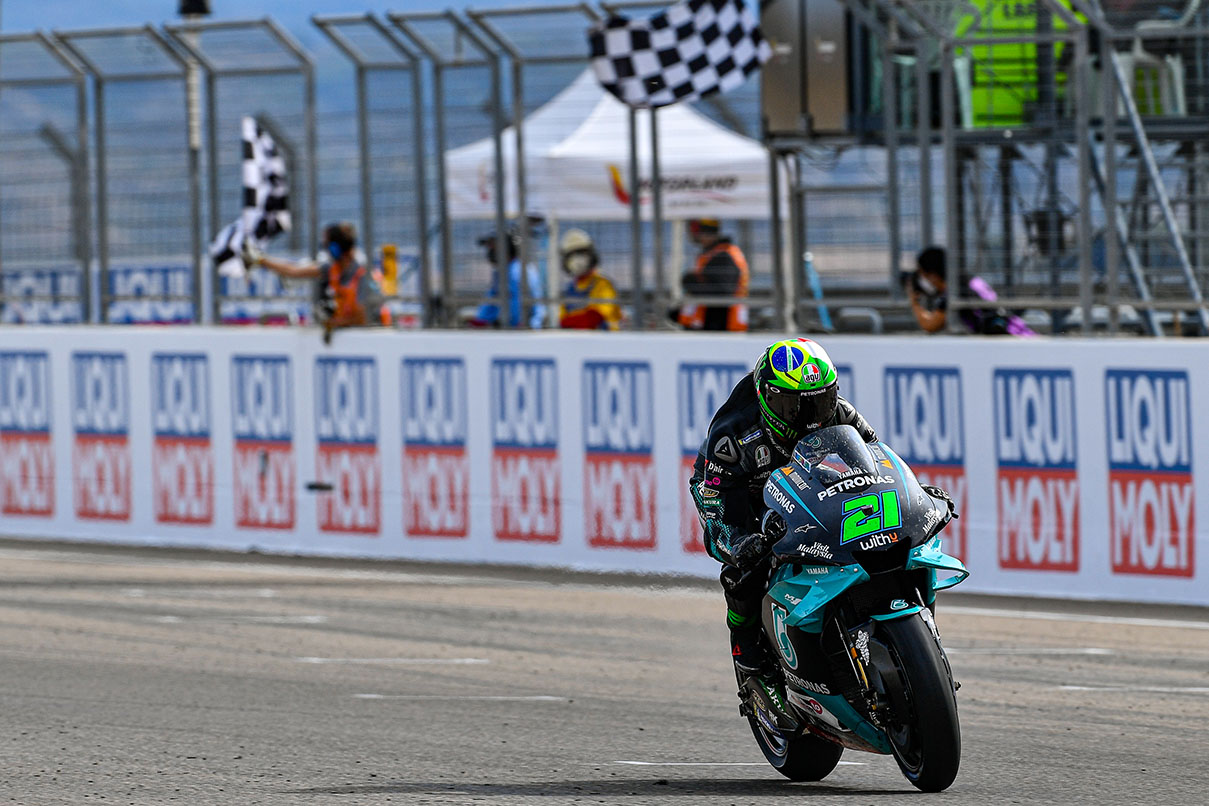 75 points remain on the table, Mir has an advantage of 14, and MotorLand put yet more names in the hat.

11 races ago, the MotoGP™ class of 2020 started with a clean slate. Several months, one double- and three triple-headers later and we’re heading into the final three-race stint with just a 14-point advantage for the Championship leader, eight different winners, 15 podium finishers and six riders in with a very real shot at the crown. And the man in the lead hasn’t even won yet!

As we arrive at the Circuit Ricardo Tormo, the man seeking that first MotoGP™ win despite his seat at the head of the table is Joan Mir (Team Suzuki Ecstar). The Mayorcan has been the king of consistency in a chaotic year of changing fortunes, putting him 14 points clear – and he’s now focusing on the long game as well as bagging that very first premier class win. If he does it in the Gran Premio de Europa – and the track should suit Suzuki – he’ll make 2020 match the all-time record of different winners set in 2016. If he doesn’t he may well still increase his overall advantage, such is Mir’s metronomic ability to end up on the rostrum.

The first man wanting to make sure Mir’s time at the top comes to an end is Fabio Quartararo (Petronas Yamaha SRT). His time as the season’s only repeat winner came to an end last time out, but the Frenchman has won three and arrives back at a track that should suit Yamaha to a T. Can he turn around some tougher races and stamp some authority back on Sundays? 14 points doesn’t yet need everyone behind Mir to go out guns blazing, but a trip back to the top step would reignite Quartararo’s momentum – as it would for Maverick Viñales (Monster Energy Yamaha MotoGP). Viñales gained points back on Quartararo in both races at MotorLand and remains well in the hunt, he just didn’t gain any on Mir.

Speaking of momentum and gaining points, it’s time to talk about Franco Morbidelli (Petronas Yamaha SRT). The Italian joined his teammate as a repeat winner this season in the Teruel GP, and he did it just as he did for his first win: with a masterclass in domination. That puts him fourth overall and within 25 points of the top, and he knows it. Full attack mode is engaged on Morbidelli’s side of the garage as he makes a late charge for the crown, not having needed to manage any real pressure… until now. Even then, it’s a little less than those who’ve been under the microscope for some time.

That’s also true of Alex Rins (Team Suzuki Ecstar). His is a longer shot than Morbidelli’s at 32 points off the top, but stranger things have happened. The Spaniard put in a stunner of a performance in the Aragon GP to become the eighth different winner of the season, and he followed it up with another podium. Crucially, he also had the measure of teammate Mir for the first time in some time, which he’ll need to keep if he’s to make an assault on the crown. Valencia should suit Suzuki which is good news for both, but will the number 36 turn the tables? Or is Rins’ ace card actually the fact that he has no choice but to attack?

Ahead of Rins, however, remains Andrea Dovizioso (Ducati Team). It hasn’t been an easy run of late but the Italian keeps taking points, gaining in a few races until a more difficult second outing at MotorLand. Never having had the best run at Valencia, Dovi likely needs a few stars to align to start clawing back ground from the top step now, added to the fact that most of the Ducatis suffered at Aragon and the turnaround doesn’t yet seem imminent. But that time Dovizioso did win in the premier class at the Circuit Ricardo Tormo was not that long ago, and it was a signature stunner in the rain. Now that really could make things interesting… and it is November, after all.

And then there are the – many – others who’ve made a habit of going fast lately. Takaaki Nakagami (LCR Honda Idemitsu) will be first in line for a redemptive ride after taking an awesome pole position in the Teruel GP and then crashing out early, ensuring no rider has no scored in all races. Alex Marquez (Repsol Honda Team) also crashed out to bring his recent roll to an end and will want to bounce back, although Rookie of the Year remains tied on 67 points apiece between the Spaniard and Brno winner Brad Binder (Red Bull KTM Factory Racing) after the South African also crashed out in Teruel. He took Jack Miller (Pramac Racing) with him, who’ll want some much improved luck too…

Pol Espargaro (Red Bull KTM Factory Racing), meanwhile, put in another impressive weekend last time out and will want to replicate and more, and Miguel Oliveira (Red Bull KTM Tech 3) wasn’t far off. Johann Zarco (Esponsorama Racing) split the two in Teruel and saved some serious face after a tougher weekend for other Borgo Panigale machines as well, so he could at the very least complicate life at the front and in the points.

Can Cal Crutchlow (LCR Honda Castrol) continue to fight through the pain barrier? What can Aleix Espargaro (Aprilia Racing Team Gresini) do and how will new teammate Lorenzo Savadori settle in? And will future, current and all-time legend Valentino Rossi (Monster Energy Yamaha MotoGP) be back on track?

Three races, six contenders, one crown… and it all comes down to the final triple-header. Tune in for the Gran Premio de Europa at 14:00 (GMT +1) on Sunday to see who strikes next in the rollercoaster 2020 season!