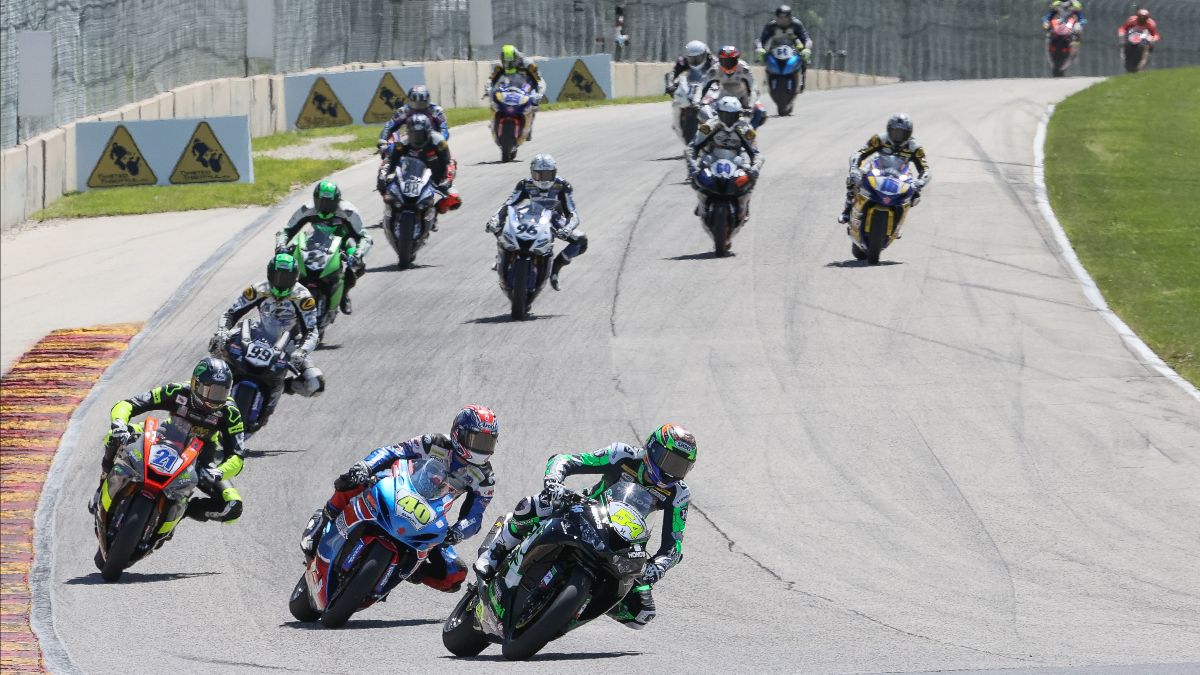 It was a weekend of doubles at Road America in the opening round of the 2020 MotoAmerica Series with Richie Escalante, Kaleb De Keyrel, and Dominic Doyle winning both races in their respective classes.

In Sunday’s Supersport race two, HONOS Kawasaki’s Richie Escalante absolutely dominated the field to take his second race victory of the weekend, the Mexican rider winning by nearly eight seconds at the checkers. Brandon Paasch finished second in the race, but his Celtic HSBK Racing Yamaha was found to be underweight in the post-race inspection, and he was disqualified. That moved M4 ECSTAR Suzuki’s Sean Dylan Kelly up to second, and RiderzLaw Aguilar Racing’s Jason Aguilar moved up to third.

“I’m really happy,” said Escalante. “It’s my first time to double win in the MotoAmerica Championship, so I am really happy about that. In the race, I did not start very well again. Then I had a mistake in turn six. I lost the brake point and almost crashed. The ZX-6R Kawasaki is amazing. I’m very happy. My team is working really good. I’m very comfortable right now, so I’m ready for Road America two next month.”

In Twins Cup, which was the first race of the day, 1833CJKNOWS Yamaha rider Kaleb De Keyrel and American Racing/SportbikeTrackGear.com Suzuki’s Rocco Landers had another battle as they did in Saturday’s race. But on Sunday, Robem Engineering Suzuki rider Jackson Blackmon also joined the eight-lap fray. The three riders stuck together in a tight pack at the front, and in the end, De Keyrel took the checkers by .081 of a second for his second victory of the weekend. Landers and Blackmon crossed the stripe in a photo finish, with Blackmon nipping Landers for second place by .001 of a second.

“I helped myself out quite a bit today with getting a way better start,” De Keyrel said. “I think at one point yesterday I was back in fourth or fifth. So, I definitely knew today that Rocco was going to try and do the same thing and get a gap because obviously at Road America you get that gap and then everybody else is pulling you backwards and that guy out front is running away with it. So, I knew I had to try to be that guy as much as I possibly could. I definitely focused on the start. It was such a weird race because I was faster than Rocco in some sections, and he was faster than me in others. So, we were kind of yo-yoing throughout the lap. It was just an interesting race. I had a blast out there. I love racing with MotoAmerica. It’s always a great time. I’m just really thankful to be out here racing and having fun.”

Liqui Moly Junior Cup: Doyle By The Skin Of His Teeth

The Liqui Moly Junior Cup class joined Superbike and Supersport in also having a double race winner at Road America as BARTCON Racing Kawasaki’s Dominic Doyle prevailed again in another razor-close finish over Landers Racing Kawasaki’s Rocco Landers. The pair put on quite a show at the front as they passed each other back and forth for the lead. Doyle’s margin of victory over Landers was .007 of a second.

In an equally exciting battle for third place, a tightly bunched group of eight riders were all in the hunt for a podium result. In the end, Quarterley Racing/On Track Development Kawasaki rider Benjamin Gloddy completed the podium in third.

“Today, I didn’t really know what to expect going into the race,” Doyle said. “Rocco was quick in warmup this morning. We were close all race. I knew that it was just going to come down to the last lap. The mistake, I thought actually it would hurt me. I thought he would come by. I guess it kind of worked in my favor, so I’m happy about it.”