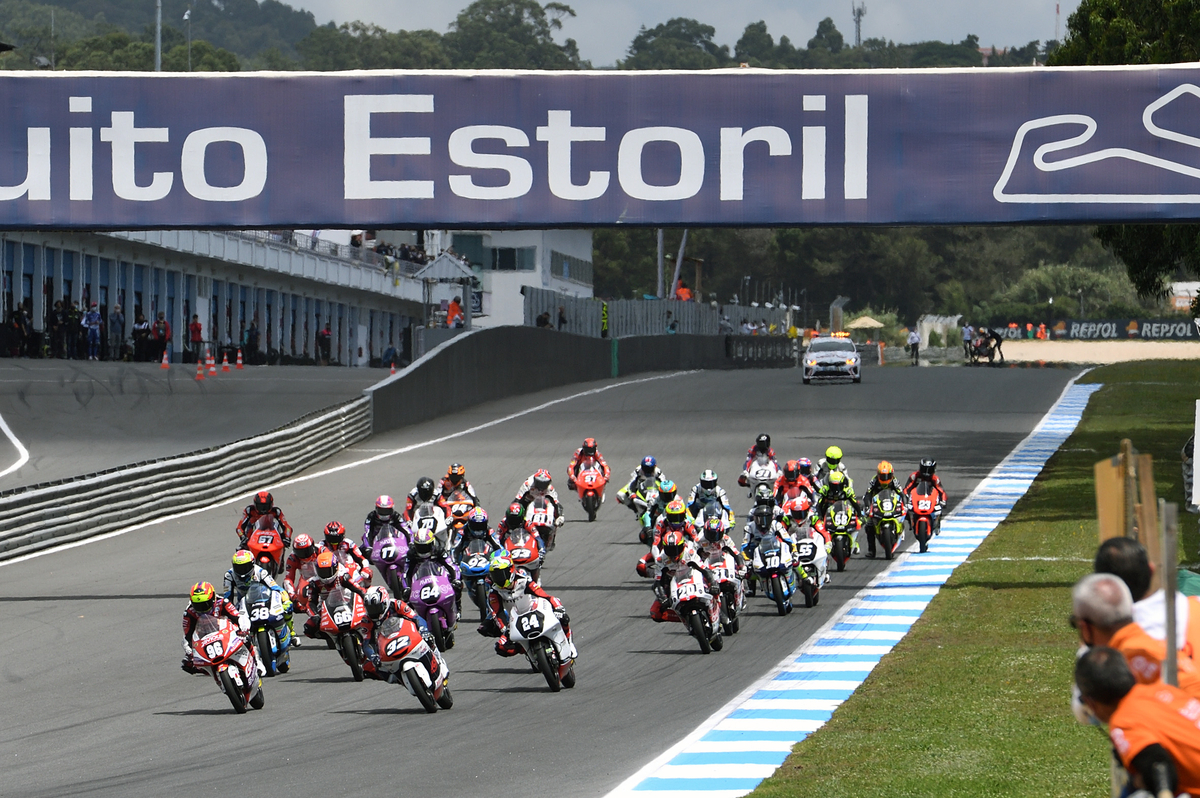 Five races, five last lap duels: the 2021 season couldn’t have got off to a closer start in the FIM CEV Repsol Championship

The threat of rain cleared, and the sun came out of the Circuito Estoril in Portugal as the first race day of the 2021 FIM CEV Repsol calendar beckoned. All five races were final lap fights, as Daniel Holgado (Aspar Junior Team) took a career-first win in the FIM Moto3™ Junior World Championship. In the Moto2™ European Championship, the battle raged between Fermin Aldeguer (Boscoscuro Talent Team-Ciatti) and teammate Alonso Lopez, with Aldeguer taking both wins on the last lap. Both Hawkers European Talent Cup races gave first-time winners; Australian Jacob Roulstone (Leopard Impala Junior Team) won Race 1, and David Garcia (Finetwork Hawkers Junior Team) took Race 2. In all, close racing and rookie revelations set the tone for the year ahead.

The FIM Moto3™ JWCh battle was fierce with seven riders going into the final lap with a chance of victory. Having been leading for most of the race, Daniel Holgado gave GAS GAS a first win in the class by resisting pressure from David Salvador (TM Factory Racing Team). Both riders showcased strong pace throughout the race and demonstrated themselves worthy of Championship contention. One of the major stories of the day was that David Alonso (Aspar Junior Team) joined the podium from 12th on the grid on his Moto3™ debut, one of the most impressive rides of Sunday race-day. Starting from pole, rookie Ivan Ortola (Team MTA) finished in eighth. The Championship standings read the same results as the race, with Holgado heading Salvador and Alonso.

The Moto2™ ECh gave two thrilling races in a season which looks like there’ll be nothing to separate the two Boscoscuro Talent Team-Ciatti bikes. Race 1 saw a major duel between Fermin Aldeguer and Alonso Lopez, as both battled hard and studied each other, whilst Lucas Tulovic (Liqui Moly Intact SIC Racing Team) watched on in third until a crash at Turn 7 – the German pole-sitter was OK. That left Lopez in the lead from Aldeguer until the final lap, where Aldeguer pounced at Turn 6, holding on to take victory. In third place was Adam Norrodin (Liqui Moly Intact SIC Racing Team), giving the Malaysian a career-first podium.

Race 2 was even more dramatic; Aldeguer got a good start whilst Lopez dropped down as low as 11th place from third on the grid. He raced hard was soon in the battle for the lead with his Boscoscuro teammate and Lucas Tulovic. Tulovic hit the front briefly on Lap 7, slowing Aldeguer and bringing Lopez further into play. Rookie Lopez was leading by Lap 11 in a stunning comeback and then led until Turn 6 on the last lap, when Aldeguer took over again. Both collided at Turn 9 on the entrance to the chicane as Lopez barged through but on the drag to the line, Aldeguer slipstreamed his way to the lead to take a second victory of the day. Tulovic completed the podium, whilst teammate Norrodin took fourth. In the standings, Aldeguer leads on 50 points, whilst Lopez sits on 40 and Norrodin is third with 29.

The HETC first outing was a stunning, action-packed encounter which saw drama from the start. Starting from pole, Alvaro Carpe (MT-Foundation 77) got a great start to the race, but it was Casey O’Gorman (Cuna de Campeones) who led into Turn 1. The Irishman’s lead only lasted until Turn 4, where he slid out of contention before remounting. The race continued and there was a battle between Roberto Garcia (Avatel – Cardoso Racing), Phillip Tonn (Liqui Moly Intact SIC Racing Team) and Alberto Ferrandez (MT-Foundation 77), before Tonn crashed at Turn 9, taking out Garcia and Ferrandez. This allowed the likes of Carpe and Australian Jacob Roulstone to come through to the front. Carpe was leading on the last lap but crashed at Turn 7, leaving Roulstone to charge home for a first victory, beating Adrian Cruces (Cuna de Campeones) and Joel Esteban Ruiz (IGAX Team).

In Race 2 of the HETC, it was a far different battle at the front, as Alvaro Carpe was in the mix for victory, but all eyes were on David Garcia, who came through from the fourth row to take honours. Garcia was able to hold off Alberto Ferrandez (MT-Foundation 77) who was in contention right until the end, whilst Hugo Millan (Cuna de Campeones) completed the podium in third. In the Championship standings, it is Cruces who leads the title with 31 points, whilst race winners Roulstone and Garcia are second and third with 25 points.

For all the results from the past, present and future and more news regarding the Championship, visit www.fimcevrepsol.com