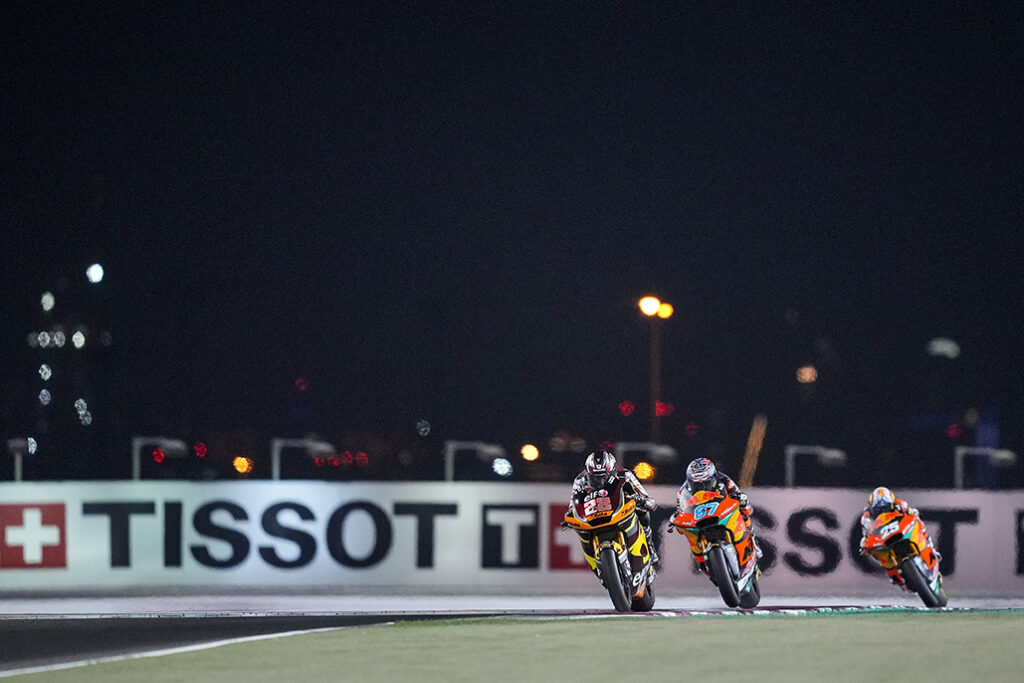 The Brit and the Aussie were at it again, but this time it went to the wire – and it’s Raul Fernandez who completed the podium.

Sam Lowes (Elf Marc VDS Racing Team) leaves Losail with a clean sweep after his second victory in as many weekends, the Brit impressing once again to become the first British rider to win the opening two races of an intermediate class campaign since Mike Hailwood did it in 1966. Quite a stat, but the sailing wasn’t perfectly smooth as Remy Gardner (Red Bull KTM Ajo) was his key challenger once again, this time around even closer than the first. The Aussie pushed the number 22 to the wire, and just lost out by two tenths after hanging back from being too optimistic at the final corner despite temptation. In third, rookie sensation Raul Fernandez (Red Bull KTM Ajo) turned his increasing experience into his first Moto2™ podium after another impressive ride.

Marco Bezzecchi (Sky Racing Team VR46) took the holeshot after some shuffling off the line, with Lowes in second and Gardner third. Raul Fernandez was a little wide and had to settle for fourth, but the quartet in the lead immediately started to haul Kalex and make a gap back to the chasing pack led by Aron Canet (Solunion Aspar Team).

Heading onto Lap 4, the lead changed. Lowes tucked in behind Bezzecchi on the straight and made a Turn 1 move stick, and the Brit put the pedal to the metal to move half a second clear. But Gardner, seeing Lowes getting into his groove, started making moves too and just about scraped past Fernandez after losing out to his teammate.

Bezzecchi soon went from P2 to P4 as both Red Bull KTM Ajos drafted the Italian and set their sights on Lowes, who wasn’t pulling any further clear. Soon enough, Gardner was hounding the Brit, and Raul Fernandez and Bezzecchi were just waiting in the wings…

By Lap 13, Lowes was asking questions of Gardner, although Raul Fernandez was still sticking with the two elder Moto2™ statesmen. Bezzecchi was losing touch though, the Italian 1.5 seconds back from Raul Fernandez. With six to go, it looked like it was Lowes vs Red Bull KTM Ajo for victory under the lights.

The fastest lap of the race, a 1:59.131, was then set by Gardner as the race entered the final five laps. 0.7s split the trio, of which only 0.2s sat between Lowes and Gardner. The Qatar race winner looked to have the edge in the opening half of the lap, the Qatar GP runner-up looked quicker in the latter. But there was still no change though with three laps to go as a trio of 1:59.1s for Gardner still wasn’t enough. Raul Fernandez was clinging on, but the Spaniard was 0.7s away from his teammate’s tailpipes as the leaders swept over the line.

Lowes responded to Gardner’s pressure, but the Australian always seemed to find an answer in return. Heading into the latter half of the last lap, it was now or never and Gardner was right up behind Lowes. Coming out of Turn 14, they were closer than ever. The number 87 looked tempted as he looked down the inside, but no move came there or just after and it was down to the final corner and drag to the line. Lowes braked late into Turn 16, Gardner tried to get on the gas early but the number 22 got the power down. The Brit took the chequered flag 0.190s ahead after a classic game of chess, and both riders set their best laps on the last lap… Gardner’s the fastest of the race.

Raul Fernandez lost touch in the end but it was nevertheless a phenomenal ride from the rookie to claim his maiden Moto2™ podium, turning promise last weekend to an even bigger delivery of results this time out. Bezzecchi eventually had a lonely ride home to P4 and a podium evades one of the pre-season favourites, but the Italian has never loved Doha.

Behind that leading quartet, rookie Ai Ogura (Idemitsu Honda Team Asia) put in a stunner as he shot up the timesheets second time out in Moto2™. Battling with the best of them, the Japanese rider just beat Augusto Fernandez (Elf Marc VDS Racing Team) to fifth place and will now have his sights set on even more in Portimao. Augusto Fernandez, after a tougher start to the year, will also be happier with a top six.

Yet another rookie in the form of Celestino Vietti (Sky Racing Team VR46) picked up a second consecutive point-scoring ride, taking an impressive P7. Stefano Manzi (Flexbox HP40) was just 0.029s behind his fellow VR46 Academy member in P8, with Xavi Vierge (Petronas Sprinta Racing) picking up a P9 from P19 on the grid. He beats 10th place Fabio Di Giannantonio (Federal Oil Gresini Moto2) by six tenths as Diggia faded after an initial charge.

Cameron Beaubier (American Racing), Tom Lüthi (Pertamina Mandalika SAG Team) and Aron Canet crashed out on their own, with Jake Dixon (Petronas Sprinta Racing) and Marcel Schrötter (Liqui Moly Intact GP) crashing out together at the final corner. Joe Roberts (Italtrans Racing Team) also crashed out from the battle behind the top four.

So it’s a maximum of 50 points for Lowes at Losail, the perfect start to 2021. But Gardner is just 10 points behind him in the standings after two P2 and next, we’re heading for Portimao – scene of Gardner’s first Grand Prix victory in 2020…

Sam Lowes: “It was nice, after the crash in Warm Up, again… the pace was great, the first couple of laps when I was behind it felt really easy in Sector 3 to follow because of the wind, it was easy to stay behind but when I got to the front it was hard to pull away because of the wind. I just tried to stay consistent and save a bit of tyre for the end of the race. The last 3 or 4 laps I pushed and and my pace was real fast, I think Remy got the best lap on the last lap but I got it first and him by trying to beat me! Overall I’m very happy, we’ve done a great job these weeks in Qatar, everyone caught up in the second weekend, which is normal. They’re very talented these guys so when you have a margin after a few weeks it gets smaller and smaller. But mentally for me it was a great race to lead like that and I can go to Portimao with good feeling.”