Tom Edwards (Nutec- Benjan – Kawasaki) will lead the line on Sunday at the penultimate FIM Supersport 300 World Championship race of the season after putting in a fantastic lap 1’56.877 in Superpole 2 at the Autodromo Internacional do Algarve, ahead of the two Yamahas of Daniel Valle (BCD Yamah MS Racing) and Manuel González (BCD Pertamina Junior Team by MS Racing).

He leads row one ahead of the Spanish duo of Valle and González, who will also be making their first front row starts in 2018. Row two sees Scott Deroue (Motoport Kawasaki) in fourth, ahead of Dorren Loureiro (DS Junior Team) in fifth, and the returning Robert Schotman (Motoport Kawasaki) in sixth after qualifying from Superpole 1.

Pole Position – Tom Edwards (Nutec- Benjan – Kawasaki)
“It’s really awesome, especially after all my qualifying this year. I’ve been struggling at the start of the weekend and having that pressure of having to come from the back to the front in the race. I’m feeling confident considering I’m starting at the front and now having to deal with some other riders I have to pass.” 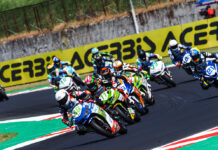 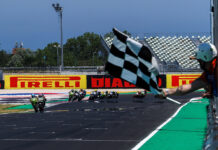