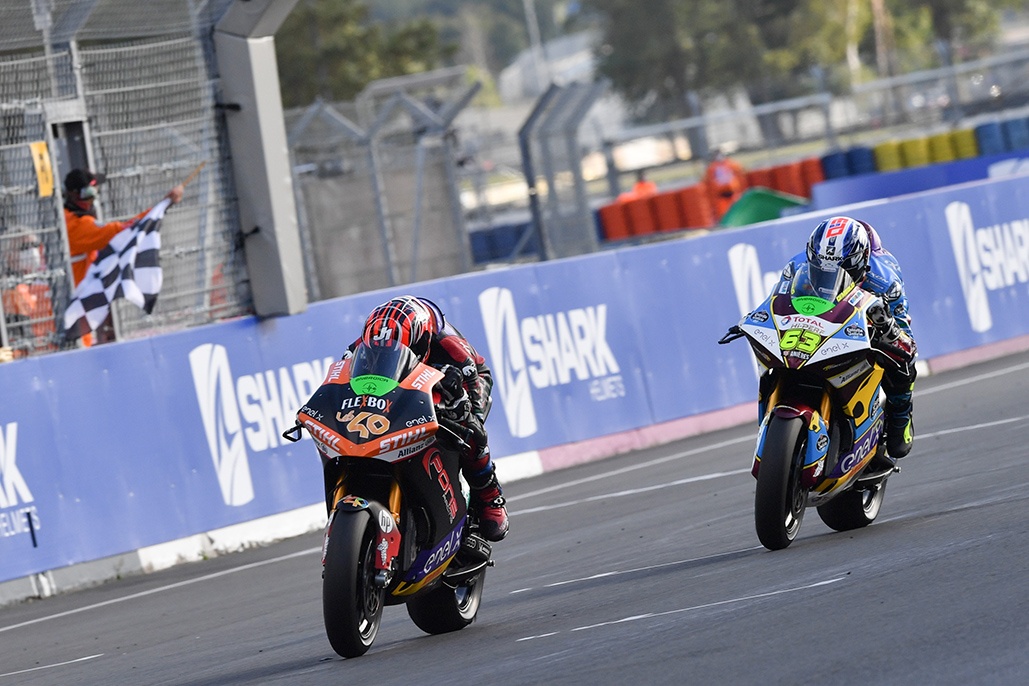 The Spaniard wins and is now the points leader by some margin as drama rips through the first FIM Enel MotoE™ World Cup race in France.

Jordi Torres (Pons Racing 40) is now not only an FIM Enel MotoE™ World Cup race winner, he’s also now the Cup leader by some margin after huge drama in Race 1 at Le Mans. The Spaniard escaped the chaos to lead the majority of the race and defend from home hero Mike Di Meglio (EG 0,0 Marc VDS), who took an impressive second, with Niki Tuuli (Avant Ajo MotoE) completing the podium and back on the box after a tougher season for the first ever MotoE™ race winner. But the drama…

It began from the off as the first start was Red Flagged due to a crash for Mattia Casadei (Ongetta SIC58 Squadra Corse), the Italian losing his chance to fight for the Cup early on. He was up and ok, but the bike was left stricken on track and the race was stopped. After the re-start, it would be a five-lap super sprint to the finish with everything on the line.

It was the man ahead going in who got the holeshot, Matteo Ferrari (Trentino Gresini MotoE), with everything briefly going to plan until disaster struck and the Italian suddenly crashed out – leaving Torres, Di Meglio and more to avoid. And behind that, even more drama was changing the landscape of the standings as a huge, domino-effect incident saw Xavier Simeon (LCR E-Team) and teammate Niccolo Canepa going down, and second overall Dominique Aegerter (Dynavolt Intact GP) caught up in it. The field scattered, the riders scrambled to get back on and Torres kept it pinned at the front. Aegerter was the only one who managed to get going but far off the rest of the field – and Torres was in the driving seat.

The Spaniard, by then, was well in the clear but Di Meglio was on a march, the Frenchman making his way through to second and then able to reel Torres in, chunk by chunk. Tuuli was up to third too, having navigated his way to the front through the chaos, and the Finnish rider kept pace with the Frenchman as the two managed to home in on Torres and drop Josh Hook (Octo Pramac MotoE) from the podium fight.

Onto the final lap, Di Meglio was right on Torres, the gap gone and the Frenchman looking menacing. Would he go for a lunge to taste home turf glory? And Tuuli, in third, remained within striking range. The three thundered round Le Mans for the final time but ultimately, the answer was no. Torres defended to the line and was able to take his first ever MotoE™ win in some style, the 25 points also putting him well clear in the standings… and the result meaning he starts from pole in Race 2.

Di Meglio said it was better to finish second than crash and that he did, back on the box on home turf, and Tuuli seemed somewhat surprised by third and a podium result. The Finn was a huge chunk faster than in Free Practice to set the fastest MotoE™ lap of Le Mans and earn the rostrum, however, getting some pay back after a tough year affected by injury. Di Meglio and Tuuli now start second and third on Sunday, too.

Hook took his best ever MotoE™ result at a track he knows well – having shared the top step with Di Meglio as teammates in the 24h endurance race at the track earlier this year – and the Aussie had some solid time in hand ahead of Tommaso Marcon (Tech 3 E-Racing) as the Italian bounced back from a dramatic Misano Race 2 and grid penalty. Eric Granado (Avintia Esponsorama Racing) was sixth and not far off Marcon, the Brazilian banking some good points.

Maria Herrera is classified seventh after a track limits penalty for teammate Alejandro Medina switched the order of the two Openbank Aspar Team riders, Medina is forced to settle for eighth. Alessandro Zaccone (Trentino Gresini MotoE) was ninth, with Lukas Tulovic (Tech 3 E-Racing) completing the top ten despite his recent surgery, the German putting in a superhuman effort to end the race only six tenths off Zaccone.

Xavi Cardelus (Avintia Esponsorama Racing) was next up ahead of another superhuman performance in the form of Alex de Angelis (Octo Pramac MotoE). The Sammarinese rider had a huge crash in E-Pole on Saturday morning but made it through the race to score points, with now only one race left of his career before he retires. Jakub Kornfeil (WithU Motorsport) took P13, also taking a penalty but his a time addition.

Finally, after the 13 men ahead of him, Dominique Aegerter crossed the line. The second huge bout of bad luck for the Swiss rider cut his chances at the Cup, but the effort was a valiant one as he nevertheless salvaged two points and kept going. Now, it all goes down to Sunday.

Torres sits on 104 points heading into the last race of the year, and the Cup would appear his to lose as he also starts from pole. Ferrari is 18 points adrift and Aegerter 20, but both start further back after the drama on Saturday, with Race 1 deciding the grid for Race 2. Can Torres wrap it up? Tune in from the later time of 15:40 (GMT +2) on Sunday as MotoE™ races for the final time in 2020!