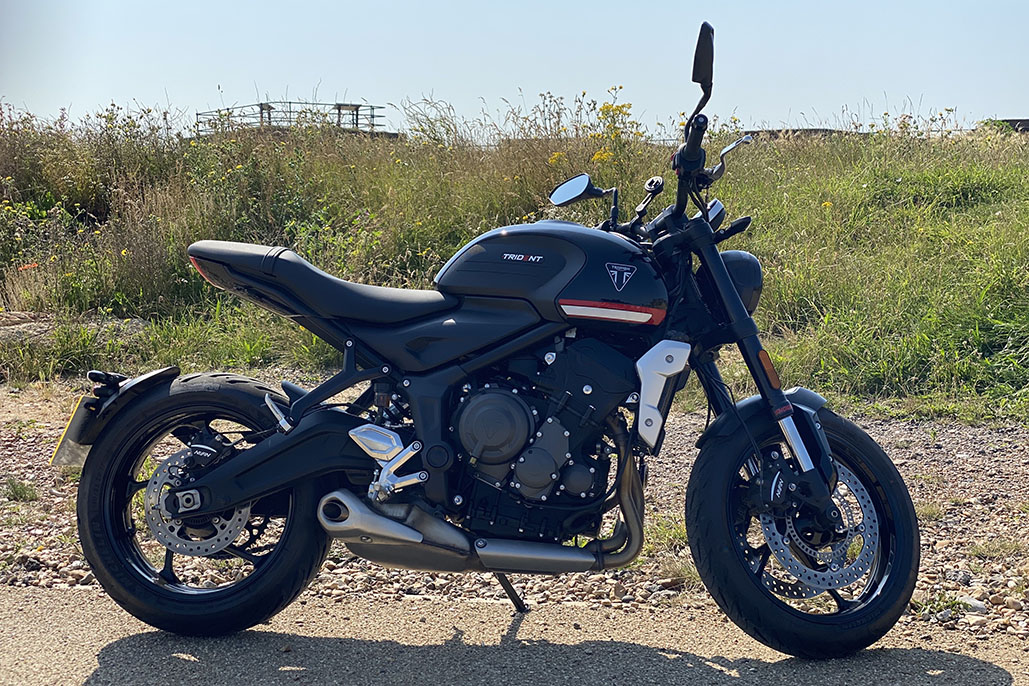 Triumph is one of the oldest motorcycle manufacturers in the world that continues its legacy of providing fun, agile & distinct motorcycles to enthusiasts all over the world. The latest addition of Trident 660 has infused a new spirit and provided riders with an “entry-level” Triumph that is every bit true to Triumph’s DNA as it gets. The 660cc streetfighter has almost been developed from the ground up and it was only just recently that I really got a chance to test it comprehensively and safe to say, I was pleasantly surprised by the spritely character of the youngest Trident.

Although the Trident 660 is built in Thailand, but its superb built quality and minimalistic form allow it to remain true to Triumph’s heritage. Triumph has done a great job at blending retro styling with contemporary needs making the Trident looks well-balanced & refreshing. Part of the reason behind the refreshing looks can be contributed to its street-racer & naked style which, as we all know, is a category where Triumph really excels. The round LED headlight & a rather brief but cute rear end adds to the overall character & styling of the motorbike which I am sure you’ll also appreciate once you’ve got a glance at it up-close.

Let’s move on to the most important feature of the Trident 660, which, of course, is its powerplant. Unlike the majority of 600cc motorbikes available out there, the “baby” Triumph packs a 3-cylinder engine which, despite having one less cylinder churns out enough punch to make your day-to-day rides a fun experience. The sweet roar of the engine is also quite distinct and helps the British bike boast its unique identity. The power output is rated at 80 hp with 64 Nm of torque, both of which are readily available at mid to higher RPMs, which helps you explore the realms of the bike at a relatively early stage. The robust engine happily takes abuse while the six-speed gearbox effortlessly blends all the gears, leaving no stones unturned for you.

Worthy to mention here is the fact that the Trident 660 weighs in at 190 kgs, which when combined with its 80 hp might feel a bit underwhelming in elevated areas or a racetrack, but I certainly didn’t feel that the bike would be better off with some additional horses or pulling power during my test rides in the extremely sunny Sussex countryside.

The Triumph Trident 660 sits on a tubular steel frame and its ride is assisted at the front by Showa folks and at the rear by Showa’s pre-load adjustable mono-shock. The non-adjustable & a bit harsh folks at the front are a slight bummer, but they surely did wonders when it comes to handling or slight lean angles. This is where the Michelin tyres also come into play, they provided ample grip on dry & wet surfaces. The chassis, developed from the ground up, has enough flexibility to let you go hooligan if you are in the mood to go wild.

Another feature that stands out is the ergonomics which is well set up. The round digital instrument cluster honors the tradition of retro Triumphs, albeit in a contemporary way and all of its controls are nicely laid out on the left handlebar, whilst the settings too are quite intuitive. The riding posture is slightly similar to sports motorbikes but is far from being uncomfortable. The seat, placed at a height of 805 mm(31.7 inches), is welcoming for all age groups, being 5’8″ (but with short legs I’ve been told) meant I was able to get both feet down when at the lights or junctions. The comfort level of the seat is at par or better than the competitors and the pillion seat is wide & comfy enough for someone wanting to take a short trip on it but would suggest the pillion grip accessory that you can purchase as an extra.

Whilst riding on motorway due to the nakedness of the bike (which I loved the looks) I was buffeted around a fair bit especially living by the seaside you get extra wind off sea. That said Triumph do supply as an extra accessory a moulded fly screen which they say is designed to reduce wind fatigue.

Overall, the Trident 660 is a great motorbike for newbies & pros alike. Triumph’s impeccable build quality is there, the overall design falls nothing short of refreshing. You will walk away from the bike with a smile on your face. At from £7,395.00, Triumph’s latest package not only proves its worth but also offers a lot to those who want a quality British two-wheeler. I had the Sapphire black for this test which had the looks but I do particularly like the union jack detail on the grey model Matt Jet Black and Silver ICE and also features on the Silver Ice Diablo Red but these are £100 more from £7,495.00 (prices from official website)

For more specific details from a previous post https://superbike-news.co.uk/all-new-triumph-trident-660-triple-the-advantage/

Also many thanks to: