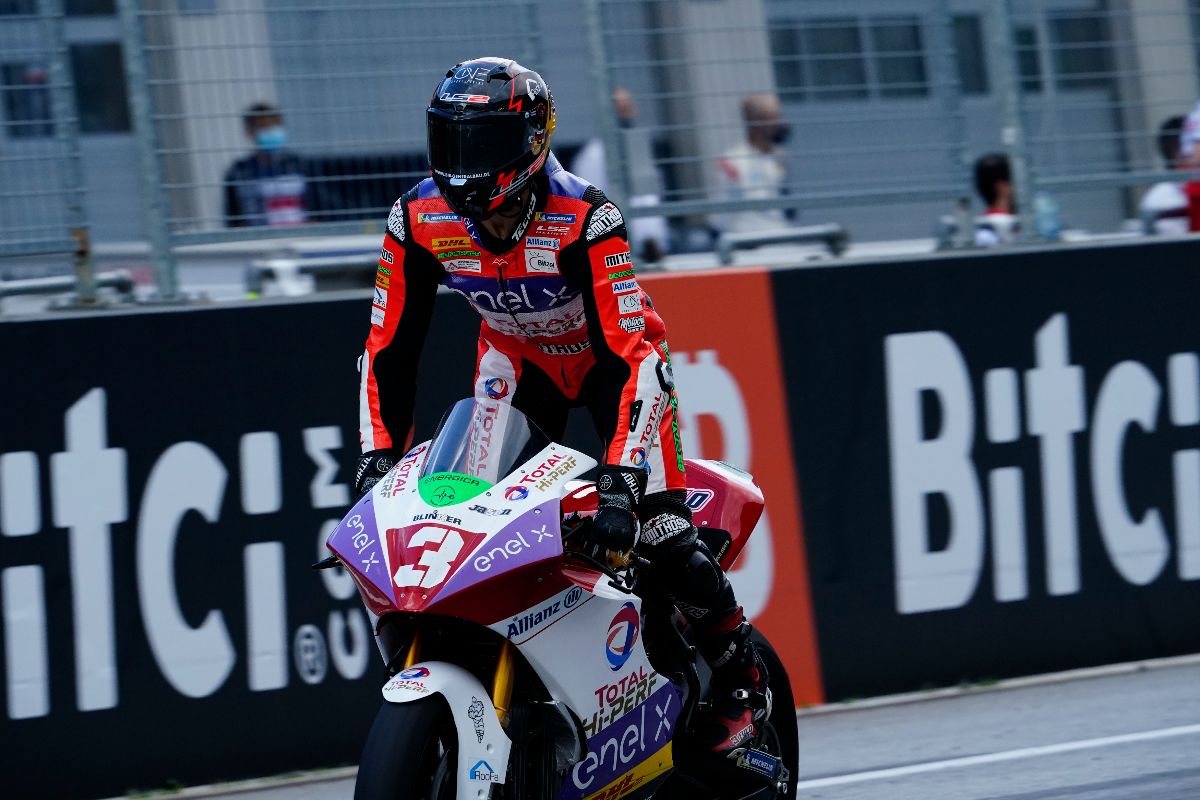 Lukas Tulovic (Tech 3 E-Racing) put in a stunner in Austria to take his maiden win in the FIM Enel MotoE™ World Cup, the German blasting away from the front row, taking the holeshot and proving uncatchable thereafter. Behind him a group fight for the podium went down to the last lap, with Eric Granado (ONE Energy Racing) completing an impressive comeback from 13th in second place and Dominique Aegerter (Dynavolt Intact GP) just holding off Fermin Aldeguer (Openbank Aspar Team) for third.

Tulovic shot away from second on the grid and held his ground for the holeshot, the German then instantly putting the pedal to the metal in the lead. Behind him, Aldeguer was forced to settle into second as Granado made big gains and the pack shuffled.

Not long after that, Tulovic was already whopping 1.8 seconds clear as some key contenders fought it out in his wake. Aegerter was one, soon in the thick of the action and managing to climb up to P2 by Lap 3 before an Aegerter, Aldeguer, Granado battle royale was about to go off.

The final lap saw Tulovic keeping just under a second in hand, the German out of reach but the fight behind still gaining ground despite the scrap. Turn 3 saw Granado initially get the better of both Aegerter and Aldeguer as the trio went into Turn 4 locked together, but the Brazilian was able to hit back and floor it to just stay clear of the fight in the final sector.

Aegerter then sliced through for P3 at Turn 9, muscling past Aldeguer, and the Spanish rookie swept round Turn 10 to give himself the best run to the line, hoping to just pip the Swiss rider to the flag. But it wasn’t to be.

Tulovic, meanwhile, started his victory lap and treated the fans to a burnout, with Granado taking second and Aegerter just, just holding on. The gap between the Swiss rider and Aldeguer was less than two hundredths and the Spaniard’s wait for a first MotoE™ podium rolls on, although a maiden E-Pole is ticked off.

Rookie Hikari Okubo (Avant Ajo MotoE) claimed P5 to celebrate his best result, the Japanese rider beating points leader Alessandro Zaccone (Octo Pramac MotoE) by just under half a second. Zaccone’s lead is still seven points ahead of the final round of the season at Misano though, with reigning World Cup winner Jordi Torres (HP Pons 40) 0.053s off the Italian in Austria, taking P7.

That’s a wrap on Austria, and MotoE™’s return to the Red Bull Ring tightens up the standings even more: 11 points, four riders and two races remain in the 2021 MotoE™ title race, and next we’re off to Misano… home turf for Zaccone, but known turf for Granado, Aegerter, Torres and very much so for Ferrari. Tune in for more when MotoE™ returns on the Riviera di Rimini!

Lukas Tulovic: “It will be difficult to find the correct words after winning here in Austria in front of so many German and Austrian fans, it’s an amazing feeling. I have to say a huge thank you to my team and Herve Poncharal, they’ve believed in me and given me this opportunity in MotoE and we’ve been so many times in top positions in practice and E-Pole and it’s never worked out in the race. I’m so happy to finally be on the podium, and even winning the race. It’s incredible!”
For more info checkout our dedicated MotoE News page