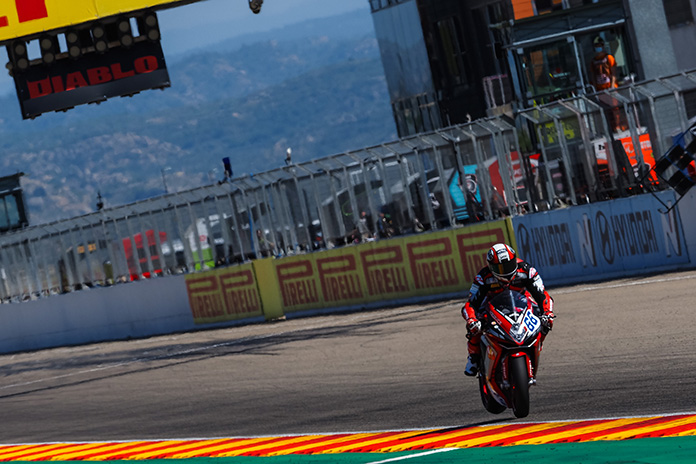 It may be three years since Niki Tuuli’s (MV Agusta Corse Clienti) last appearance in the FIM Supersport World Championship but the Finnish rider topped both Free Practice sessions at MotorLand Aragon for the Pirelli Aragon Round as he looks to immediately add to his race wins tally upon his return to the class, posting a time of 1’54.394s in the morning Free Practice session.

The recent experience of both Steven Odendaal (Evan Bros. WorldSSP Yamaha Team) and Philipp Oettl (Kawasaki Puccetti Racing) was not enough to overhaul Tuuli at the top of the timesheets, with Odendaal finishing less than a tenth away from the Finnish rider. Oettl was another four tenths back in third place as both the German and South African riders search for their first wins in WorldSSP.

Always close at the front, Frenchman Jules Cluzel (GMT94 Yamaha) goes in search of his first WorldSSP title in 2021 and started the season with fourth place in the combined Free Practice standings, fending off the challenge from the returning Federico Caricasulo (GMT94 Yamaha) by just 0.034s. Rookie Dominque Aegerter (Ten Kate Racing Yamaha) was in sixth place, just ahead of Sweden’s Christoffer Bergman (Wojick Racing Team), whose fine form continued in the second practice session.

2019 Champion Randy Krummenacher’s (EAB Racing Team) return marred by limited in running in Free Practice 1, although the Swiss rider was able to set plenty of lap times in Free Practice 2 to sneak into the top eighth of the combined classification, just over a second away from Tuuli’s best time with most riders not improving from the morning session.

Spanish rookie Marc Alcoba (Yamaha MS Racing) claimed ninth spot in the combined classification with Raffaele De Rosa (Orelac Racing VerdNatura) rounding out the top ten on his first appearance for his new team at a WorldSSP round; the Italian the highest-placed rider to improve their time in the afternoon.

45-year-old Pawel Szkopek (Yamaha MS Racing) had a crash in the first practice session of the day at Turn 8 but was able to re-join the circuit. Verti Takala (Kallio Racing) came off his bike at the end of the second practice session although the Finnish rider was able to walk away from the accident at Turn 3.