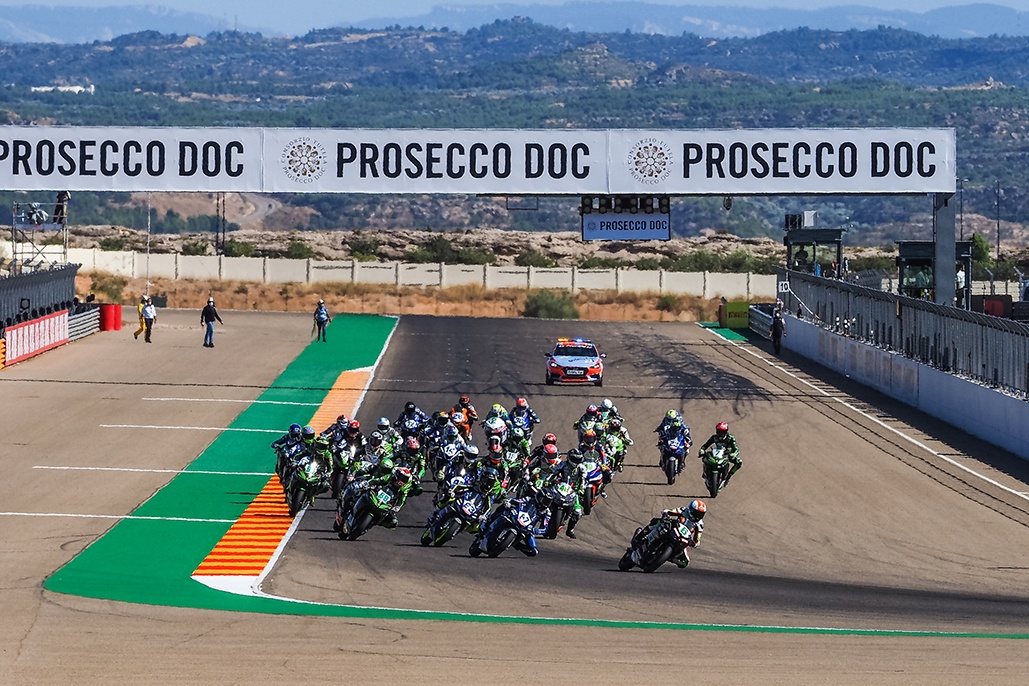 The excitement continues for FIM Supersport 300 World Championship with a second round in as many weekends at MotorLand Aragon, with the circuit playing host to the Pirelli Teruel Round. As with every WorldSSP300 round in 2020, there are two races scheduled throughout with one race on Saturday, after Tissot Superpole, and one on Sunday.

Jeffrey Buis (MTM Kawasaki MOTOPORT) hauled himself to the top of the Championship standings with two victories at the Aragon Round by claiming 50 points and becoming the first repeat winner of 2020. His Race 1 victory was the second-largest margin of victory in WorldSSP300 history; winning by almost seven seconds. Buis heads into the Teruel Round as the rider to beat but will the competition be able to overhaul him after his double success?

Sitting just two points behind Buis is 2018 Champion Ana Carrasco (Kawasaki Provec WorldSSP300) with Carrasco picking up a second place as her best result during the Aragon Round. The podium finish was her best result at MotorLand Aragon in WorldSSP300 and something Carrasco can use to build on during the next two races at the circuit. Will she be able to go one better and claim victory?

Scott Deroue (MTM Kawasaki MOTOPORT) is third after a mixed bag of results at the Aragon Round. The Dutchman retired from Race 1 on the penultimate lap of the 10-lap race but bounced back the next day to secure a third-place finish; meaning Deroue sits just three points behind teammate Buis in the Championship standings with 83 points. Deroue has a strong record at Aragon with his Race 1 retirement the only time he has not finished on the podium in WorldSSP300, putting him in a strong position to potentially move to the top of the standings.

Jerez Race 1 winner Unai Orradre (Yamaha MS Racing) is five points behind Deroue in the Championship in fourth place; the eight-point gap between first and fourth showing just how competitive WorldSSP300 is. Orradre picked up a fourth and sixth place at the Aragon Round and will be looking to build on those strong results and return to the rostrum to continue his Championship charge as the 16-year-old continues to impress in WorldSSP300.

Tom Booth-Amos (RT Motorsports by SKM – Kawasaki) has lost a bit of ground in the Championship following a fifth place and a retirement at MotorLand Aragon; but remains in fifth place after a strong run of podiums to start the season. The British rider will be looking to get back to scoring consistent podiums to get his title challenge back on track following two retirements in the last three races.

Thomas Brianti (Prodina Ircos Team WorldSSP300) completes the top six in the Championship with the Italian rider securing a second place in Race 2 to drag himself up the Championship standings. A strong result in Race 2 puts Brianti in a good position heading into the Teruel Round as he looks to build on two top-ten finishes at MotorLand Aragon. Will the 17-year-old be able to secure more podium finishes at the Teruel Round?

Ton Kawakami (Yamaha MS Racing) and brother Meikon Kawakami (Team Brasil AD 78) both had strong Tissot Superpole sessions at the Aragon Round, starting the races from second and third and will be looking to build on that. Koen Meuffels (MTM Kawasaki MOTOPORT) had qualified second before a penalty for a technical infringement meant he did not take part in Race 1 and started from the back of the grid in Race 2; battling his way to a top ten finish in Race 2. Meuffels will be hoping this pace shown in Race 2 continues throughout the Teruel Round to score strong results.