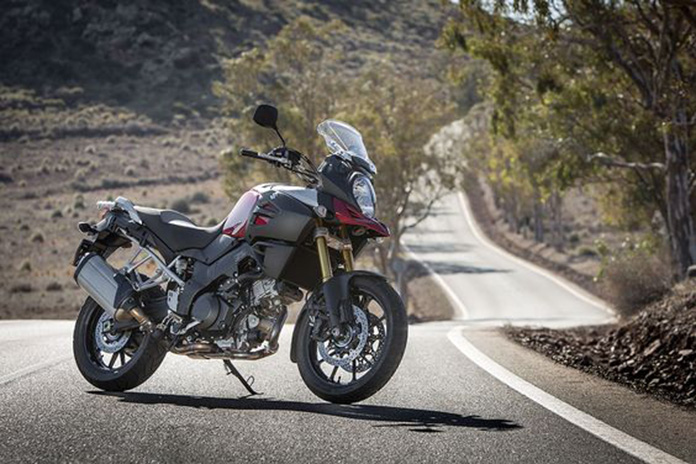 Suzuki GB is delighted to announce availability of the new and hotly anticipated V-Strom 1000, as well as confirming service intervals for what is already being dubbed “one of the best adventure bikes we’ve ever seen”, according to one of the UK’s leading motorcycle journalists.

The new V-Strom boasts an all-new chassis, heavily revised engine, ABS and three-way traction control system, while remaining competitively priced at £9,999, and is set to arrive in showrooms from 17 February with dealers already taking deposits on the new adventure machine.

Suzuki GB General Manager Paul de Lusignan announced the bike’s availability, commenting, “We were delighted with the feedback the new V-Strom 1000 received at its worldwide press launch last month, and even more importantly, we’ve been really encouraged by feedback from potential customers who have been able to take advanced test rides on our recent nationwide dealer tour. This is clearly a highly anticipated and eagerly awaited bike, not just for customers but for Suzuki, too, and we’re looking forward to customers being able to get their hands on it from next month.”

The new V-Strom 1000 was launched in the mountains around Almeria in southern Spain, with journalists praising the bike’s light weight and ease of handling, as well as the impressive 76ft.lb of torque at just 4,000rpm. Journalist Matt Hull commented, “It is one of the most comfortable long-range bikes I’ve ridden with one of the smoothest V-twin engines I’ve tried. The V-Strom is as happy on B-roads as it is on motorways and it’s very good value,” while Motorcycle Sport and Leisure’s Tony Carter stated in his summary, “Suzuki has made something that might just be one of the best adventure bikes we’ve ever seen.”

Early production models of the V-Strom 1000 have also been doing the rounds in the UK as part of a nationwide dealer tour, with customers able to take test rides and put down deposits before the bikes arrive in February. Customers can still also benefit from Suzuki’s seat exchange programme, and can choose either a higher or lower option seat for no extra cost at point of sale. The new V-Strom is also available with a comprehensive range of Genuine accessories too, including integrated luggage designed during development process.

To book a test ride on the new V-Strom 1000, contact your local authorised Suzuki dealer and for more information visit www.suzuki-gb.co.uk.