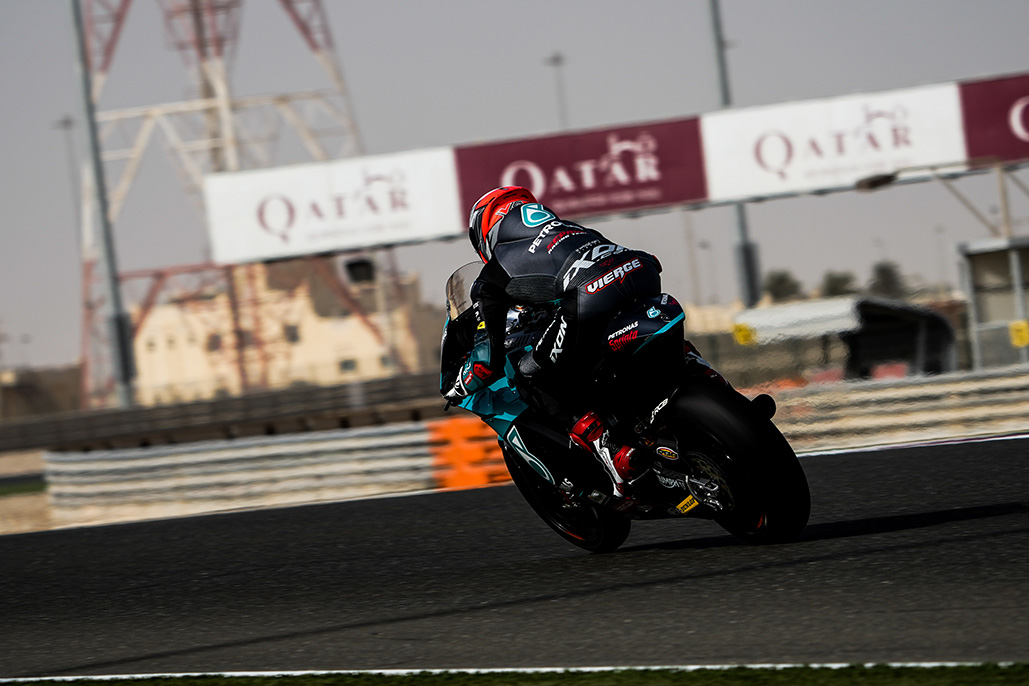 The Petronas Sprinta Racing rider heads a gaggle of familiar and fast faces at the top on Saturday.

Cometh the hour, cometh the six riders within just 0.089: that’s how the saying shall henceforth go. The intermediate class in Qatar has been close in the current era, but never more so on than Day 2 of the Official Moto2™ and Moto3™ Test at Losail International Circuit. The leader of the Moto2™ pack was Xavi Vierge (Petronas Sprinta Racing), and the rivals within 0.089 Aron Canet (Inde Aspar Team), Jorge Navarro (MB Conveyors Speed Up), Remy Gardner (Red Bull KTM Ajo), Jake Dixon (Petronas Sprinta Racing) and Marco Bezzecchi (Sky Racing Team VR46)… whetting appetites for the race weekend ahead quite considerably.

It was windier on Day 2 and once again the morning session was a quiet one – lonely, even, for Stefano Manzi (Flexbox HP 40) as the Italian was the sole rider to set a time. By Session 2 though, the ante was upping and the pack heading out, with the final session of the day then seeing all but one improve to set the combined timesheets. At the top was Vierge’s late charge with that five-rider gaggle on his tail, with Canet forced to settle for second for the second day in a row but looking threateningly fast, Navarro making waves up the timesheets, Gardner present once more, Dixon improving as he comes back from serious injury, and Bezzecchi leaping into the higher echelons after a more muted Day 1…

The gaps didn’t exactly get huge from there on out. Two and a half tenths off the super six, Bo Bendsneyder (Pertamina Mandalika SAG Team) slots into P7 as he settles in at his new team and on his new chassis, looking ever more impressive as track time goes on. Likewise the man in eighth: Raul Fernandez (Red Bull KTM Ajo). The Spanish rookie impressed on Day 1, so a grander word is needed for Day 2 as he ended Saturday just 0.019 off Bendsneyder. Fernandez’ 1:59.204 is only just over a second off the 2020 pole lap…

Two veterans came next, with Sam Lowes (Elf Marc VDS Racing Team) in ninth by just 0.007 and Joe Roberts (Italtrans Racing Team), setter of the aforementioned pole, completing the top ten by 0.034. Both have shown good pace on both days so far too, and will likely be pushing for a statement time attack on Sunday.

Tony Arbolino (Liqui Moly Intact GP) continued his impressive adaptation and was the second fastest rookie on Saturday, taking 11th and within 0.115 of Roberts. Augusto Fernandez (Elf Marc VDS Racing Team) slots into 12th ahead of another impressive rookie in the form of Ai Ogura (Idemitsu Honda Team Asia), the Japanese rider only another tenth in arrears.

The aforementioned Manzi ends the day in 14th as he adjusts to life at Flexbox HP 40 and on a Kalex, with Tom Lüthi (Pertamina Mandalika SAG Team) rounding out the top 15 after Day 2. Rookie American Cameron Beaubier (American Racing) leapfrogged a few of his rivals from Day 1 to take 19th and get the better of reigning Moto3™ World Champion Albert Arenas (Inde Aspar Team) by just 0.021, with the timesheets necessitating the use of hundredths or thousandths to measure the gap through almost the entire field.

Sunday now awaits as a final day of preparations, before Moto2™ get ready to race next weekend. Social media channels have all the updates, as well as – of course – motogp.com![wpdiscuz-feedback id=”wrjx4oltsl” question=”Tell us what you think?” opened=”1″][/wpdiscuz-feedback]

Hammond Funds Historic Car Restoration Business With His Own Vehicles