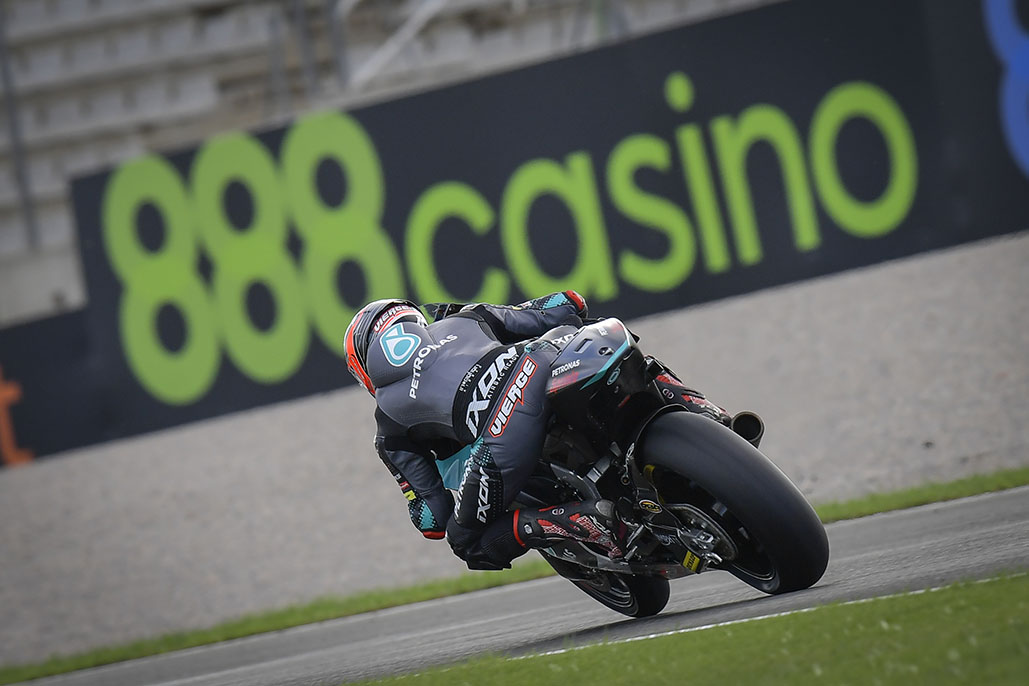 The Spaniard takes it in a last dash on a drying track, ahead of Roberts and Championship leader Lowes.

Hafizh Syahrin (Inde Aspar Team Moto2) topped a tricky Q1 from Andi Izdihar (Idemitsu Honda Team Asia), with Championship contender Luca Marini (Sky Racing Team VR46) and Bo Bendsneyder (NTS RW Racing GP) also moving through. A dry line had appeared in Valencia, meaning it was just about time for slicks although it was by no means a fully dry qualifying session for the intermediate class.

Marco Bezzecchi (Sky Racing Team VR46) was fastest after the first flurry of laps in Q2, but as everyone got going, the lap times tumbled. Roberts set a 1:44.604 to sit on provisional pole with eight minutes to go but once more, the time wouldn’t be quickest for long. Vierge was the first man into the 1:43s as Lowes slotted into P2, three tenths off the Spaniard.

Bezzecchi then went back to P1 with Roberts going a tad slower to take second, but Lowes went quicker than the lot of them to go top by three tenths. Again though, the lead changed. Roberts once more took provisional pole and this time, Lowes didn’t beat his time – but it was close between the Brit and American.

Red sectors for Bezzecchi, Roberts and Lowes lit up the screens, but the latter was on a different planet. A 1:39.790 saw the Championship leader soar to 1.1 seconds clear of anyone else, decimating the competition. And yet, the gap was soon cut by Vierge, although Lowes hit back once again to extend it to seven tenths.

It remained far from over though. Bezzecchi, Roberts, Vierge, Remy Gardner (ONEXOX TKKR SAG Team) and Lowes all had red sectors. First it was Roberts who took provisional pole, but Vierge demoted the American to second almost immediately. Could Lowes respond to get back on top? Not this time! The points leader stayed third despite improving his laptime, advantage overcome and Vierge securing pole position in Valencia, his first since the 2019 Argentina GP. Roberts stayed second, too, just 0.002 ahead of Lowes as the duo finish just under two tenths down.

Gardner spearheads the second row in P4, the Aussie pipping Bezzecchi by just 0.033 to demote the Italian to fifth. Jorge Martin (Red Bull KTM Ajo) completes the second row in P6 as the front two rows are split by 0.520 seconds, with seventh place Marini next up but 1.3 seconds back from pole. The newly-announced 2021 Ducati rider needs a big result on Sunday to keep tabs on Lowes and Bastianini in the title race, and P7 is a solid place to start.

So where’s Bastianini? The number 33 produced a miraculous save in Q2 to keep himself upright but he couldn’t keep himself nearer the front, set to start P15. What can he do on race day? We’ve seen him bounce back before…

Xavi Vierge: “I’m so happy, again difficult times and injuries, it wasn’t easy to ride but these conditions mean it doesn’t affect it. The weekend was tricky conditions, in the rain I never felt comfortable so when I saw the conditions I wanted to start on slicks because I knew on the dry line I could go fast. I went step-by-step and lap-by-lap, and like always on the last lap you have to give it all and I made it this time. Super happy, thanks so much to the team they’re always supporting me and working so hard.”