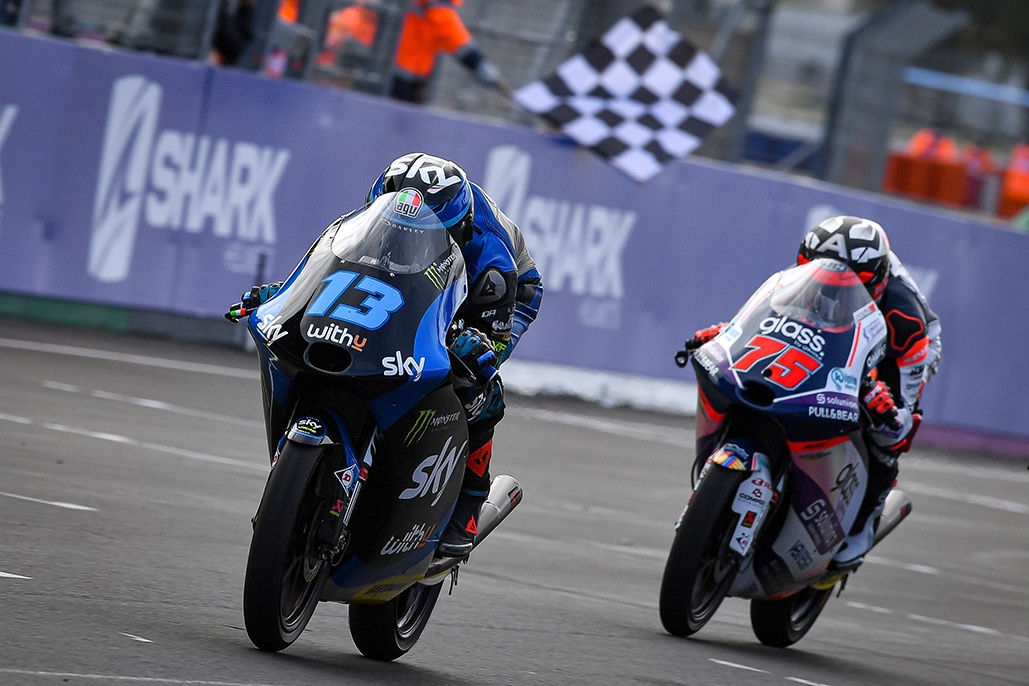 The Moto3™ title fight now sees four riders in 20 points… and another 25 in play at MotorLand.

Another race, another Moto3™ rollercoaster and another throw of the dice in Le Mans sees the Moto3™ Championship heading into the Gran Premio Michelin® de Aragon looking a little spicier than it did just a week ago. For one, home hero Albert Arenas (Solunion Aspar Team Moto3) is back on top after a podium saw him hit back against Ai Ogura (Honda Team Asia), and for two… the three men behind them all had another shuffle.

For some time, the standings have seemed like a three horse race, but no longer. John McPhee (Petronas Sprinta Racing) is actually now fifth after he suffered another DNF, and it’s Celestino Vietti (Sky Racing Team VR46) who’s leapt up to third with another impressive victory. On his tail is Tony Arbolino (Rivacold Snipers Team), who’s gaining ground by virtue of some consistent podiums, but hasn’t yet stood on the top step. So who’s the favourite at MotorLand?

It’s hard to tell, but Arenas is on home turf and good form, having lost out before Le Mans by no fault of his own to boot. He’ll be pushing hard to take another win and stamp some authority back on the standings, but there are some serious motivations fuelling those on the chase. For McPhee it’s becoming a now or never, but those now just ahead of him are so close to the top they can almost taste it. For Arbolino it’s a win drought he wants to end, and for Vietti it’s just 16 points between him and the top. If they can strike again so soon, the Championship could look very different again…

But what about Ogura? Since Barcelona the Japanese rider’s trademark consistency has has gone slightly MIA, although he’s salvaged two solid points finishes from two difficult qualifying positions. Can he turn it around at MotorLand? There are some good memories at the track for the number 79 at least – it’s where he took his first podium. Can the sophomore use that as a springboard to get back in the game? He’s had podiums, he’s now had a pole position… he’s just missing that first win.

Jaume Masia (Leopard Racing), meanwhile, has a first win, and he looked on for a second until the last two laps in France. He can be expected in the fight at MotorLand – it’s also home turf for him – as can compatriot Raul Fernandez as the oft-pacesetting Red Bull KTM Ajo rider hasn’t quite yet got to grips with the final battle to take a podium just yet. And then there’s Darryn Binder (CIP – Green Power), who did just that at Barcelona for his first victory and then had a mechanical at Le Mans. He’ll be on a charge… although when is he not?

And there’s more. Ayumu Sasaki’s (Red Bull KTM Tech 3) bad luck finally came to an end in France, with the Japanese rider going from best qualifying of the year to best race result, and no one ruining his day. Can he keep that frontrunning form and mix it with the front group, along with the likes of the only rider who’s already won at the track in the class, Romano Fenati (Sterilgarda Max Racing Team)? He was the new victim of the bad luck at Le Mans. And what about Gabriel Rodrigo (Kömmerling Gresini Moto3), who is getting back into the mix, and Dennis Foggia (Leopard Racing)? Foggia, like Ogura, took his first podium at MotorLand…

It’s heating up in the standings and hopefully in the weather as Moto3™ head for Aragon. Can Vietti and Arbolino gain more ground? Will Arenas strike back? Or can the others tussling in the front group stamp their name on the podium? Find out on Sunday at 11:00 (GMT +2) as Moto3™ slipstream MotorLand.