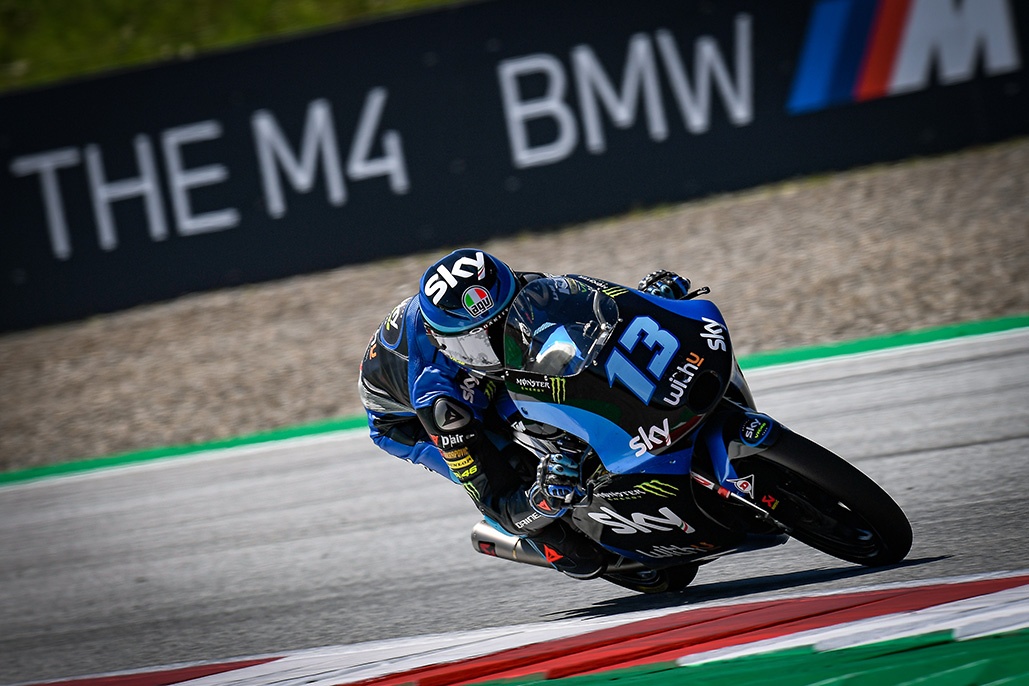 The Italian throws down the gauntlet after just missing out on the podium in the Austrian GP.

Celestino Vietti (Sky Racing Team VR46) is the fastest man on Friday in the BMW M Grand Prix of Styria, setting the only 1:35 of the day in FP1 and no one able to depose him in the afternoon. Championship leader Albert Arenas (Valresa Aspar Team) is second, three tenths down by virtue of his FP1 time too, with Tatsuki Suzuki (SIC58 Squadra Corse) in third from his fastest lap in FP2.

FP1
Vietti was the fastest out the blocks, topping the first session of the weekend with a 1:35.997 and the only man in the 1:35s then and, ultimately, all day. That said, he also crashed at Turn 1 the end of the session, rider ok. Championship leader Arenas was second quickest as he is overall, three tenths down, ahead of Kömmerling Gresini Moto3’s Jeremy Alcoba as the reigning Moto3™ Junior World Champion took third in the morning.

John McPhee (Petronas Sprinta Racing), who is second in the Championship heading into the Styrian GP, suffered an early spill at Turn 10 and ended the session in P11, rider ok.

The other crasher was Romano Fenati (Sterilgarda Max Racing Team), who finished the session in P17.

FP2
Suzuki took over in the afternoon to head the timesheets, quickest in FP2 ahead of Gabriel Rodrigo (Kömmerling Gresini Moto3) but by just 0.011. Arbolino was third, still within 0.060, with McPhee turning the tables on key rival Arenas to beat the Spaniard to fourth.

In typical Moto3™ style, much of FP2 was spent with many in the field seeming to almost be racing a little early – with one big group out on track putting on an impressive but slightly premature show. With the slipstream so important for a laptime in Spielberg, the riders were certainly searching for it.

Overall, it’s Vietti who heads the provisional Q2 graduates ahead of Arenas, both courtesy of their FP1 times. Suzuki, Rodrigo and Arbolino’s best laps in FP2 see them complete the top five in that order, ahead of Alcoba and Fernandez in P6 and P7, respectively. McPhee beats Masia to eighth overall, with Deniz Öncü completing the top ten.

Foggia, Filip Salač (Rivacold Snipers Team), Binder and Sasaki are currently the final four set to move through, but with better weather forecasts this weekend, it remains anyone’s game in FP3. That’s what Ai Ogura (Honda Team Asia) will certainly be counting on, as he ended Friday in 16th and with title rivals Arenas and McPhee well ahead of him.

Tune in again to see the lightweight class jostle for a position in Q2 on Saturday morning, before qualifying from 12:35.