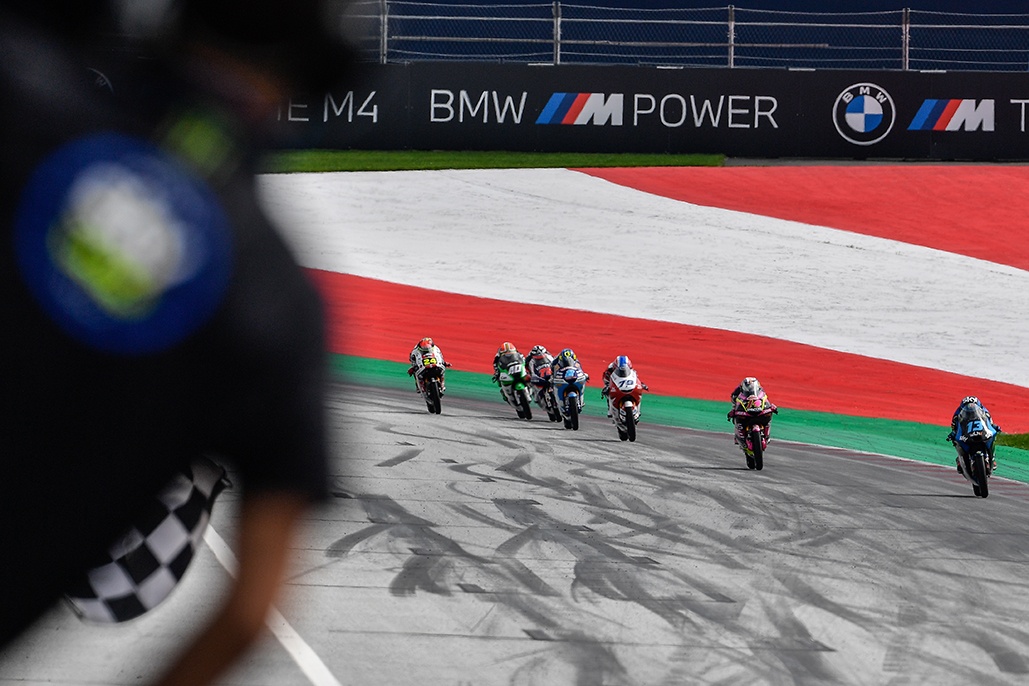 The Italian escapes the clutches of compatriot Arbolino for his maiden Grand Prix win, ahead of the ever-consistent Ogura in third.

Celestino Vietti (Sky Racing Team VR46) is now a Grand Prix winner, the Italian taking an impressive win in the BMW M Grand Prix of Styria to take to the top step for the first time. Tony Arbolino (Rivacold Snipers Team) took second – only just missing out on the win – with Ai Ogura (Honda Team Asia) as consistent as ever to take third and get back on the box.

Rodrigo got the holeshot from pole, but the Argentinean rider didn’t keep it long as Arbolino wasted no time in slicing through to the front. He led the front row starters – Gabriel Rodrigo (Kömmerling Gresini Moto3), Raul Fernandez (Red Bull KTM Ajo) and Tatsuki Suzuki (SIC58 Squadra Corse), in that order – with Ogura making a good start to slot in just behind them. Initially there was a small slice of daylight back to John McPhee (Petronas Sprinta Racing) and Vietti at the front of the second group, but that didn’t last long.

Darryn Binder (CIP – Green Power) took the baton and hunted the front down, striking quickly to take fourth from Fernandez once he’d arrived. And then there was a another shuffle as the South African had a wobble, allowing Arbolino, Rodrigo and Suzuki to get that daylight back. Again though, it didn’t last long – with 16 riders line astern in another classic Moto3™ battle.

And so it continued, although it was Vietti and Arbolino who seemed the men in control at the front. There was some drama though, first for the Red Bull KTM Tech 3 squad as a wobble for Deniz Öncü saw him unable to avoid his teammate Ayumu Sasaki – and both went down. After two impressive showings for the squad in Styria that was big disappointment, and the incident split the front group. A leading quartet of Arbolino, Ogura, McPhee and Vietti had a slight gap to Championship leader Arenas and with three laps left, it was all to play for. With two to go, Arbolino and Vietti had managed to emerge with a significant gap to the others – it would be an all-Italian duel for the win.

On the penultimate lap at Turn 9, the title race took another twist as well as McPhee suddenly slid out, losing his chance to fight for the podium and ultimately, second overall once the flag flew…

Up ahead though the final lap was underway and Vietti pulled the pin, crucially holding P1 down the long stretch between Turn 1 and Turn 3. But Arbolino was close and through Sector 3, rising over the brow of the hill, the Honda rider showed a wheel to the KTM ahead. Braking late, Vietti kept the lead into Turn 9 as the last corner approached… and was again a demon on the brakes. Arbolino almost lost the front too – crazy late drama just avoided – allowing Vietti a clear run to the line to claim his first Moto3™ victory.

Just behind, a cracking final lap saw Ogura pick up another podium in 2020 to hunt down Arenas in the Championship standings cutting the gap by three points to 25. Rodrigo picked up an important P4 in Styria, his best result of the season, and there was no double Red Bull Ring victory for Arenas as he was shuffled back into fifth. Binder crossed the line in sixth to claim two P6s at the Red Bull Ring and show some real consistency as 2020 rolls on, although Suzuki finished just 0.038 behind the South African, in seventh.

Fernandez continued his point-scoring streak with a solid 8th place finish, although the Spaniard had a lonely last couple of laps to finish 4.2 off the win. Nearly three seconds behind Fernandez was Stefano Nepa (Valresa Aspar Team) in ninth – his second top 10 of the year – and completing the top 10 was Estrella Galicia 0,0’s Sergio Garcia despite a Long Lap Penalty for track limits.

Dennis Foggia (Leopard Racing) was next up ahead of Filip Salač (Rivacold Snipers Team) in P11 and P12, with Andrea Migno (Sky Racing Team VR46) heading up a huge group as he fought back from a Long Lap Penalty too. Jaume Masia (Leopard Racing), Ryusei Yamanaka (Estrella Galicia 0,0) and Niccolo Antonelli (SIC58 Squadra Corse) were on his tail, the latter just losing out on points.

Now the hard-earned two-week break awaits the lightweight class before another triple-header, and Arenas still holds a significant advantage in the standings, with McPhee suffering his second DNF of the season to drop below Ogura once again. More curveballs will be in store at Misano, so come back for more then!

Celestino Vietti: “This is the best day of y life, a lot of emotions. I tried to manage the battle in the fist part because last week I was at the back of the group, I was all the race trying to overtake, in 10th position.. it’s very difficult in the last three laps to make a good result. Today we tried to stay in front and on the last lap I tried to overtake Tony, he ovetoook me and we had a battle, like when we were young, and the last lap I tried to make a clean lap, and I… finished first!”