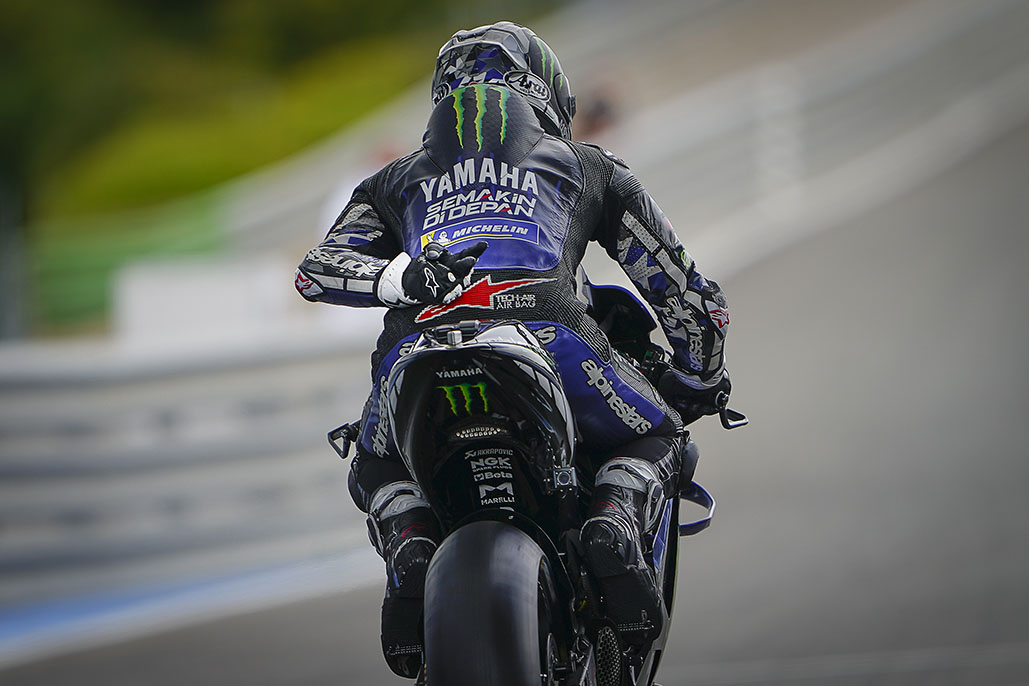 The duo pull clear at the top of the timesheets as Mir slots into third and Honda steal some headlines.

The post-race test at the Circuito de Jerez-Angel Nieto came to a close on Monday with Maverick Viñales on top with a 1:36.879, the Monster Energy Yamaha MotoGP rider putting in a characteristically busy day at the office as he did 101 laps. Alex Rins (Team Suzuki Ecstar) was second just 0.034 back, with Joan Mir making it two Suzukis in the top three although the reigning Champion was four tenths off Viñales as the duo on top pulled clear.

Yamaha were represented by Viñales, Franco Morbidelli (Petronas Yamaha SRT) and Valentino Rossi ((Petronas Yamaha SRT) as Fabio Quartararo (Monster Energy Yamaha MotoGP) sat the test out following his arm pump troubles on Sunday. Still, it was a busy day. Adding to Viñales’ full century at the top of the timesheets, in which the number 12 went a few tenths quicker than qualifying, Morbidelli did 67 laps and was P9; Rossi 73 laps for P12.

Morbidelli focused especially on braking and hopes improvements made will help in Le Mans. Both he and teammate Rossi also had a few new parts to try from Yamaha, including a front fender and swingarm.

Rins led the Suzuki charge and despite finishing the test just after lunchtime, the Spaniard put in 59 laps. Once again, he was testing the “possible” 2022 engine that he, teammate Mir and test rider Sylvain Guintoli tested in Qatar. He also worked on improving on used tyres, impressed with the pace as it was a step up on the weekend. He headed to Barcelona for a check up on his shoulder in the afternoon. Mir did 64 laps.

Takaaki Nakagami (LCR Honda Idemitsu) was the top Honda in the test as he was on race day, both times in fourth. He did 71 laps. Five different aero packages were seen at Honda between him, eight-time World Champion Marc Marquez (Repsol Honda Team), Pol Espargaro (Repsol Honda Team) and LCR Honda Castrol’s Alex Marquez, which gained a few glances up and down pitlane.

Nakagami tried aero, but then mainly focused on setup. He said he was more consistent and really comfortable, looking forward to Le Mans, and that the 2020 chassis is working well. He also warned against seeing that change back as something signifying the new chassis was negative. Teammate Alex Marquez also felt he made improvements on Monday, and did 75 laps to end the day in P15. That was just ahead of Marc Marquez as the eight-time World Champion only did seven laps, feeling some after effects of his crashes during the weekend.

Pol Espargaro focused on aero, electronics and ergonomics, things he says seem fairly small but when a rider is adapting to a bike, can make a big difference. He says he’ll remain on the same chassis, as he thinks there remains a good margin of improvement. The number 44 was spotted riding at least three different HRC bikes during the test though – his standard, one with different aero and a completely carbon coloured bike.

At Ducati, most recent race winner Jack Miller (Ducati Lenovo Team) was straight back to work on Monday as he and World Championship-leading teammate Francesco Bagnaia completed a combined total of 84 laps, one day after securing the Bologna factory’s first 1-2 since Brno 2018. Bagnaia was tenth, Miller in P18.

Zarco was the fastest Borgo Panigale machine, however, putting in 75 laps. The Frenchman said he was focusing a lot on suspension rather than new parts, looking for a way to get the full potential of the new bike. Stand-in teammate Tito Rabat also tested on Monday, P20 after 65 laps. Rookie Luca Marini (Sky VR46 Avintia) moved up into eighth after 66 laps after a good day’s work, with Enea Bastianini (Avintia Esponsorama) in P13 after 54 laps.

Pitlane reporter Simon Crafar reported new chassis to try for Red Bull KTM Factory Racing’s Miguel Oliveira and Brad Binder, but the two said the key focus was about the tyres. Oliveira said he was trying to make changes to make the bike work better on the softer front without compromising their existing positives. He found an improvement in pace and was pretty positive. Binder repeated Oliveira’s words that the focus was on making the softer tyre work, purposefully staying away from using the harder front that normally suits them better. He said they found something that seemed to make life a little easier and ended the day in P11 after 66 laps. Oliveira was top KTM in P7 after 72 laps.

Danilo Petrucci in the Tech3 KTM Factory Racing ranks was seen sporting a different tank/seat area, the Italian seemingly trying some ergonomics to improve his feeling on the RC16. He was P19 after 63 laps, teammate Iker Lecuona 64 in P16.

Aprilia Racing Team Gresini’s Aleix Espargaro had a tougher day at the office following his closest ever finish to the MotoGP™ winner, crashing early and then calling an early end to his test not long after, feeling under the weather after the incident although not sustaining any injuries. He ultimately did 12 laps and was P14. Lorenzo Savadori did 54 laps, however, and completed the timesheets.

That’s it from Jerez. It’s now next stop Le Mans, with the SHARK Grand Prix de France now less than two weeks away!

MotoGP™ eSport Championship finely poised after dramatic third round of the...