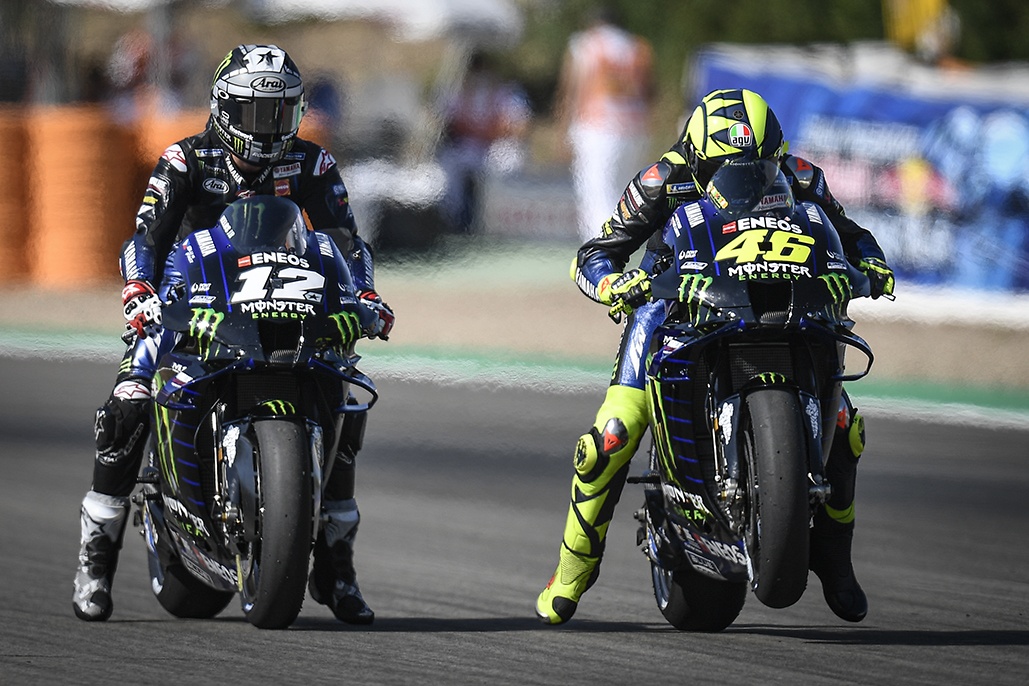 Monster Energy Yamaha duo go 1-2 on Friday as Binder leads a charge of three KTMs in the top six.

Maverick Viñales and teammate Valentino Rossi made it a Monster Energy Yamaha MotoGP 1-2 on Friday in the Gran Premio Red Bull de Andalucia, holding back an incredible charge from Red Bull KTM Factory Racing’s Brad Binder as the rookie completed the top three in another impressive showing at the Circuito de Jerez-Angel Nieto. Once again it was FP1 laps that decided the combined timesheets for many in the field, and a good few familiar faces need to move forward in FP3 to make it to Q2…

With the weather as scorching as ever in southern Spain and looking unlikely to change overnight, however, there is plenty time for the field to fight back to get into Q2, including Spanish GP winner Fabio Quartararo (Petronas Yamaha SRT) as the Frenchman ended the day outside the top ten once again – just as he did a week ago. It did get a little racy for ‘El Diablo’ in FP2 though, with Viñales tagging onto the back of Quartararo at the beginning of the session and the two heading round in a brief cat and mouse with a number of laps close together… and later in the session, the Frenchman kicked up some dust as he ran afoul of track limits too, although no harm done.

Rossi had a less dramatic day as the ‘Doctor’ was back near the top of the timesheets from his FP1 time, and remained within a couple of tenths of teammate Viñales in FP2 – something that could bode well after a podium for the latter last week, and given the temperatures in the second session mirror race time more closely. Protégé of sorts Franco Morbidelli (Petronas Yamaha SRT) was a fitting 0.046 off the nine-time World Champion on the combined timesheets too as the number 21 took P4 overall, ending the day as top Independent Team rider.

Then came the rest of the KTM armada, as the top six was a tale of two factories: Yamaha and KTM. Binder’s incredible P3, off the back of race-leading pace shown in the Spanish GP despite his early run off relegating him from the top ten, backs up both the South African’s speed and that of KTM. Teammate Pol Espargaro, despite a tip off, was fifth fastest on Friday and third fastest in FP2 after equalling the Austrian factory’s best dry weather result last week, and Red Bull KTM Tech 3’s Miguel Oliveira extended the impressive showing as he completed the combined top six.

Jack Miller (Pramac Racing) was the top Ducati on Friday as he took seventh, and the Australian had Takaaki Nakagami (LCR Honda Idemitsu) for close company as he took P8. The number 30 also became the first Japanese rider to top a full session since Shinya Nakano in 2006 as he scorched to the top in FP2, slamming in two fast laps for good measure. Aleix Espargaro (Aprilia Racing Team Gresini) was ninth quickest, with Andrea Dovizioso (Ducati Team) – Spanish GP podium finisher – completing the top ten overall.

Joan Mir (Team Suzuki Ecstar) beat Iker Lecuona (Red Bull KTM Tech 3) to 11th despite a crash for the latter, ahead of Johann Zarco (Hublot Reale Avintia Racing) in P13. The Frenchman was also crasher on Friday with a lowside tip off in FP2, but he also showed some impressive speed in the hot afternoon conditions and ended the second session of the day in second, just a tenth and a half off Nakagami’s FP2-topping 1:37.715. Quartararo was 14th on Day 1, one position ahead of where he finished last week on his way to winning that race, with rookie Alex Marquez (Repsol Honda Team) locking out the fastest fifteen on Friday.

Marc Marquez (Repsol Honda Team) did not ride on Friday, his plan is to return to action on Saturday. Fellow comeback kings Cal Crutchlow (LCR Honda Castrol) and Alex Rins (Team Suzuki Ecstar) did, however, ending the day in P20 and P21 respectively as they evaluate their respective conditions.

Come back for more on Saturday morning as the field head out for FP3 at 9:55 (GMT +2), before qualifying to decide the grid for the Gran Premio Red Bull de Andalucia begins from 14:10.