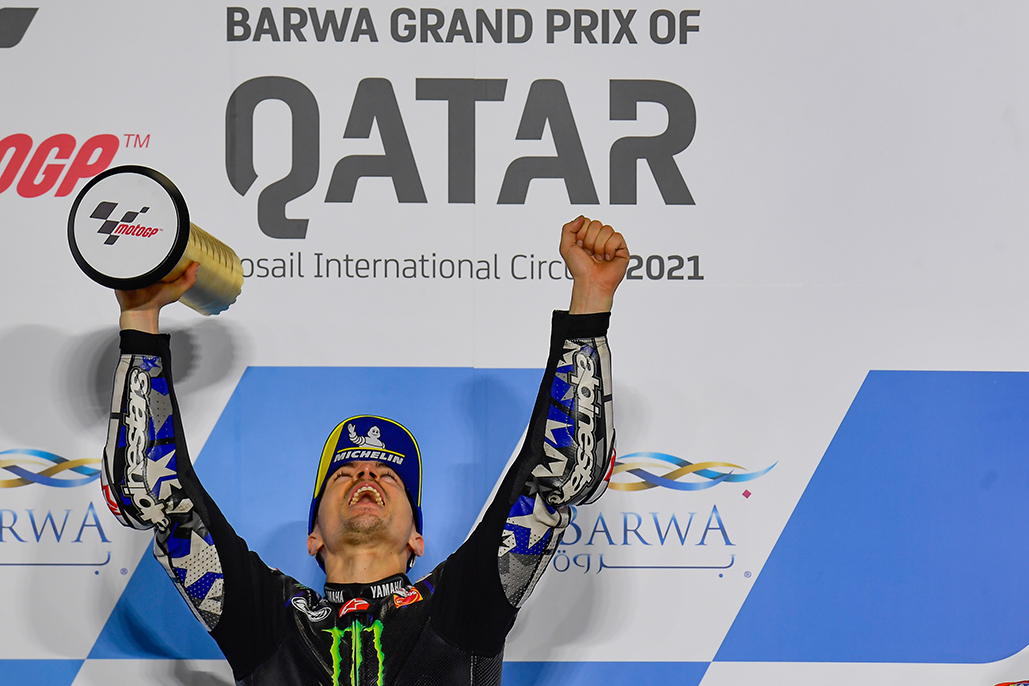 Top Gun shoots first in the desert as Zarco and Bagnaia fight off Mir at the final corner.

We wanted fireworks, and we got them. The first race of the 2021 FIM MotoGP™ World Championship was a cracker at the Barwa Grand Prix of Qatar as Monster Energy Yamaha MotoGP’s Maverick Viñales unleashed a stunning race to claim victory. The number 12 climbed his way through the pack to eventually beat second place Johann Zarco (Pramac Racing) by just over a second, with the Frenchman and Francesco Bagnaia (Ducati Lenovo Team) then pipping reigning World Champion Joan Mir (Team Suzuki Ecstar) on the run to the line to complete the podium on the opening night.

The start of the race was something to behold for Ducati. Bagnaia, Jack Miller (Ducati Lenovo Team), Zarco and Jorge Martin (Pramac Racing) – the latter from 14th on the grid – all propelled themselves to the front as Ducati once again proved themselves holeshot heroes, with Martin’s launch especially making some serious headlines as the rookie joined his fellow GP21 riders inside the top four. Fabio Quartararo and Monster Energy Yamaha MotoGP teammate Viñales got a little swamped off the line, forced to tuck in behind the Borgo Panigale invasion at the front.

Bagnaia had held on in the lead ahead of Miller, Zarco and Martin, before Zarco then slipstreamed Miller down the home straight and grabbed P2 off the Australian. After sluggish starts, the two factory Yamahas were regrouping though and soon found their way past high-flying rookie Martin on Lap 3. Just behind, Valentino Rossi (Petronas Yamaha SRT) was scrapping away with Alex Rins (Team Suzuki Ecstar) and World Champion Mir, the GSX-RR duo getting past The Doctor and starting to hound Martin.

Up top, the leading five were line astern. Quartararo and Viñales were attached to the back of Miller, good news for two Yamahas, as Pecco kept it steady in the lead. Quartararo wasn’t messing around, however, and El Diablo dived up the inside of Miller at Turn 15. The Ducati blasted by on the straight again but sensational work on the brakes allowed the Yamaha man to take and hold P3.

A couple of laps later, Viñales decided to pounce on Miller too. Turn 10 was the Spaniard’s chosen point and Miller then found himself down in P5 – was he struggling, or playing the long game? Meanwhile, In free air, Rins was reeling in the leaders and was soon right up behind Miller as well. Viñales was the man starting to look impatient though, right up behind Quartararo…

The lead group, covered by 1.4 seconds, was over two seconds up the road from seventh place Mir and by 12 laps to go, Viñales was up into P3 and immediately bridged the few tenths gap to Zarco. And with 11 to go, Viñales dived up the inside of the Pramac Racing rider for P2 and showed a wheel to race leader Bagnaia, most definitely meaning business. Just behind, Rins had also got the better of Quartararo and as the race entered the halfway stage, Mir and Aleix Espargaro (Aprilia Racing Team Gresini) were now tagged onto the back of the number 20 Yamaha too.

Viñales and Yamaha’s strengths in the middle of the corners were clear to see, and Turn 10 was once more was the chosen passing place for Top Gun. For the first time, the race leader wasn’t Pecco as Viñales struck on Lap 15, but the top eight riders were still covered by just 2.3 seconds. With Pol Espargaro (Repsol Honda Team) in P9 just 3.5 seconds from the lead as well, could the number 12 Yamaha pull away from the group?

It was a half second lead with six to go, as behind Zarco drafted Bagnaia for P2 into Turn 1 and Mir passed Miller to grab fifth. With five laps to go though, Viñales and Zarco were starting to break clear and Top Gun had eked out the lead to a 0.7 second advantage as Zarco, in turn, held a second over Bagnaia. Behind the latter, Mir was now ahead of teammate Rins for P4 as well. But Viñales was checking out and the gap seemed to shoot out to 1.6 seconds not long after, leaving the podium fight in the dust. Battle mode: engaged.

The podium scrap, meanwhile, was in full flow. Mir, at Turn 6, stuck his Suzuki up the inside of Bagnaia’s Ducati and suddenly, it seemed second place Zarco was under threat as well. As the last lap dawned, Mir was desperately trying to find a way past the number 5 but the Suzuki rider had to be patient. The move came though as the reigning Champion struck at the penultimate corner, leaving just one more apex and a run to the line standing between Mir and a phenomenal podium. The two Ducatis were about to prove just how quick they were in a straight line though, and as the Suzuki went ever so slightly wide at the final corner, Zarco and Bagnaia unleashed their grunt towards the flag – and just, just pipped Mir to the rostrum.

Viñales had already crossed the line well ahead of the squabble to start 2021 in style, however, winning at Losail for the second time and in a different manner to his 2017 victory. Zarco took second as top Independent and top Ducati, with Bagnaia debuting in full factory red on the podium in third and Mir just missing out.

Quartararo crossed the line three seconds behind his teammate in P5 as the Frenchman got the better of Rins by just three tenths, and two and a half seconds further down the road, Aleix Espargaro put Aprilia right in the battle with a fantastic P7. Aleix also beat younger brother Pol by just 0.056s as the latter put in an impressive debut with the Repsol Honda Team.

Miller, meanwhile, was forced to settle for ninth. The number 43 slid backwards in the latter stages and crossed the line back from where he would have wanted, looking to bounce back next weekend. Top rookie honours went the way of reigning Moto2™ World Champion Enea Bastianini (Esponsorama Racing) in tenth as just nine seconds split the Italian from the race win and he debuted in the top ten.

Stefan Bradl (Repsol Honda Team) did another top job standing in for Marc Marquez, the German finished P11 and leading 12th place Rossi across the line. Not the race The Doctor will have been looking for from P4 on the grid as he and teammate Franco Morbidelli suffered a very difficult evening – the latter finishing outside the points in P18 after an issue throughout. Miguel Oliveira (Red Bull KTM Factory Racing) was the leading KTM rider in P13, with teammate Brad Binder and fast-starting Martin picking up the remaining points on offer in P14 and P15.

That’s it from a stunning start to the season. Viñales was an unstoppable force in the desert for a second time and Zarco and Bagnaia ensure Ducati have something to shout about on a favoured stomping ground. Mir proved exactly why he and Suzuki are reigning Champions with a classy Sunday ride, and there are stories everywhere you look. Round 1 is now in the history books, and Round 2 right here at Losail is just around the corner!

Maverick Viñales: “Honestly I felt unbelievable. Actually the start didn’t go so well, I had a lot of wheelie. So it’s something we need to work on. But after that I felt the potential, I was taking everything with calm and saving the tyres for a good moment. I tried to be smart and calm, and chose the right place to push. Finally I opened a gap and I was trying to control the tyre and manage the power. Overall, so good. It was a fantastic weekend, just to say thank you to my really close family, now my wife… as you know we’re expecting a baby and you know, these results are amazing, everything is good and we’re really blessed. Just thank you.”