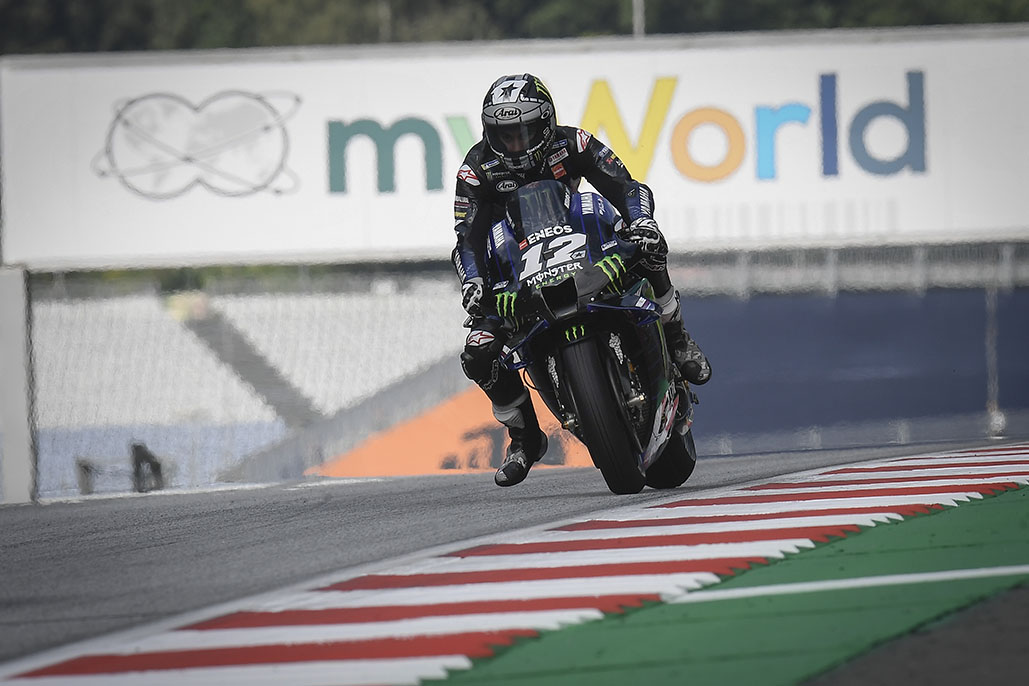 Yamaha hadn’t been on pole at the Red Bull Ring since the track returned to the calendar… until 2020, with Viñales heading a front row covered by less than a tenth.

For most people, a tenth of a second isn’t even the blink of an eye, but in MotoGP™ it can decide a lot. And in the myWorld Motorrad Grand Prix von Österreich, even less that that covers the three riders on the front row of the grid, with Monster Energy Yamaha MotoGP’s Maverick Viñales set to start from pole. Jack Miller (Pramac Racing) kept him honest in second, with Championship leader Fabio Quartararo (Petronas Yamaha SRT) completing the front row – just 0.087 off Viñales. The entire top 12 were covered by half a second, which is the closest we’ve witnessed since 2007.

In Q1 it was Brno podium finisher Johann Zarco (Esponsorama Racing) who came out on top and moved through, ahead of and alongside a jubilant Valentino Rossi (Monster Energy Yamaha MotoGP) after the Italian had missed the cut in the morning. Somehow though, there was a maybe even bigger talking point in the session – with Danilo Petrucci (Ducati Team) and Aleix Espargaro (Aprilia Racing Team Gresini) getting into some serious beef. They both just missed the cut too and will start P13 and P14 respectively, next to each other on the grid…

Once Q2 kicked off though, it was all eyes on Viñales as he came flying out the blocks first, before Quartararo then took over at the summit by a tenth. Soon enough, however, there were red sectors flashing up all over the timing screens, with the field all bang on the money from the off. Miller went P3 before Miguel Oliveira (Red Bull KTM Tech3), Pol Espargaro (Red Bull KTM Factory Racing) and Joan Mir (Team Suzuki Ecstar) then all exchanged the provisional third, but the Australian took it back as Viñales also truck back against Quartararo at the top.

That lap for the factory Yamaha rider got cancelled, however, and it was suddenly Quartararo back in the driving seat. Viñales wasn’t done there though, and the Spaniard went even quicker to set a 1:23.694 to take over at the top again, this time hanging onto it. Pol Espargaro then shot up to P5, just two tenths adrift, with Mir going third again. Andrea Dovizioso (Ducati Team) slotted into P6 at the end of the first runs, and Quartararo managed to closed the gap to Viñales as the dust settled – briefly – and some fresh rubber went in.

The lull in activity didn’t last long, and the hills were soon alive with the sound of MotoGP™ machines once again. The times were about to get even quicker, too. ‘Top Gun’ Viñales improved his time to move the goalposts, with Franco Morbidelli (Petronas Yamaha SRT) then going P3 to make it a provisional Yamaha 1-2-3 in Austria. Dovizioso was about to remind everyone of his stellar pace at the Red Bull Ring though, the Italian taking P1 away from Viñales for provisional pole… but it still wasn’t done.

2017 and 2019 race winner Dovizioso didn’t stay at the top for long. Viñales, following Mir, went back to the top of the timesheets to go over a tenth clear of the field as he bounces back in style from a tough race in Brno, and despite some red sectors for the likes of Dovizioso and Pol Espargaro, no one could quite manage to overhaul that lap. That makes Viñales the first premier class polesitter for Yamaha in Austria since Christian Sarron at the Salzburgring in 1988… not bad going at a traditionally tougher track for the Iwata marque!

Pol Espargaro’s initial threat to Viñales became a provisional third, but Dovi – after getting shuffled down by the KTM rider and Quartararo – hit back to push ‘Polyccio’ back off the front row himself. Was anyone going to be able to get amongst it in the final few seconds? You bet.

It was a Pol Espargaro and Jack Miller last chance dash at the end, and the Spaniard couldn’t improve but the Australian certainly did. It wasn’t quite enough for pole but the number 43’s final push split the Yamahas and sees Miller start second behind Viñales, with the ‘holeshot device’ primed, just ahead of Quartararo…

Dovizioso will head up Row 2 just after he announced he will be leaving Ducati at the end of the season, with the Italian veteran and two-time Austrian GP winner not losing a grain of focus as he prepares to push for a third victory. Pol Espargaro lines up fifth and is another, like Dovizioso, who seems to have some serious race pace… they will certainly be hoping they can bypass the likes of Viñales, Miller and Quartararo in the early stages. Joan Mir starts sixth after an impressive Q2 for the Spaniard, edging out Brno podium finisher Morbidelli.

The number 21 Yamaha heads up the third row ahead of Alex Rins (Team Suzuki Ecstar), with Czech GP poleman Zarco with more work to do on Sunday in Austria if he’s to grab a repeat podium finish. It’s ninth for the Frenchman, who finishes 0.044 ahead of Takaaki Nakagami (LCR Honda Idemitsu). Oliveira briefly owned a provisional front row place but will start 11th, just 0.489 from pole, with Q1 graduate Valentino Rossi ending Q2 in 12th… despite finishing only 0.545 off his teammate’s time. It is, after all, the closest top 12 in over a decade.

That’s it from Saturday, with only half a second covering the Q2 field and even more stories down the order. Czech GP winner Brad Binder (Red Bull KTM Factory Racing) will start 17th as the last KTM rider, with fellow rookie Iker Lecuona (Red Bull KTM Tech3) starting just ahead of him. Ahead of that, meanwhile, Row 5 is jam-packed with experience, speed and that small slice of beef with Petrucci and Aleix Espargaro joined by Cal Crutchlow (LCR Honda Castrol).

Got your breath back yet? Viñales grabbed the bull by the horns on Saturday at the Red Bull Ring, but who will come out the fight on top on Sunday? And what will the skies look like as race day dawns? Find out if the Ducati dominance in Spielberg will come to an end at 14:00 local time (GMT+2)!

Maverick Viñales: “I’m really happy because the objective was the front row but suddenly I felt an incredible feeling with the bike, also in FP4 from this morning we’ve made a really big improvement, the team has done a really good job. We need to try to understand for tomorrow’s race what will be the best tyre but the bike is working fantastic, very different to Brno. So I’m very happy and enthusiastic and we know on one lap we’re very fast.”