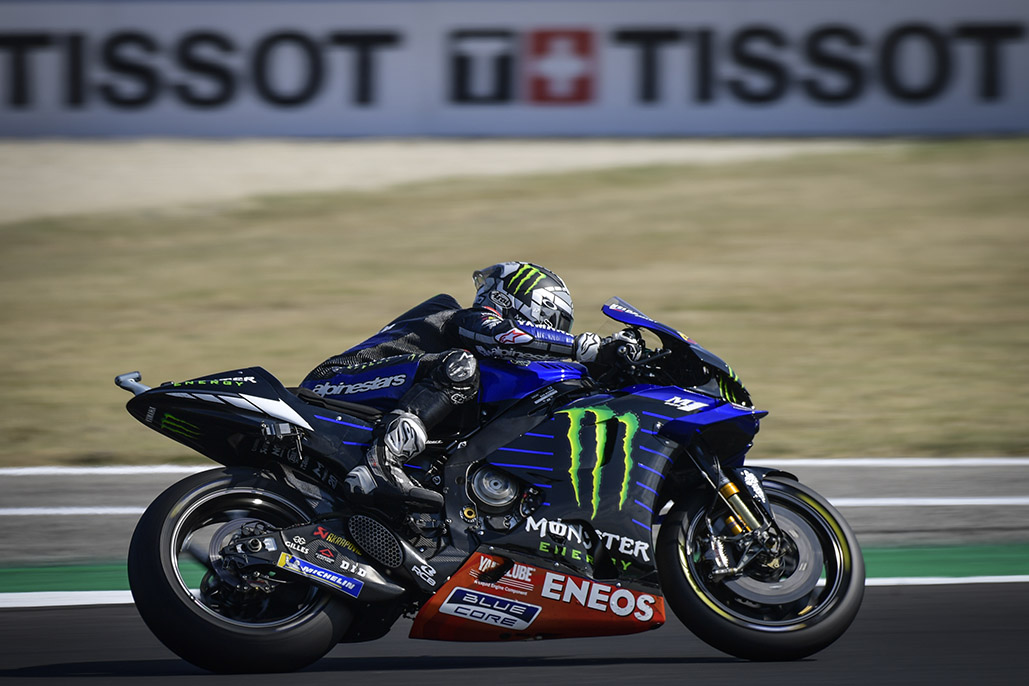 The Spaniard escapes Miller by less than a tenth, with Quartararo third and Bagnaia missing out as the Italian has his final flying lap cancelled.

Maverick Viñales (Monster Energy Yamaha MotoGP) has done it again. A week on from pole at the San Marino GP, the Spaniard slammed in 1:31.077 to set a new lap record in qualifying at the Gran Premio TISSOT dell’Emilia Romagna e della Riviera di Rimini, taking his third pole of the season and third in succession at Misano when including 2019. It was still pretty close, however, with Jack Miller (Pramac Racing) cutting the gap to 0.076 as the Australian leapt up the timesheets to take second on the grid, with Fabio Quartararo (Petronas Yamaha SRT) taking third to lock out the front row.

Sunny skies on the Riviera di Rimini since the paddock arrived have seen the times tumble and tumble, right down to another new lap record in Q2. On the way there though, there was Q1 to decide first and it was a real shootout. In the end, Miller was the man on top, with Andrea Dovizioso (Ducati Team) in second as two of the key contenders moved through to fight it out for the top 12.

Once Q2 was underway, it was a familiar story for Viñales: two stops, three runs. He was the man on top first as Bagnaia slotted into P2, but then the Italian really got the hammer down on his second lap – a 1:31.313 handing the Pramac Racing rider provisional pole. Quartararo then slotted into P2 less than a tenth off ‘Pecco’, with Red Bull KTM Factory Racing’s Brad Binder slotting into third ahead of Viñales and teammate Pol Espargaro.

Quartararo was right on the money again though, just 0.032 off Bagnaia coming through Sector 3, but the Frenchman made a mistake coming into Turn 16 – lap over. That was the first runs down for most but as the field filed in, Viñales was back out.

Already on his second run, ‘Top Gun’ was flying. The number 12 nailed the lap to the end but he still didn’t quite manage to beat Bagnaia, 0.073 off and forced to reload for another run at it. Next time around the Spaniard was a quarter of a second up through the first sector and it looked like this might be it, but he lost time in the middle of the lap – with just 0.013 covering him and Bagnaia into the final sector. Viñales was on rails through Sector 4 though and sure enough, a Yamaha was at the summit – a 1:31.268 was now the time to beat for pole position.

Meanwhile Joan Mir (Team Suzuki Ecstar) – one of the pre-race favourites – was lingering down in P10 after his opening few flying laps, one-lap pace still seemingly hampering the Spaniard and Suzuki on Saturday afternoons. Dovizioso was P8 heading into the final three minutes, and his nearest title rival Quartararo P3. With two minutes to go though, Dovizioso found some time and moved up into P6 – a provisional second row start.

Tucked in behind VR46 Academy protégé Bagnaia, Valentino Rossi (Monster Energy Yamaha MotoGP) then improved from P9 to P5, shuffling Dovizioso onto Row 3, as Binder and Bagnaia lit the timing screens red. The South African moved into P3 with a great lap, but an even greater one (kind of) was coming in for Bagnaia. The Ducati rider rounded the final corner with Rossi and Miller in tow and it was a scintillating 1:30.973, the fastest ever lap round Misano, but it had looked outside track limits… and it ultimately was. Bagnaia’s record-breaker was cancelled for the infraction on the exit of Turn 16 – the same thing that had bitten Viñales earlier in the season.

Miller’s lap, meanwhile, put him second and then provisional pole as Bagnaia’s lap disappeared off the screen, but Viñales was still out on the hunt. The San Marino GP polesitter would take the chequered flag in P1 with another new Misano outright lap record, making it three poles in a row for Viñales, and Yamaha, at Misano as well as Viñales’ fourth overall at the venue. That, in turn, sees him equal Jorge Lorenzo for most MotoGP™ poles at the track.

Quartararo set a personal best on his last lap to claim P3, 0.069 off Miller, with Pol Espargaro just beating Bagnaia’s valid fastest time to give the KTM rider his second best qualifying result of the season. Bagnaia didn’t seem too disheartened in fifth, however.

Binder joins his KTM teammate Pol Espargaro on Row 2 after qualifying in sixth, which is also the rookie’s best Saturday afternoon result of 2020. Rossi spearheads the third row in P7, The Doctor just three tenths away from Viñales’ time, with the nine-time World Champion sitting ahead of San Marino GP winner Franco Morbidelli (Petronas Yamaha SRT). It was P8 for Morbidelli this time around, who is nursing an illness this weekend.

Danilo Petrucci (Ducati Team) eventually got the better of teammate Dovizioso and the factory GP20 machines will line-up P9 and P10 for the Emilia Romagna GP. What can the title chase leader do from P10? And what can Mir do from P11 on the grid? The Suzuki rider has been one of the leading contenders throughout the weekend, but finishing outside the top 10 in Q2 wasn’t how the script was supposed to go – although it’s only 0.540 covering the leading 11 riders. Takaaki Nakagami (LCR Honda Idemitsu) will want more too, the Japanese rider having crashed at Turn 15 in the early stages. Rider ok, and P12.

The top six in Emilia Romagna GP Q2 were all faster than last week’s pole position, but it’s the same man emerging at the top. Viñales will again launch from pole at Misano, but he’ll be hoping the story of the race plays out a little different his time around. Judging from the Free Practice timesheets, the Emilia Romagna GP is going to be electrifying, so don’t miss any of the action when the lights go out for the MotoGP™ race at 14:00 local time (GMT+2) on Sunday afternoon.

Maverick Viñales: “I feel good, FP4 was really good, much better than the other race! I struggled a lot on Friday and in FP3 especially in the first laps, but I was trying to work on race setup .It feels like we made an improvement from last weekend, which makes me much calmer and more ready for tomorrow. We’ll try our best, the team did a great job especially this morning, and on the last exit we found something good. I worked hard on race conditions and I hope it pays off tomorrow.”